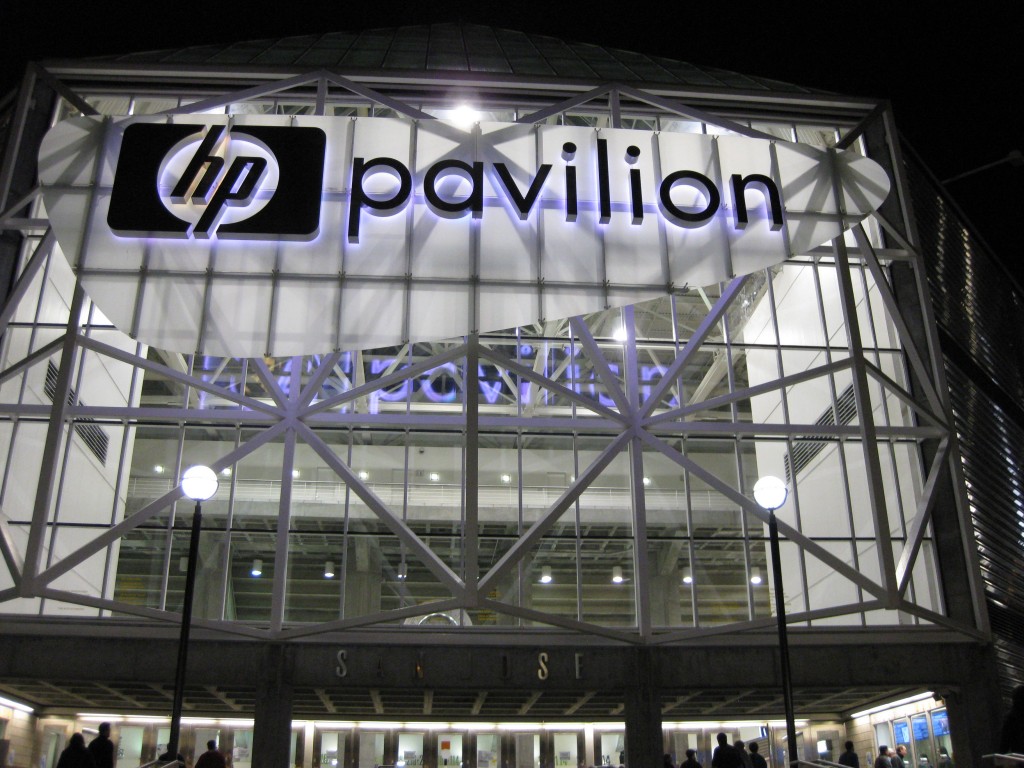 (Editor’s note: This Itinerary is for the arena formerly known as HP Pavilion — thus the old references and pictures with old signage.)

One day, me and my pal J-Park were talking hockey. He’s all about Team Teal, the San Jose Sharks. He sometimes rocks a somewhat old-school Patrick Marleau jersey from when he was still captain (yeah, I know, it was only a season ago, but still). My allegiances are with the Los Angeles Kings, from my schoolboy days growing up in Southern California when Wayne Gretzky came along and caused a whole bunch of people who had no business liking hockey to like hockey. I still have a silver-and-black Kings jersey of one of Gretzky’s old teammates, Mike Donnelly, from those days hanging in my closet. Remember Mike Donnelly? Yeah, I didn’t think so.

So we’re talking, and then it hits us — the Sharks and Kings are in the same division! They play each other four times a year! Next thing you know, the two of us, along with Mrs. Fan, are making plans to drop in on HP Pavilion, where a bunch of crazies wearing teal gather for a pretty cool hockey experience.

The arena is just about directly underneath the flight path for planes approaching San Jose’s airport, so the whole time before the game we were oohing and aahing as jets passed overhead (my sister, an aviation freak, would’ve loved the view). That’s not to say the best way to get to the game is by plane, but it seems like the arena is dead center in terms of transportation options in San Jose — CalTrain, the Bay Area’s version of commuter rail, and Amtrak have stops nearby. Which is good, because for the car-dependent, you’re shelling out 20 bucks to park in the arena lot, which is what we did. And in California, whenever you plan to go somewhere where there’ll be a lot of people by car, you pretty much have to accept the fact that you’re going to empty your pockets to stash the darn thing for the evening. There are also the usual side lots that decrease in price the further you get from the arena — you have to drive around a bit to find the cheaper ones but they’re not too hard to find.

We bought tickets about two weeks in advance from StubHub, which was about the only way we could get three seats together (as it turned out, the game was sold out). We chose it over Ticketmaster’s Ticket Exchange, the “official” Sharks ticket resale site, simply because we could get three seats together that weren’t behind one of the nets. We landed in Section 216, facing the zone which the visiting team attacks twice, but we wound up in the very last row, which just goes to show you that life’s full of trade-offs. 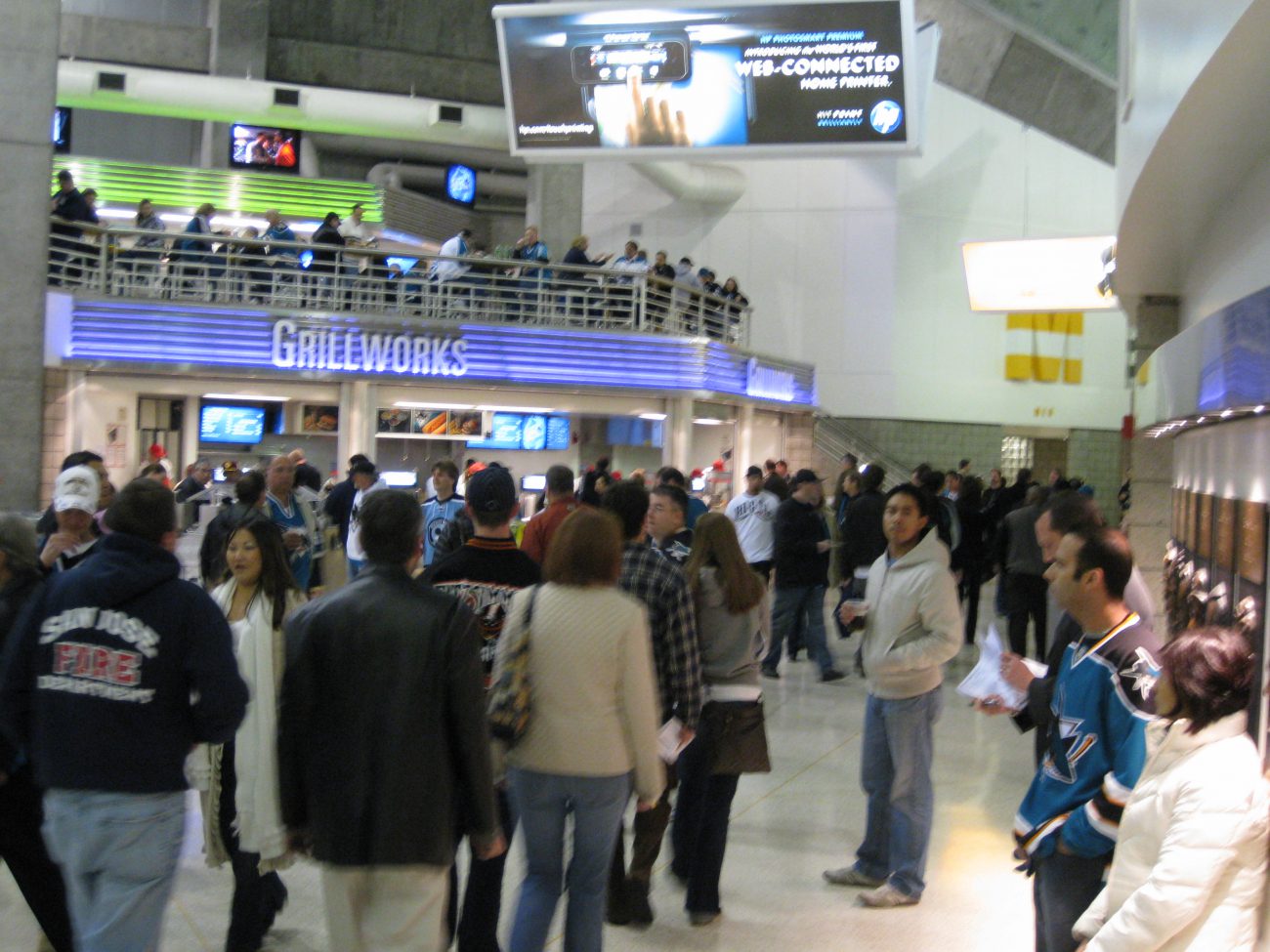 Give downtown San Jose props for having stuff to do around the arena, a concept not every municipality gets. We arrived at the arena more than two hours before the game with the intention of finding a place to eat beforehand, and based on word-of-mouth we chose to go to Henry’s Hi-Life, a BBQ joint about two blocks away. Besides, if it’s good enough for this guy, it has to be good, right?

Never mind the fact that it’s kind of a creepy two blocks (you walk past a few random houses and industrial buildings to get there) and the fact the place is smaller than my living room (my elbow kept bumping up against some blinds that were covering a window next to our table) — the ribs were darn tasty. J-Park indulged in some chicken (that’s all it said on the menu: “Chicken”) and afterward declared it his new favorite pre-Sharks game eatery — high praise coming from a longtime attender of Sharks games such as himself. 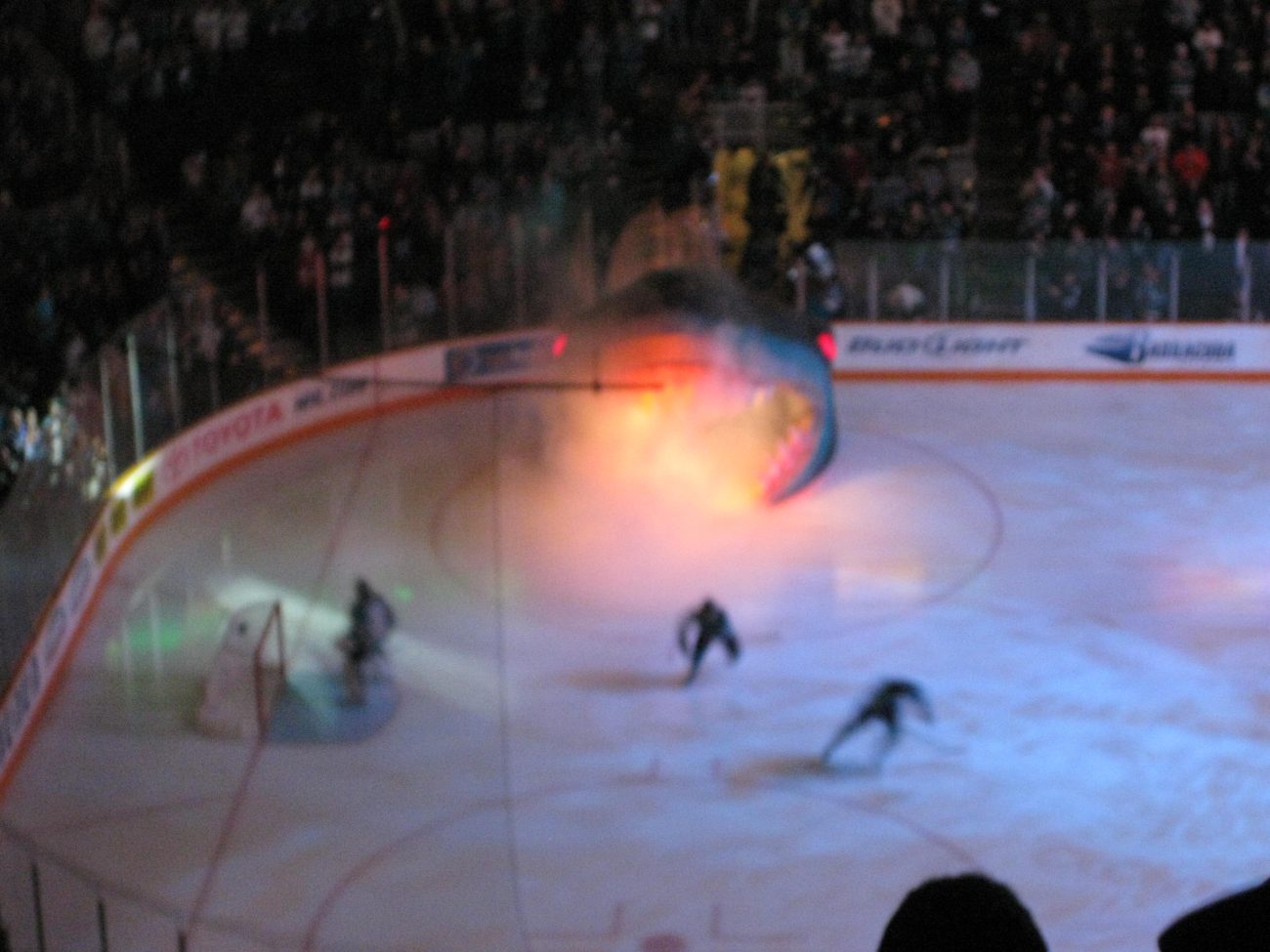 I’m usually suspicious of rectangular, square or otherwise four-sided arenas — it usually means they’re old and dilapidated. HP Pavilion somewhat falls into that description (rectangular, not necessarily old), but it appears well-maintained and highly serviceable. The one complaint I have with it (and this is purely personal taste) is that there’s only one main concourse with entrances to both the upper and lower seating levels. Many arenas around the country are built this way, but if you’re going to pull it off successfully, the concourses should also be wide enough to accommodate everybody milling about, especially when everyone’s leaving after the game. The two large atriums on either side of the arena are nice, but there were some spots where things got a little bit narrow.

Otherwise, we were all glad we ate before going in. The concession stands looked a bit bland, offering the usual stadium fare. There was a BBQ stand and a sushi joint (the latter looked extremely popular), but both required climbing up stairs to get to and aren’t totally obvious to the fan who’s just roaming around.

As previously mentioned, we were in the very top row of the arena, but the view was still good — not too far up or too far back. And we had a great view of what just might be the best entrance in hockey, when the Sharks come skating out of a shark’s mouth billowing smoke.

The game went my way and not J-Park’s… the Kings scored three first-period goals and walloped the Sharks 6-2. Mrs. Fan did the politically correct thing and donned a Kings jersey, but she had six — count ’em, six — opportunities to stand up and cheer the Kings and passed up each one. Major Kings-fan fail.

Love it! Well, not the result but the rest was great times!!!

I never said I was a true Kings fan. I was only promoting domestic harmony. I didn’t promise to cheer.

Now, had we been at a Steelers-Chargers game…

hi, great story! was just wondering, the pic you took from your seats, did you zoom in or is that how the view really looked like? just wanted to know since i got concert tickets at that exact level. thanks!

Thanks, Eva! I think the photo was zoomed in slightly, but the view is pretty good. We were in the very, very last row of the upper deck, and I didn’t have any problems seeing. For concerts, I’m not sure where they’d put the stage, so that might have an influence on how good your view is. Thanks for reading!

[…] to watch sports as much as I do. That’s where pal J-Park comes in — we’ve seen a few games together, and when he told me about his plan to go see four ballparks in the Midwest this summer, it became […]