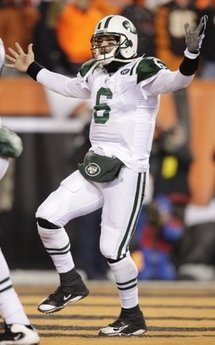 When you’re a sports fan, there’s nothing better than when your team reaches the playoffs. You know, YOUR team — the one you normally call a bunch of bumbling knuckleheads and make you throw things at the TV and cause you untold misery when your friends tease you about how your team is a bunch of bumbling knuckleheads that make you throw things at the TV. And when they do reach the playoffs, and advance and do well, they make your chest swell out with pride so much that you find yourself doing highly irrational things. Like, say, digging underneath the cushions of your couch for a few extra cents to pay for your electric bill now that you blew your entire month’s budget on those playoff tickets you bought on a whim because you were so irrationally proud of your team.

I say all of this, of course, at the end of the first weekend of the NFL playoffs, which admittedly produced three snoozers and one game dripping with awesome outrageousness. I thought I was being a hardcore fan buying tickets to the Chargers’ playoff game next weekend even though I live about 500 miles away from San Diego — but when you think about it, it wasn’t so crazy. I can, and will, drive to San Diego. I have relatives there (at least, Mrs. Fan does) that I can crash with. I had more than two weeks to plan this out, since the Chargers clinched a first-round bye in the second-to-last week of the regular season and would play at home Jan. 16 or 17 no matter what transpired over the weeks in between. Logistically, there were no weird obstacles to overcome.

Now meet Jersey Boy. He’s a crazy Jets fan and a friend of ours from our days living on the East Coast. His team, by many accounts, had no business being in the playoffs. But they made it, and when they dismantled the Bengals on Saturday, he entered into that state of euphoria described above. When the Ravens beat the Patriots on Sunday, assuring that the Jets’ next game would be in San Diego, his immediate response was to message Mrs. Fan inquiring about our plans because, darn it, he wanted to be in San Diego next weekend too. He checked flights with the intention of flying cross-country for the weekend so that he could be at the game (and, presumably, not miss a day of work), and found a round-trip fare for less than $300 from Rhode Island — a steal considering the circumstances.

Today, he solidified his plans — he will fly into San Diego on Sunday morning, attend the game, and then take a red-eye home that evening. Now that’s dedication.

I’ve got a few interesting links to share (and if you followed me on Twitter at @itinerantfan, you would already know about these links and would be in the loop instead of having to look at these individually now):

I was considering going to similar lengths if the Eagles had actually showed up on Saturday night. Bumbling knuckleheads …

[…] the first step in the Chargers’ long-awaited Super Bowl run. Meanwhile, our friend Jersey Boy made an impromptu cross-country flight hoping to see his beloved Jets continue to shock the football world. We showed up at the stadium […]

[…] Qualcomm Stadium last Sunday from a visiting fan’s perspective. After all, he was the one who flew cross-country to be there, not me. So I’ll let him take it away, and I’ll stand back and try not to let the […]