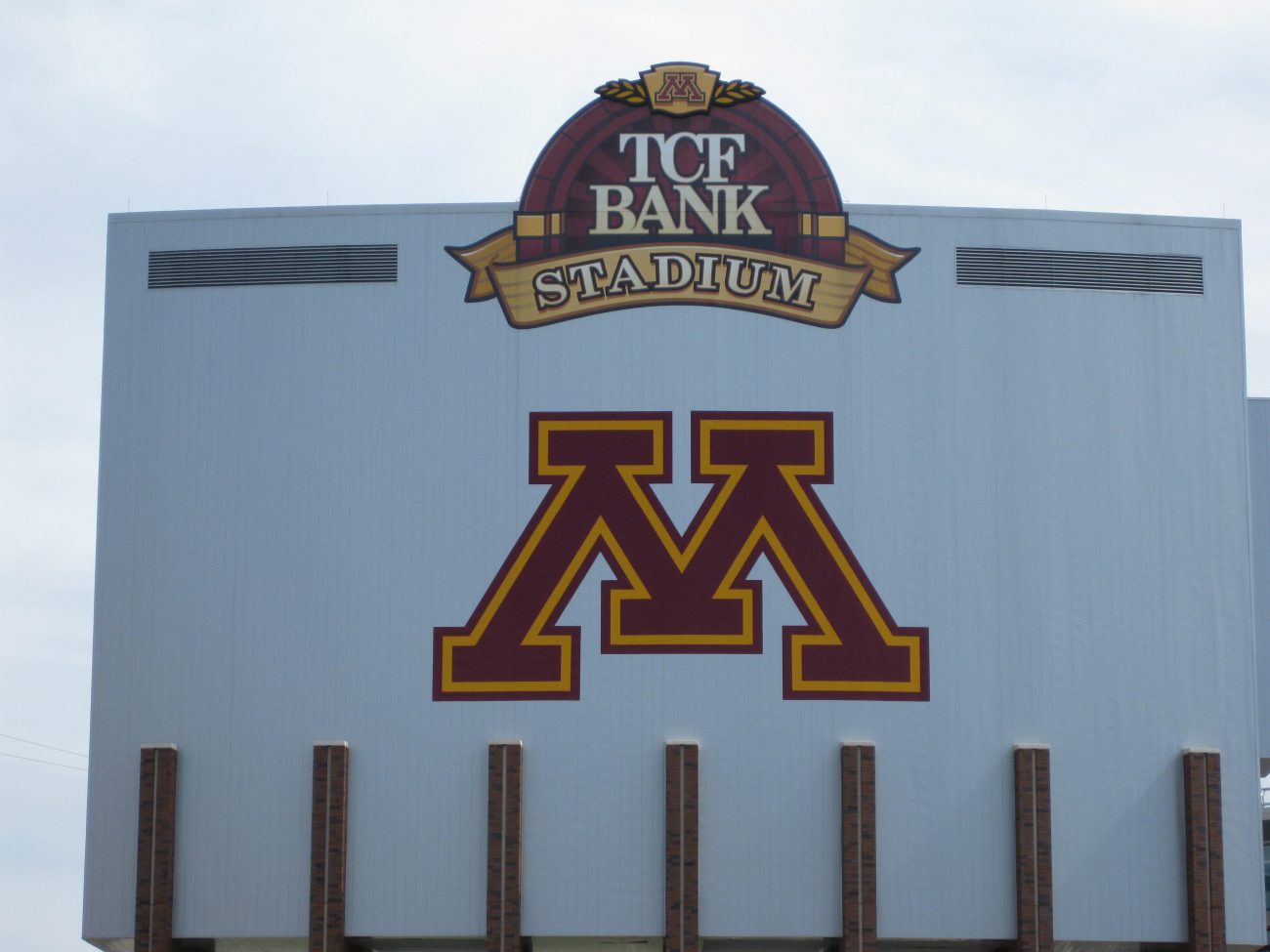 This is my first college football-related Itinerary since I started this blog, and it’s the University of Minnesota. I know, not exactly a place casual sports fans are dying to see. Why not Florida, or LSU, or Ohio State or a place like that? Well, if you went to a college that has a well-known football program, you go where it goes, with almost no exceptions. And that was my lot in September when I found myself in Minneapolis going to see a University of Minnesota home game at TCF Bank Stadium.

(OK, so I finished that paragraph without mentioning which school I attended. If you read this blog regularly, you know I’ve alluded to it many times, and said the school’s name many times too. If you just stumbled upon this post and would like to know without scrolling through countless other pages of my blather, I’ll give you a few hints: They wear a shade of red and a shade of gold, they have a wonderful fight song that many outsiders consider annoying for some reason, and they did not go to a bowl game in 2010 for reasons that are totally justified.)

Anyway, Minnesota football fans are as nice as their campus is big. Plus they got a shiny new stadium to boot, which made the experience of watching their team lose to mine that much better. 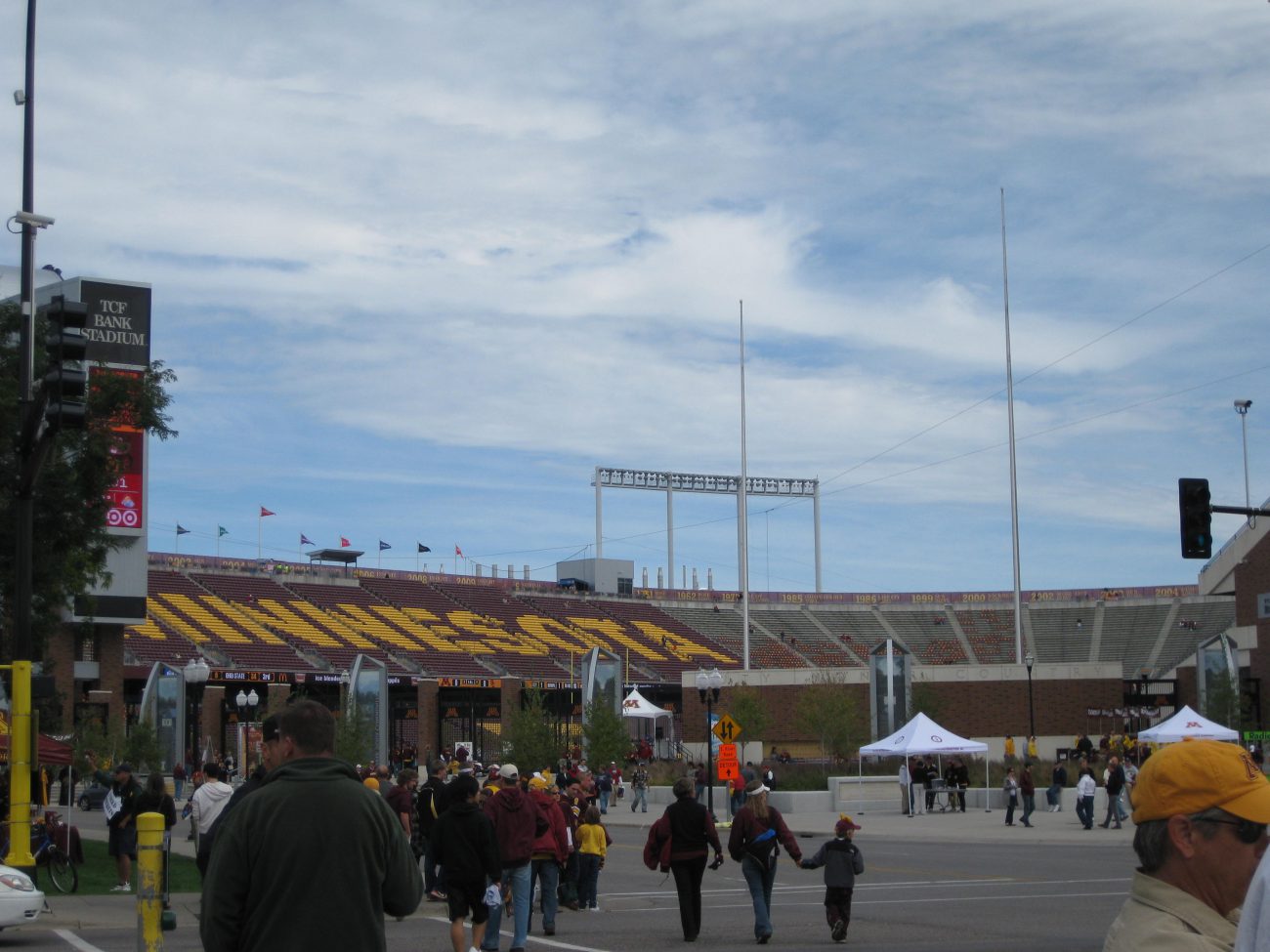 One of the cool things about Minneapolis is that you can get most places worth visiting pretty easily, either on foot or via public transit. For a while, though, it seemed the only exception was the U-M campus on a football Saturday. Mrs. Fan and I left our downtown hotel at about 11 a.m. for a 2:30 p.m. kickoff, intending on walking the entire way to the stadium — a distance, I estimated, of a little less than two miles.

There’s just this little obstacle called the Mississippi River in between, though, and getting over it is more difficult than it seems. Not because there aren’t more than a few options for crossing, but because along the way the neatly laid-out downtown streets get a little fuzzy from a visitor’s point of view. Finding that bridge to cross was the most difficult part. We got to the Metrodome, on the eastern edge of downtown, and from there the only route east seemed to be a highway with no sidewalks. Fortunately we had passed by a bus stop where a bunch of people in football jerseys were waiting, and we backtracked to it and crammed ourselves onto a bus that led us over the river, under a building (seriously) and into what was unmistakeably a college campus.

We wound up on Washington Avenue, and the sidewalks were growing more and more crowded the more we continued. We finally stepped off the bus with the stadium in sight, and went to, of all places, a Dairy Queen. Never mind the fact that it was about 50 degrees outside and we’re from California.

As an aside, after the game we found the crowd waiting for the bus about 10 times bigger, so we started walking west along Washington Avenue. At some point we wound up alongside a kindly middle-aged man with long hair, holding a pizza box. He deduced that we were visitors and told us to follow him to get back to downtown, since that’s where he was going anyway. He then led us through the campus, along some walkways we would have never thought to use ourselves, then across a pedestrian bridge over the river, through a quaint little neighborhood, and finally to a area where we could see the Metrodome and thus knew where we were going from there. All told, it took us about an hour to get back to our hotel on foot, which proves you can walk to the game from downtown if you knew where you were going and had some comfortable shoes on.

(By the way, just so I don’t leave you hanging: The man acquired the pizza from some guy representing Domino’s who was handing them out outside the stadium as a promotion — or at least that’s what he told us.) 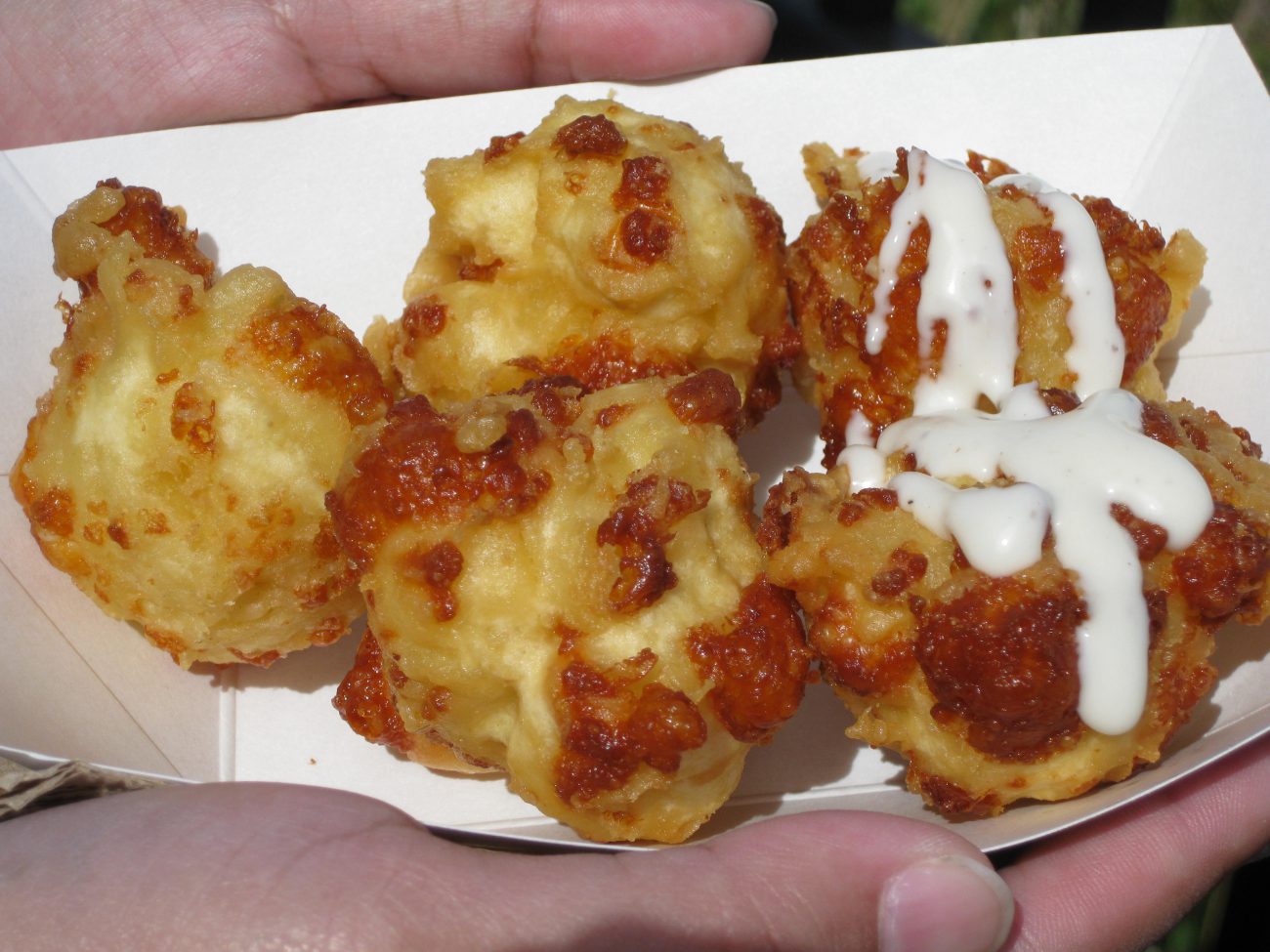 One of the great things about traveling is being able to put yourself in the shoes of those who live in a particular region and experience things that are probably weird to you but absolutely normal to them. That spirit is how we came to discover fried cheese curds. Apparently they’re all over Minnesota (I think they’re big in parts of Canada too) but good luck finding them wherever you are if you’re not in the upper Midwest.

Anyway, there are stands around the perimeter of the stadium with big signs screaming out “CHEESE CURDS,” and they sell them two ways: regular and jalapeno. And they’re ridiculously simple to make. I know because I watched them make it. They had a bowl of what basically looks like really thick white batter, and they used a disher to scoop out portions and drop ’em into a deep fryer. A few minutes later they come out ready for you.

If you’ve never had cheese curds before, you’re probably thinking of fried mozzarella sticks. I don’t blame you for thinking that. But these are better — much better. First off, they’re not breaded, but they still have this crispy outer coating when they’re done. And cheese curds by nature have a firmer consistency when they’re cooked/melted than regular cheese. Just trust me, they’re worth it, especially at $5. I didn’t spend three paragraphs on it for nothing.

Besides, there isn’t too much going on pregame that doesn’t happen on any other college campus. There are the usual clusters of tailgaters and the usual private parties that you’d have to pay to get into. If you’re not planning to tailgate, your best bet is to stay along or near Washington Avenue, where there are several watering holes and eateries that are well-frequented by students. We were content with our Blizzards and cheese curds, so we entered the stadium a good hour before kickoff. 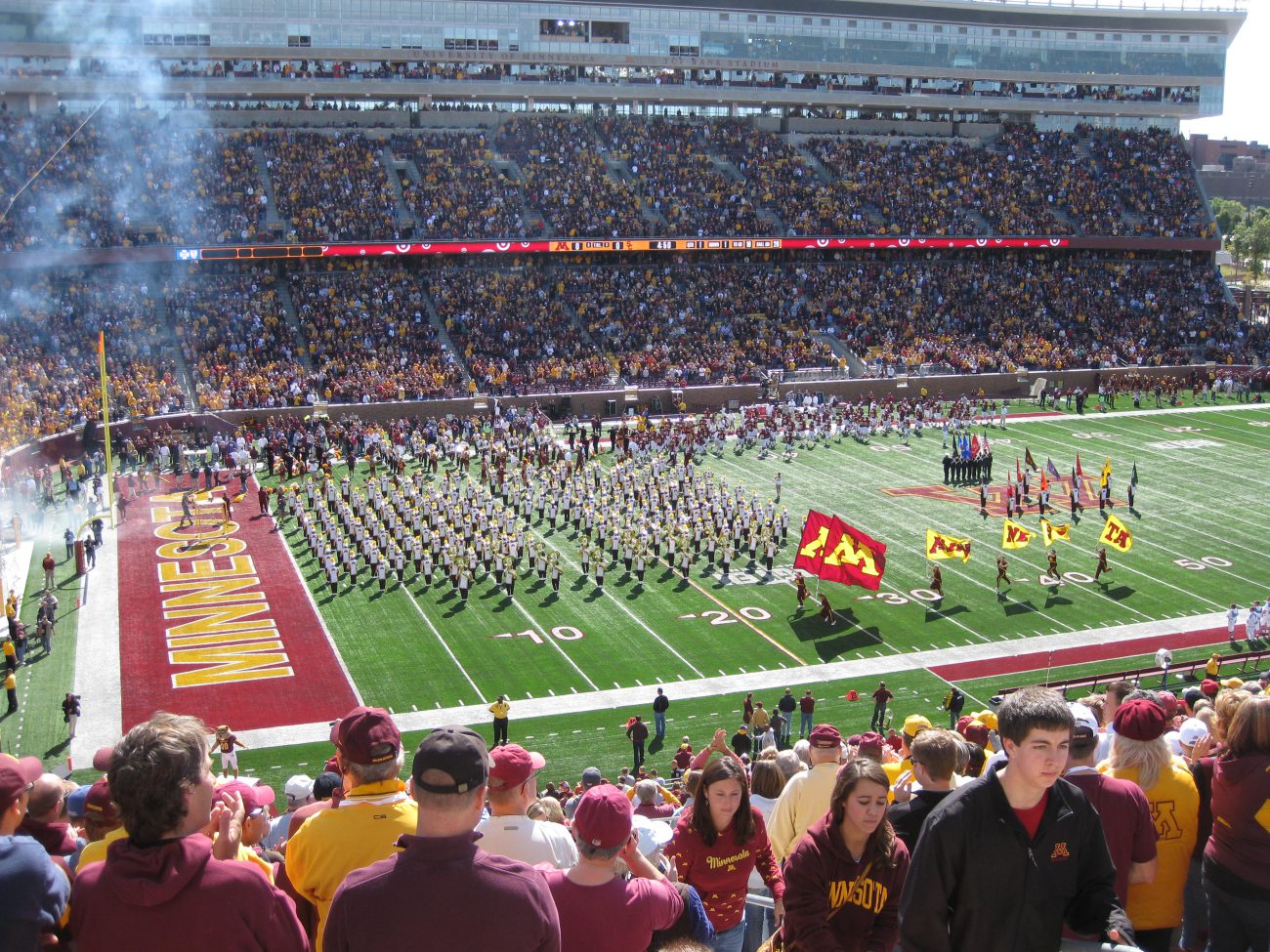 We had this trip planned for months, and as the date got closer I’d occasionally check the Golden Gophers Web site to see when tickets for the game would go on sale. Finally, sometime in August, they put single-game tickets on sale for every home game… but this one. StubHub it was. And by this point prices were a little exorbitant, but we had no choice but to open our wallets.

Anyway, you can usually tell where the visiting fans sit by A) where the cheapest tickets are and B) by looking for the back rows of the stadium. So I followed that for the most part and wound up being wrong on both parts — I was on one of the goal lines, and other than the couple next to us, completely surrounded by Minnesota fans. They were super nice, though, and not overly obnoxious like some fans can be. I carried on a conversation throughout the game with the guy behind me about our teams and about Minnesota sports in general. Minnesota fans also do some weird spellout/chant involving twirling fingers that I had a hard time understanding, and their band/student section loves throwing their programs in the air (or maybe they were just unhappy with the way the game was going).

This stadium, despite being only a couple years old, follows the standard many other college-owned stadiums have set: installing nice seats (meaning, seats with backs) only in the prime areas where the rich alumni sit, and for everyone else, metal bleachers with numbers designating where you park your ass. Although if you were a season-ticket holder and wanted to pay a few bucks extra, you could buy a portable cushion/seat back combo that stays in your seat all season (or at least I think it does, judging by how many were left in place at game’s end).

For a venue that seats 50,000, it’s fairly intimate — we were about 3/4 of the way up and weren’t far from the field at all. My biggest complaint (and maybe this is an obsessive-compulsive one) is, why couldn’t they put the big scoreboard dead center in the end zone? It was off to the right side, and surprisingly difficult to view from the angle we had. Also, despite a wide concourse, it was big-time crowded just before game time and at halftime. Yes, I know it’s like that everywhere, but either people hang out unnecessarily down there or they move really slowly.

[…] course, we visited both the Metrodome and TCF Bank Stadium earlier this year. Check out what we thought of the two stadiums, won’t […]

Pack your bags and see some hockey! « The Itinerant Fan

[…] schedules and see if we can do things like go to Minneapolis and watch a Twins game one night, see USC play Minnesota the next day and then see some guy named Brett Favre hurl a football to top the weekend. (Sadly, it was too […]