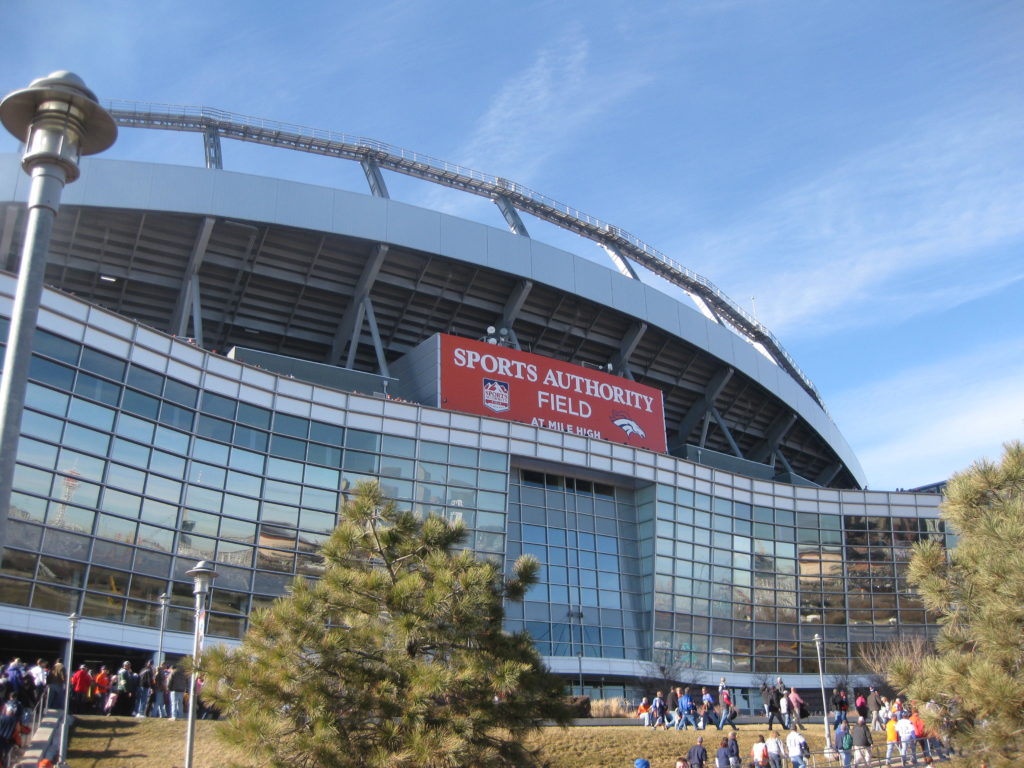 If there’s an overarching theme to this blog, it’s that love of sports makes folks do crazy things. Case in point: Why else, other than family or business obligations, would an otherwise reasonable group of people decide to leave Southern California for a weekend in mid-December and head to chilly Denver?

It has become one of my personal ambitions — for at least as long as the lack of the proper amount of disposable income prevents me from doing the see-an-entire-sports-league’s-stadiums-in-one-month type of trip that people like me romanticize — to travel somewhere at least once each fall to see an NFL game in a venue I haven’t yet been to. Entering the season, locales such as Pittsburgh, Chicago and Green Bay were very high on my list, but other factors came into play, such as when I’d have time to do it, who would be available to go with me, and which games on the NFL schedule seemed most appealing. So it came to pass that I identified the weekend before Christmas as the most ideal time to take a trip, and had settled on going to Chicago to see Bears-Seahawks, when my buddy MongerTron stepped in. I figured that he, a Bears fan through and through, would have no problem with going to Soldier Field (he’s been; I haven’t) but we were planning this trip right after Jay Cutler’s thumb injury had flushed his hopes down the toilet (turned out he couldn’t have been more right), and instead suggested we go to Denver for Broncos-Patriots. “I just want to see a good game,” he said.

In hindsight, that was pretty good foresight. We planned the excursion just as Tebow-mania was reaching its fever pitch, and by the week of the game, it was all anyone in sports could talk about. We bought our tickets on StubHub for just under $150 a piece and felt that it was pretty expensive, but then we heard a Patriots fan at the game lament that he had paid $500 for his upper deck seat and suddenly we didn’t feel so bad. Regardless, the considerable hype leading up to the game certainly made the prospect of sitting in cold, maybe even freezing temps for the game more palatable for myself, MongerTron and Mrs. Fan.

Sports or not, Denver is up there among my favorite towns to visit in the United States. Why? Centralized downtown with plenty to do and a great variety of places to eat and drink, very walkable, vibrant nightlife. The first item is the most important one to me, since it mitigates possibly the two biggest drawbacks of Denver, the lack of an extensive public transportation system and the fact the airport might as well be in Timbuktu. So other than taxi fare from and to the airport ($54 flat rate, FYI), we didn’t spend a dime on transportation during our three-day visit.

The other good thing about the trip from a budget standpoint was that we stayed at a prime downtown hotel for a very reasonable nightly rate (read: less than three digits before taxes). Either Denver hotels hadn’t caught onto the phenomenon I’ve often seen in other NFL cities of jacking up their rates on football weekends, or they just didn’t anticipate what the Tebow effect could do for their bottom line.

At any rate, our hotel had a fair number of Patriots fans milling about, and it was just a block away from 16th Street, the pedestrian mall that should be the starting point for any visitor’s trip to Denver. Not only are most of the bars, restaurants and anything else you might need during your stay on or near 16th Street, but there’s also a free shuttle bus service that travels up and down the street, with stops on each block, that you can take if you get lazy. This is important from a sports standpoint, because three of the city’s major sports venues — Sports Authority Field, Coors Field and the Pepsi Center — are on the west side of downtown and not excruciatingly far from 16th Street, so if you take the free bus to Blake Street or any point farther west, your walk to any of these venues is cut down significantly.

As it is, a glance at the map might suggest that Sports Authority Field in particular is a little too far to hoof it, but I can attest first-hand that it’s not that bad. Bring comfortable walking shoes and you might find the walk there from pretty much any point in the downtown area to actually be rather pleasant. If you’re still not convinced, there’s a light-rail line that drops you off close to the stadium, but if you ask me, the fare from downtown — two whole stops — is not worth it when the walk isn’t that bad.

As you might have gathered from the previous few paragraphs, if you aren’t planning to drive to the game, park and fire up a grill (and if you’re visiting and don’t know anyone around, I’m gonna guess the chances of you doing that are pretty slim), then staying in the downtown core is probably your best option for getting yourself fed and/or inebriated. Most of those bars and restaurants are on 16th Street itself, but anywhere you go within a few blocks, you’re bound to find something. In this case, we were seeking Sunday brunch, and Mrs. Fan knew of a place a couple blocks from 16th Street that not only had a killer brunch menu, but specials on Bloody Marys and mimosas as well. So we had a jolly time tracking the early NFL games and talking football until about an hour and a half before kickoff.

From there, getting to the game wasn’t too hard. It was pretty much a stroll through the rest of downtown, then once we crossed Speer Boulevard, it was a matter of navigating a maze of parking lots (both for the Pepsi Center and the nearby Elitch Gardens amusement park) and following the crowd until we got to the stadium, which was in sight the whole time. Easy-peezy. (By the way, if you’re interested in tailgating, the amount of parking available for Broncos fans appears to be staggering. Most of it is actually on the other side of Interstate 25 from the stadium, but it’s not like there aren’t ways to get across.)

As you can imagine, Broncos fans were pretty fired up for this game, since it was their chance to prove their Tebow-led team could stand up to the NFL’s big boys. So they were out in full force with their signs and their custom-made T-shirts (and the atmosphere made the presence of the Jesus freaks that hang out near every large-scale public event kinda ironic). They were countered by a huge number of Patriots fans, most of whom descended from downtown like us. And we all converged, it seemed, on the east side of the stadium about an hour before kickoff, creating a bottleneck of Beijing traffic-like proportions.

Seriously, though, it wasn’t that bad. Security procedures required that we all line up by gender and wait to be frisked and/or searched. And we got to the gate right at the busiest time, so we waited nearly half an hour to get to the front. Once through, it became a question of getting to the upper deck, which required either another interminable wait to get on the escalators or a 10-minute walk up the series of ramps. We chose the latter, and it was at the end of this journey that it hit us — they don’t call this place the Mile High City for nothing. You forget about the altitude and what it does to you until you do something strenuous, and it took us maybe five minutes once we reached the 500 level to catch our breaths.

(Oh yeah — if you’re reading this because you’re planning your own trip to see a Broncos game, take this to heart more than anything else you read here: If you have seats on the 500 level, take note of exactly which section you’re in and where that section is in relation to the stadium layout before you get there. Or you’ll end up like us, realizing that your section is clear on the other side from where you ascended and that the fact the stadium has an open end means you have to walk all the way around to get there. And then people around you will be wondering why you’re cussing up a storm when the game hasn’t even started yet.)

Speaking of altitude, even if you’re in ultramarathon-type shape, you’ll still become cognizant of it in other ways. For example, if you’re way up in the “nosebleed” seats and you just watch the aisle for a little bit, it’s pretty much inevitable that you’ll see folks struggling to get up the steps from time to time. And not just because they’re winded — sometime during the second half, we noticed a woman walk up to our row (Row 29, if you were wondering), stop, and then very nearly fall backward down the steps. “She did a Matrix thing,” MongerTron said. Within seconds she was met by two people wearing those yellow jackets you always see at stadiums, but instead of “Event Staff” on their backs, the jackets read “Alcohol Control.” Yes, they have folks there whose sole job is to keep watch over the drunks (lending credence to the claim that people get drunker faster in high altitude).

I don’t think any of the Broncos fans near us moved from kickoff to final gun, but that might have been because they knew the whole altitude situation. (There were plenty of ’em in short-sleeved shirts and/or shorts, so they were clearly acclimated. Meanwhile, we were wearing layers of sweaters and had to peel ’em off one by one as we realized it wasn’t even cold enough to justify bundling up.) Tempted by the sight of nachos, we went down at some point during the second quarter to buy nachos and wound up missing not one but two Broncos turnovers, and one Patriots touchdown. By the end of the game, the Patriots had thoroughly asserted their dominance, but the stands didn’t start clearing out until maybe the final two minutes. They were probably all still on an altitude high (and the Broncos were on track for the playoffs despite the loss, anyway).

[…] we were in Denver for a different reason (see this post to read all about it), and we also had good buddy MongerTron in tow. But he didn’t feel like […]