Pack your bags and see some hockey!

(This was written by Mrs. Fan and originally posted on Not Another Hockey Blog.) 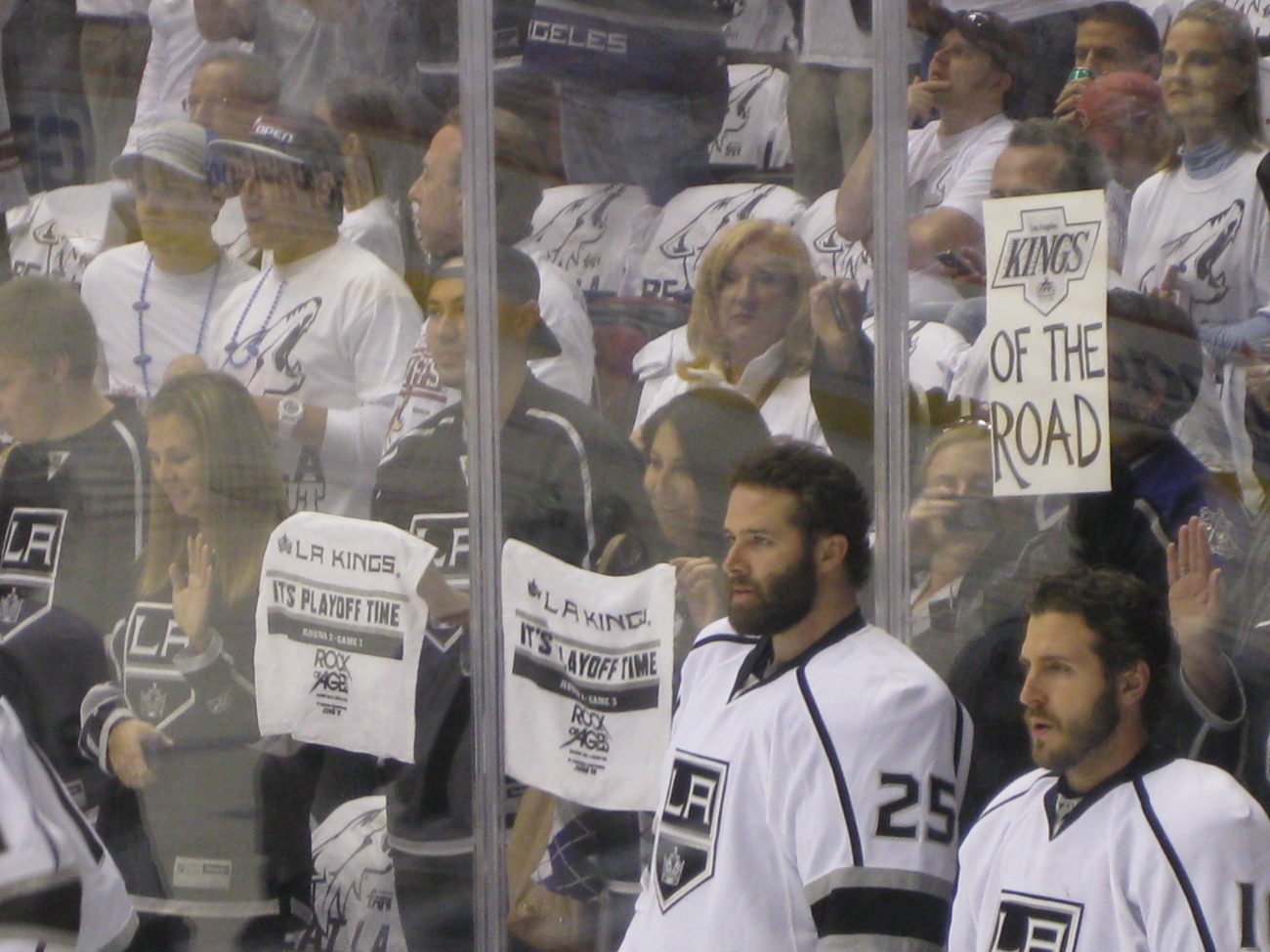 The 2012-2013 NHL schedule came out on Thursday, and in my household, it’s akin to Christmas. (Well, the unveiling of the NFL and USC Trojan football schedules are similarly huge events in our house.) Mr. Fan and I enjoy sports-related travel — as illustrated by this blog. We don’t plan vacations to Europe or weeklong stays on the beach in Hawaii — no, we analyze schedules and see if we can do things like go to Minneapolis and watch a Twins game one night, see USC play Minnesota the next day and then see some guy named Brett Favre hurl a football to top the weekend. (Sadly, it was too early in the year for a Wild game, otherwise we would have been all over that.)

The NHL has several city clusters that make trips like this possible without you needing to be a jet-setting millionaire. (Hey, I’m as middle class as they get … and I’m a religious saver.) So, if you want to follow around your favorite team, or you just love hockey, here are some ways you can maximize your travel (with some bonus flavor if you’re so inclined):

The joy of the northeastern United States is how close all the major cities are to each other. (Having formerly lived in Delaware, this is the one thing I really miss about the opposite coast.) Washington, Philadelphia, New York, Newark and Boston are all accessible via Amtrak, with no more than a couple of hours separating each city. Each city also has excellent public transit, which is important if you need to get around town and need to save money, since renting cars and flying in airplanes is more expensive than say, trains and walking.

Right off the bat, the first weekend of the NHL season offers some awesome travel possibilities between Philadelphia, Washington and NY/NJ (again, all approximately two hours away from each other via train):

Bonus flavor: If you happen to be an NFL fan as well — maybe you’re a Philly fan and you’re following the Flyers around, for instance — there are some football games you can easily get to on Sunday, October 14:

Non-Eastern Seaboard-related bonus flavor: If you happen to be in Nashville, there is a football/hockey double you can pull off: the Titans play the Pittsburgh Steelers on Thursday, October 11 (8:20 p.m. local time), and the Predators play the Blues on Saturday, Oct. 13 (8 p.m. local time). And hey, Nashville is pretty cool.

The Midwest has Minneapolis, Detroit, Chicago, Columbus and St. Louis. Most of these cities are separated by a five- or six-hour car ride (Chicago, for instance is about that distance to all the other points listed above except Minneapolis). If you’re willing to do a lot of driving — hey, road trips are fun! — you could conceivably drive, but you can also fly to all these cities if you really wanted to, since they’re all one-plus-hour flights. Southwest Airlines serves all five cities, and it’s what I happen to fly when I want to fly cheap.

If you want to see the defending Stanley Cup Champion Los Angeles Kings (man, it felt weird to type that), there’s a Midwestern swing for you in November:

Bonus flavor: Again, if you’re an NFL fan, the Chicago Bears host the Seahawks on Sunday, December 2nd at noon local time. (Sadly, neither the Bengals or Browns play on the 2nd, which would be easier to get to if you had to end your trip in Ohio.) If you started your trip in Chicago and got there the weekend before, the Bears host the Vikings on Sunday, November 25th at noon local time.

Toronto, Ottawa and Montreal are a nice cluster of cities, and really, seeing hockey in Canada is pretty danged cool. Montreal is my favorite city on the planet. Toronto is pretty cool. I’ve never been to Ottawa but I’m hoping to go (more on that later). Toronto and Ottawa are about a four- or five-hour car ride apart, while Ottawa and Montreal are a more manageable couple of hours apart. Via also serves all three cities by train (and I’m sure you can fly cheaply, though I’m not sure what the cheap Canadian airline equivalent is).

If you’d like to get your Canadian hockey on, here’s a possibility for you in late January/early February:

Bonus flavor: All three cities have various attractions in addition to hockey. But if you’ve never been to the Hockey Hall of Fame in Toronto, get thee there. My other favorite thing to do in Toronto is lay face down on the glass floor at the CN Tower and see the thousands of feet below. (Can you tell I’m not afraid of heights?)

OK, so maybe people come to California for 10,000 other reasons besides hockey. But hey, we have three NHL teams! We have two Stanley Cup Champions! (Your turn, San Jose.) And it’s relatively easy to see all three teams when the schedule allows. Los Angeles and Anaheim are about a 45-minute drive (without traffic … oh, wait, that’s not possible … it’s more like two hours with lots of traffic), and San Jose is either a six-hour drive (if you take the boring route) or a one-hour flight.

So if you’re thinking spring and want some California flavor, here’s a trip you can do:

Bonus flavor: If you’ve never been to California, and are willing to make really long drives, do yourself a favor and take the 101 (either going north or south). It’s the more scenic route. It may take you anywhere from 8 to 10 hours to get from San Jose to Los Angeles, depending on how many stops you make, but you also get to go through San Luis Obispo and Santa Barbara. The Central Coast of California is highly underrated and really beautiful.

If you really have a lot of time to spare and are not afraid of tiny, curving roads or cliffside driving, take State Route 1 (aka Pacific Coast Highway) all the way down the coast. It can take you anywhere between 10 to 12 hours, but it’s worth it. Monterey, Big Sur and Malibu are all along this route, and the cliffside vistas are amazing. A writer friend of ours from Philadelphia did this drive while he was covering baseball in California — he was able to do it over All-Star Break a couple of years ago, and he went from San Francisco to Anaheim — and he said it was the coolest thing he’s ever done.

More bonus flavor (sports-style): If you’re into baseball, Spring Training starts up around this time, and Phoenix, the hub of the Cactus League, is a mere five-hour drive from Los Angeles.

Once the NHL schedule was released, Mr. Fan and I pored over it and came up with an actual itinerary that we’re going to attempt this December. As I mentioned before, we’re not uber rich, and part of this itinerary is only possible because I have a crapload of frequent flyer miles and can fly free to Pittsburgh, and we have free lodging in Toronto (thanks, family). But this ultimate itinerary (if we can pull it off) fulfills a couple of desires for me: 1) Seeing the Steelers in Pittsburgh (I am a Steelers fan and I have never seen them play at home); and 2) watching hockey in Canada.

So here is this epic trip:

And then we go home on Sunday. The Buffalo Bills were actually playing at home that Sunday (we plan to drive back to Pittsburgh via Buffalo from Ottawa), but we decided we actually needed to go home at some point, and well, NFL games are expensive. Oh well.

Now they’ve gone and done it « The Itinerant Fan

[…] Fan and I had an epic sports itinerary planned for December that revolved a lot around seeing the NHL in Canada. We’re still taking […]

In search of randomness – The Itinerant Fan

[…] our so-far-woeful list of Itineraries in those two leagues. Eventually Mrs. Fan and I settled on an Eastern Canada swing in December that would’ve notched four different arenas on our belt. And then the NHL decided […]