Mention soccer to most people in the United States and you’re likely to either be torn to shreds (ask ESPN about that whenever it airs a soccer game) or find a small, but enthusiastic following that appreciates “The Beautiful Game.” Count me in as the latter. I have no problem with soccer. I’m a former soccer player. I enjoy the game. Sure, it might look like there’s not a ton going on and maybe they’re scoring every vernal equinox and maybe there’s a little too much flopping, but it’s still a wonderful game. And as with hockey, television just doesn’t do soccer justice. You don’t realize just how expansive the field is, or how far these guys can kick the crap out of a soccer ball, or just how fast these guys are.

So, when Jazzy Girl, a friend from Sacramento, floated the idea of seeing a real live Major League Soccer game in L.A. to me, I was in. And why not? It was a) a chance to see David Beckham and Landon Donovan in person; and b) it was at a venue I’d always wanted to go to but never had to that point; and c) I’d never been to an MLS game. Jazzy Girl got herself a deal on LivingSocial, and she took myself and her friend Amber Waves to the Home Depot Center on a beautiful summer night to watch some grown men kick a tiny little ball around. 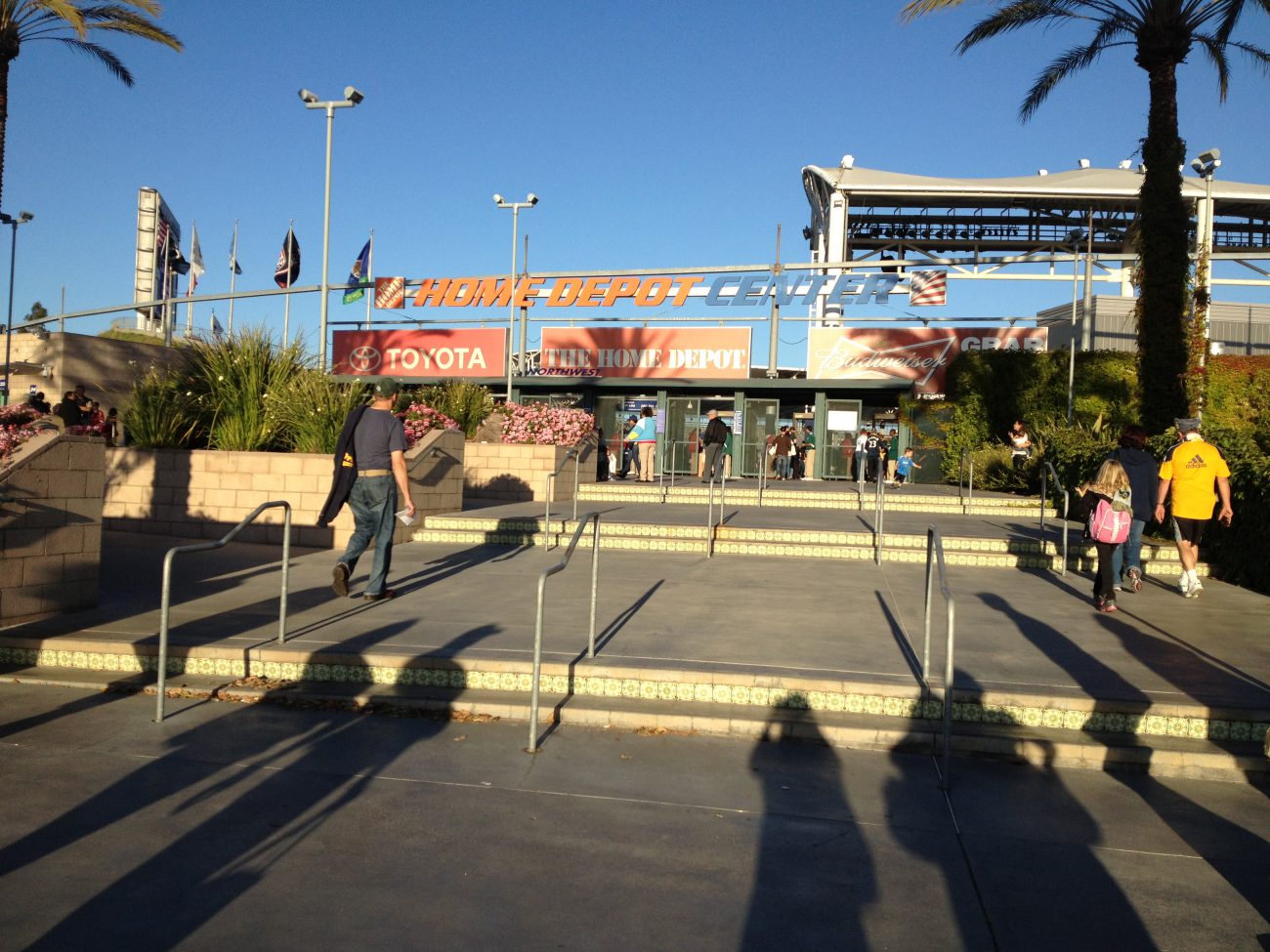 Home Depot Center is located in Carson — that’s south L.A.-ish for the uninitiated — next to the Cal State Dominguez Hills campus. It sits on the site of the old Olympic Velodrome, which was used for the 1984 Olympics. It’s admittedly kind of a weird place to put a stadium, but I guess if you’re not using a velodrome and need some land for a soccer-only facility, it’s probably the only piece of really large real estate you could put a stadium on without, oh, I don’t know, having to rip up half of downtown Los Angeles. It’s still near the freeway (the 110 is right there) and fairly accessible.

However, there really isn’t much to do around said stadium, save for some strip malls and fast food joints, so I suggested that Jazzy Girl and Amber Waves meet me for dinner in the nearby city of Gardena. You could obviously hit up one of the beach cities — Manhattan, Redondo, Hermosa and Long Beach(es) aren’t that far and can be accessed via the nearby 405 freeway. But I’m kinda cheap and I really wanted fancy ramen, so I suggested Mottainai Ramen in Gardena. (If you’re unfamiliar with Gardena, do know that it has a large Japanese population, and if you love Japanese food that’s not only delicious, but super cheap, well, Gardena is where it’s at.)

We filled up on ramen and curry — my dinner choice was enthusiastically received, with Amber Waves stating she’d definitely be back — and then headed out for a night of soccer. It took about 15 minutes for us to get to the restaurant to Home Depot Center and we didn’t have to hit the freeway at all. 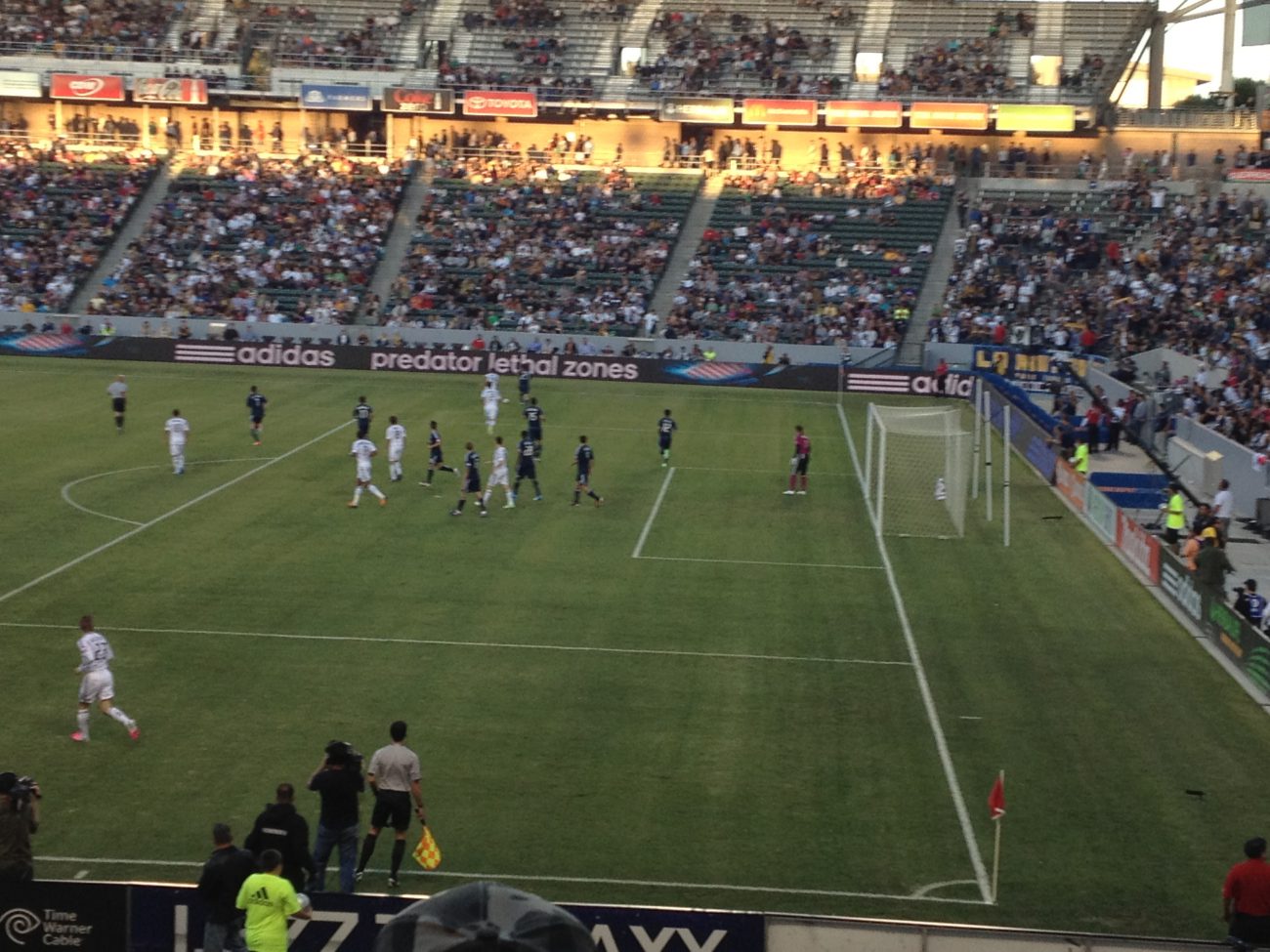 We arrived about half an hour before game time. You can’t actually see the stadium from the road, but you know you’re getting there when you suddenly see a ton of cars trying to make a left turn into a gated parking lot. Parking was relatively easy, but then our ticket adventure began.

Jazzy Girl had taken advantage of a LivingSocial deal to buy our tickets: She got reserved section seats for $55 apiece (they are normally $70). It was fairly obvious that a lot of people had taken advantage of LivingSocial deals of varying levels to watch the Galaxy take on the Vancouver Whitecaps, judging from how many printed tickets people were holding. However, Jazzy Girl was unable to print all three of our tickets, and she had problems pulling them up on her phone. We were directed to four different people and wound up having to walk to a gate on the other side of the stadium to find a tiny will call tent and get our tickets. After that, though, it was smooth sailing. Our section was right in front of the gate we entered, and since we ate before we got to the stadium, we settled immediately into our seats — which were quite good and parallel to one of the goals — and waited for the game to start. 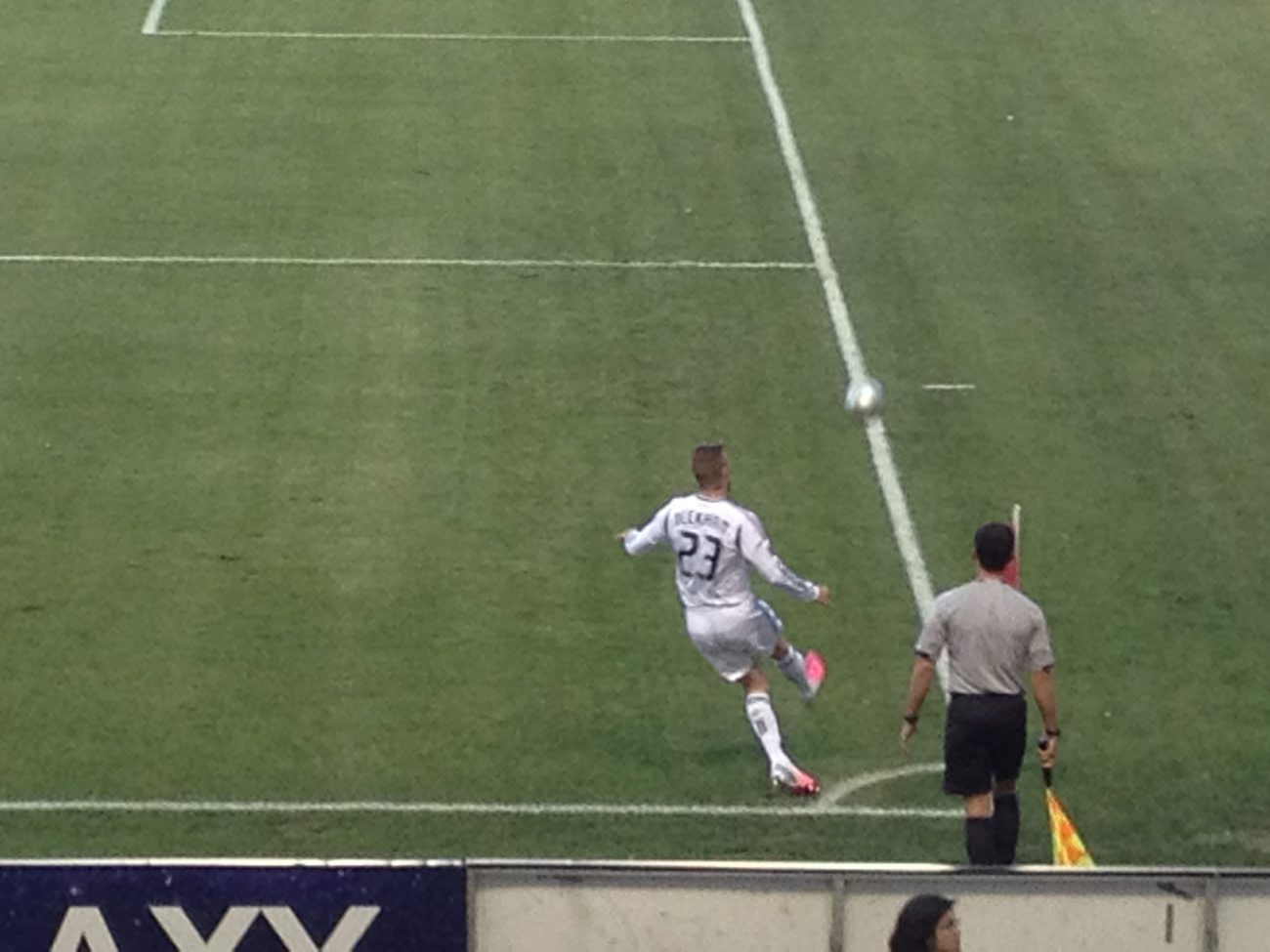 If you watch any soccer on TV, especially that of the international variety, you know that soccer fans can be passionate and colorful. L.A. Galaxy fans are no exception. There are various booster groups seated around the stadium, most notably the Angel City Brigade, which was seated behind the goal on the opposite side of the stadium from us. Those folks stood the whole game, chanted, waved flags, jumped and danced in unison and had a generally good time. The chanting, drum beating and flag-waving is my favorite part of any soccer game, and it’s neat to see these folks bring that kind of flavor.

A neat thing is that the Galaxy’s PA guy only announced first names for the Galaxy players. He’d say someone’s first name, say, David, and the crowd would respond by yelling the last name (Beckham). And whenever someone from the Galaxy scored — they got three goals in the first half — or was subbed out, he would say the player’s first name, wait for the crowd to respond, repeat it two more times (with the crowd responding) and then say “Thank you” at the end. I’ve never heard anyone do this before, and it’s pretty cool. Of course, if you don’t know all the players and their last names like we did, you feel a little lame and left out, but oh well.

The other thing that struck me about Home Depot Center was how cozy it was. It has two levels, but the upper deck is only on one side of the stadium. Otherwise, most people are sitting in the lower bowl. Sightlines are great all around. The bonus for us in the first half is that the Galaxy was attacking on our side of the field, so we saw all three goals in the game (including a penalty kick by Landon Donovan). David Beckham also had to take two corner kicks right in front of our section, and it was funny to see everyone whip out their phone cameras immediately to take pictures of him.

The crowd went home happy since the Galaxy won, especially the chanting folks, and a good time was had by our group. Getting out was a snap since the concourses are really wide. (Well, the fact that some people left early since the Galaxy had such a big lead probably helped.) But things were so loose in the concourses that I was able to make my way to the other side of the stadium quickly after the game and meet up with my friend Curling King, who happened to see via Twitter that I was at the game and let me know where to find him afterward.

We even got coupons for free Pollo Campero chicken on the way out. Not a bad topper to a fun night.

For more on Los Angeles/Anaheim venues and things to do, check out our L.A. city guide.