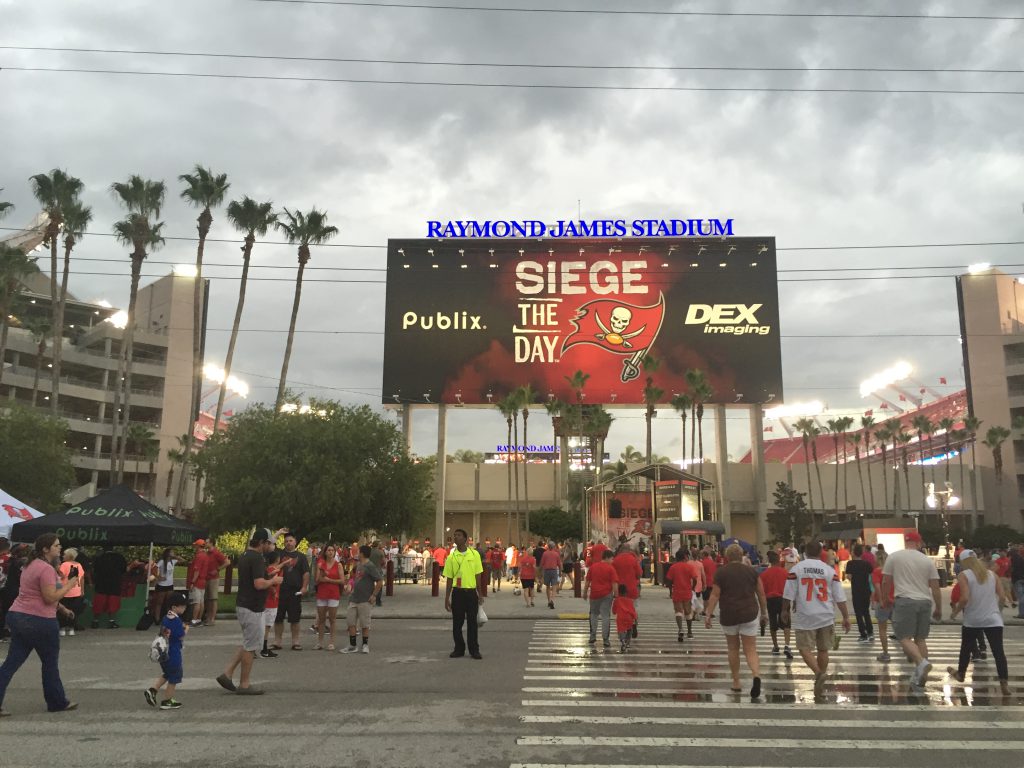 So your team is headed to the College Football Playoff? With the semifinal and final sites spread across the country, it’s time to get a head start on your travel plans.

Fear not, because we’re here to help. We’ve gathered a handy collection of resources to help you get started — just don’t forget to bring your lucky jersey.

(Note: We’ll be updating this post with times, teams involved and more information as it becomes available.)

The two semifinal games will take place on Saturday, Dec. 31:

• (3) Ohio State vs. (2) Clemson in the Playstation Fiesta Bowl, 6 p.m. MT at University of Phoenix Stadium in Glendale, Ariz.

The national championship game will take place on Monday, Jan. 9 at Raymond James Stadium in Tampa.

For detailed city information for the semifinal and final sites, check out our City Guides to Atlanta, Phoenix and Tampa.

Glendale
Phoenix Sky Harbor International Airport (PHX) is about five miles to the east of downtown Phoenix and about 20 miles southeast of Glendale. It’s a hub for American Airlines.

Tampa
Tampa International Airport (TPA) is less than 10 miles northwest of downtown Tampa and adjacent to Raymond James Stadium; many “airport” hotels are within walking or a short driving distance to the stadium.

Atlanta
The Georgia Dome is located just west of downtown Atlanta, part of a complex that includes major attractions such as the Georgia World Congress Center, Philips Arena and CNN Center. Centennial Olympic Park, which commemorates Atlanta’s role as host of the 1996 Summer Olympics, is also nearby. Most downtown hotels are within walking distance of the Georgia Dome.

Glendale
University of Phoenix Stadium is in the Phoenix suburb of Glendale and about 15 miles from downtown Phoenix via Interstate 10 and Loop 101. Fans will find it most beneficial to have a car during their visit, as public transportation between Phoenix and Glendale consists only of indirect bus lines. Some Fiesta Bowl events will take place in downtown Phoenix (see below) and many of the area’s attractions are in the Valley’s eastern suburbs such as Tempe and Scottsdale.

Tampa
Raymond James Stadium sits a few miles northwest of downtown Tampa and close to the airport. Interstate 295, which connects Tampa and St. Petersburg, runs nearby, and Dale Mabry Highway, the north-south road along which the stadium is located, is one of the city’s busiest thoroughfares.

Atlanta
The city’s MARTA subway system runs through downtown Atlanta and has a line leading to Hartsfield-Jackson International Airport. Use the Dome/GWCC/Philips/CNN stop to access the Georgia Dome.

Glendale
While the Phoenix area has a light rail system operated by Valley Metro, it doesn’t extend as far west as Glendale. The best way to get to University of Phoenix Stadium is via car. There are designated taxi and rideshare drop-off and pickup points near the stadium and the adjacent Westgate entertainment district.

Tampa
Other than the streetcar service that runs between downtown Tampa and the historic Ybor City district, local public transit consists only of bus routes. So driving to Raymond James Stadium remains the best option. The stadium operates a taxi stand along Dale Mabry Highway; rideshare drop-off and pick-up takes place at Steinbrenner Field, across the street from the stadium. More taxi/rideshare info can be found here.

Atlanta
Parking is available throughout the Georgia Dome/Georgia World Congress Center site. Click here for a parking map. Permits can be purchased in advance as part of a bundle with Peach Bowl FanFest tickets for $75 by going to this link.

Glendale
Advance purchase parking for the Fiesta Bowl can be purchased through this link, with prices starting at $30. Parking is also available at the Westgate complex for $20.

Tampa
Parking passes at Raymond James Stadium are being sold in advance for $50 each; click here to purchase. You can also find a parking map, RV information and more here.

Atlanta
The College Football Hall of Fame, within close proximity of the Georgia Dome and convenient to most downtown hotels, is offering discounted admission from Dec. 29 to Jan. 1 as Peach Bowl fans come to the city. On game day itself, there will be a fanfest outside the Georgia Dome for four hours prior to kickoff.

• The NBA’s Hawks are home both Dec. 30 (vs. Detroit) and Jan. 1 (vs. San Antonio). Catch their games at Philips Arena, down the street from the Georgia Dome.
• Speaking of the Georgia Dome, it will be converting quickly to host the NFL Falcons’ regular-season finale on Jan. 1 at 1 p.m. ET, against the NFC South rival New Orleans Saints. Incidentally, it will be the Falcons’ final regular-season game there, as they are set to move into the new Mercedes-Benz Stadium (rising next door) for the 2017 season.
• Georgia Tech’s men’s basketball team will be in action on the 31st, hosting North Carolina in an ACC tilt. The Yellow Jackets play their home games at McCamish Pavilion on the GT campus, a few miles north of the Georgia Dome in midtown Atlanta.

Glendale
The Fiesta Bowl’s pregame festivities begin in the morning on Dec. 31 with a parade through downtown Phoenix, which is free for spectators. The Fiesta Bowl FanFest takes place on the “Great Lawn” outside University of Phoenix Stadium, and is free to ticket holders.

• If you arrive early enough, you can catch another bowl game. The Cactus Bowl will take place Dec. 27 in downtown Phoenix at the home of the Diamondbacks, Chase Field.
• The NHL’s Arizona Coyotes play their final home game of 2016 on Dec. 29 against the New York Rangers (after that, they don’t return home until Jan. 7). They play across the street from University of Phoenix Stadium at Gila River Arena, part of the Westgate entertainment complex.
• The NBA’s Suns, who play at Talking Stick Resort Arena in downtown Phoenix, also play a home game Dec. 29 vs. Toronto, and return home Jan. 3 to face Miami.

Tampa
Among the many events surrounding the championship game are: Playoff Fan Central, a fan festival taking place at the Tampa Convention Center Jan. 7-9 (general admission cost is $8; tickets can be purchased here); Media Day, featuring press conferences with players and coaches of the participating teams, at Amalie Arena on the morning of Jan. 7 (admission is free); and Championship Tailgate, the pregame festival outside Raymond James Stadium on gameday (free to ticket holders).

With Amalie Arena in use for CFP events, the NHL’s Lightning will be on the road throughout the weekend. They return home Jan. 12 to take on Buffalo.