With six weeks to go before we head across the Atlantic for a 10-day vacation in the United Kingdom, Mrs. Fan and I have made set our sports-themed plans. That, of course, means buying English soccer tickets. We will be seeing two matches:

OK, my initial goal was to catch three matches, but that was before I learned about the challenges that come with planning a football trip to England. After waiting for the Premier League to set its schedule for March, and after waiting for the Champions League quarterfinal bracket to be set and dates confirmed, I still had to decide which matches to attend.

From there, I had to make the decision on whether I wanted to buy a membership for the clubs whose games I wanted to attend, in order to increase my chances of acquiring tickets. Let me tell you, the memberships add a whole new layer of commitment — and trepidation — to your trip planning and to the process of buying English soccer tickets in general.

Once you put down the money for a membership, you feel like you have to get match tickets in order for your purchase to be worth it, but the thing is, obtaining a membership is far from a guarantee that you’re going to get the tickets you want. At least it improves your odds, though.

And then it compels you to do things like wake up at 2 a.m. so that you can hop on your computer and buy tickets (if you’re in England the sales begin at 10 a.m. local time like they usually do in the States). I did that to get tickets for both of the matches mentioned above, and while the Manchester City purchase was easy-peasy (as in, plenty of availability), the Spurs match turned out to be trickier.

The match against West Ham was actually not my first choice; my eye was on Tottenham’s home game against Manchester United on Sunday, March 15. But with United being one of the marquee clubs in all of Europe, demand was understandably high. When I got into the ticket-buying portal, my-quick-as-possible scan of the seating sections revealed exactly ONE pair of seats together, and when I tried to select them I was summarily rejected, the system telling me that the seats were already in another customer’s cart.

Luckily, I had the West Ham match as my Plan B — and it was a big reason why I wasn’t as hesitant about buying a membership for Tottenham (and by the way, I had to buy TWO memberships for Spurs for the privilege of buying two tickets, as opposed to just one for City). Tickets were much more readily available for that match, which went on sale to members at my level at the same time as the United game, and so I pounced. 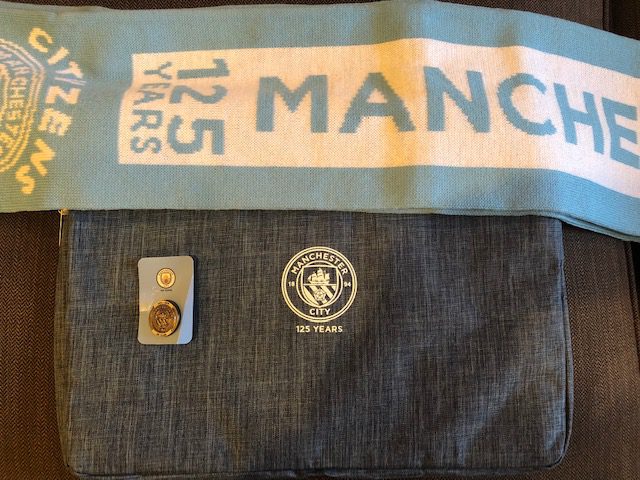 Even when taking into account the “added” cost of buying memberships, I don’t consider the cost of buying English soccer tickets any more exorbitant than attending, say, a marquee NFL game. Here’s the damage incurred (converted to US dollars):

So if you break it down based on the fact that we incurred these costs simply to attend one game, it works out to about $95 a person for City and about $135 for Spurs. Not cheap, but not out of line with most major sporting events.

Besides, there’s a side benefit to it. In both cases, I get fancy membership packs that include souvenirs. I just received City’s in the mail last week (see photo above), which includes a snazzy computer/tablet case, a scarf (of course, the souvenir to have if you’re a fan of any European soccer club), a pin and more.

No, I’m not a fan of either team — I just wanted to see games, and it turns out those were the teams I’m able to see during my trip. But hey, maybe the free stuff will sway me. At any rate, I’m really looking forward to doing my thing and checking out the clubs and stadiums. As for the other clubs that I had hoped to see but couldn’t — Liverpool, Chelsea, Arsenal and so on — there’s always the stadium tour, which I may or may not take advantage of. Nothing left to do now but make that trip across the pond.