Our guide to RingCentral Coliseum in Oakland includes information on events, tickets, parking, public transportation, nearby hotels and restaurants, seating and more. Read on to find out how to get the most out of your gameday experience.

RingCentral Coliseum is still the home of the Oakland Athletics and select other events. But doesn’t have many nice things said or written about it these days.

So why trek to Oakland and see an event at RingCentral Coliseum? Well, it’s easily accessible, for one thing. Whether it’s baseball or football, you’ll meet some of the most passionate and knowledgeable fans sports has to offer, even if recent hard times have left them a little jaded. And hey, look hard enough and you’ll see that it has a few charms, too.

Look at it on a map and you might think to yourself that RingCentral Coliseum isn’t a hard place to get to, and you wouldn’t be wrong. The stadium sits on a plot of land officially known as the Oakland-Alameda County Coliseum Complex, which also includes Oracle Arena (which itself was once known as the Oakland Coliseum Arena — confusing, huh?), and the two venues lie alongside Interstate 880, the major freeway that runs through Oakland and leads to the Bay Bridge crossing into San Francisco.

So driving is pretty direct — take 880 to Hegenberger Road — though traffic in that area around the time fans would be trying to get to games is always a crapshoot, so be sure to allot extra time for yourself for driving and parking at an RingCentral Coliseum event.

If you’re coming straight from the Oakland Airport, about a mile away, you can get to RingCentral Coliseum for free, technically. Use the BART train from the airport to the station — you just need a fare ticket to get through the turnstiles, but you won’t be charged unless you depart the system somewhere besides the Coliseum station.

Event parking in the RingCentral Coliseum lots costs $30; follow the link to purchase parking in advance. There are also a few lots in the area managed by third-party companies where you might be able to drive up and find a spot.

A’s fans don’t usually come to RingCentral Coliseum in droves, but they sure know how to party — Oakland is one of very few places in Major League Baseball in which you’ll find tailgating before events on a regular basis in the parking lot.

The A’s have done their best to increase the options for fans outside RingCentral Coliseum. The plaza between the stadium and arena has been rebranded Championship Plaza and serves as a pregame meeting point. Fans will be able to find food trucks and live entertainment here.

Note that if you’re coming from the BART station, you’ll have to walk all the way over the pedestrian bridge, which spans over the vast parking lot, and then around RingCentral Coliseum to the other side to reach Championship Plaza. 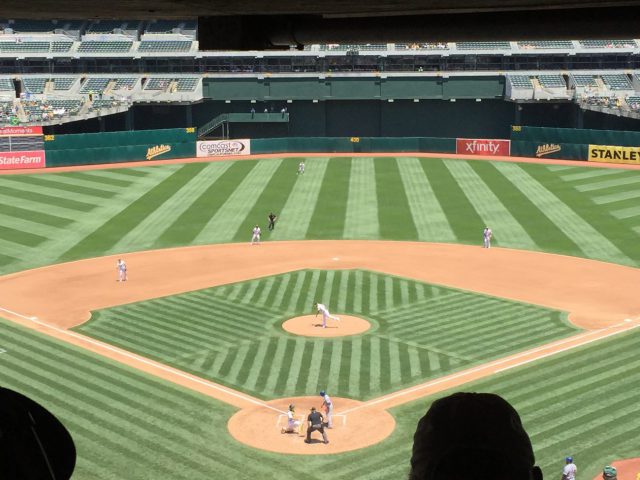 Watching a game at RingCentral Coliseum

RingCentral Coliseum tries to be a football stadium and tries to be a baseball stadium, yet compared to its peers is ill-fitted for both (which, frankly, was the case with most multipurpose stadiums built in the same era).

Famously, RingCentral Coliseum’s round shape creates the most foul territory of any venue in the majors, so don’t be surprised if you feel farther removed from the action than at most ballparks.

Food and drink at RingCentral Coliseum 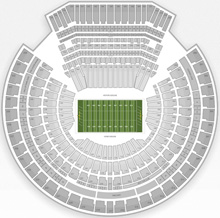