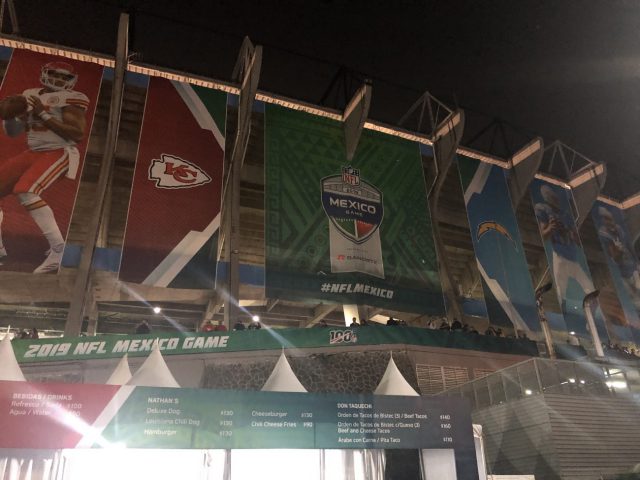 Whether you like it or not, the NFL’s International Series is here to stay. And while the games in London tend to draw the most attention, the fact that one game is held annually in Mexico City — the NFL Mexico game — cannot be overlooked, by stationary or by traveling fans alike.

Though it’s more of a mystery than London to many American travelers, there’s still quite an allure to traveling to Mexico City. First off, it’s a shorter flight — no hopping across the pond.

The city itself offers quite a lot, from terrific food to stunning architecture to a rich history. For the adventurous, there’s the fact that you’re mostly speaking and reading a different language.

And the stadium in which the game is held each year, Estadio Azteca, has quite a bit of history in its own right.

So what’s it like attending an American sporting event south of the border? I had been curious to find out for a few years now, and I finally decided the time was right to make the trip.

Over a long weekend, myself, Mrs. Fan and brother-in-law Stargazer took in the NFL Mexico game between the Chargers and Chiefs, and as much of Mexico City as we could, and found out a couple things: Not only is CDMX a worthy travel destination for anyone, sports fan or not, but also Mexicans sure do love their futbolamericano. 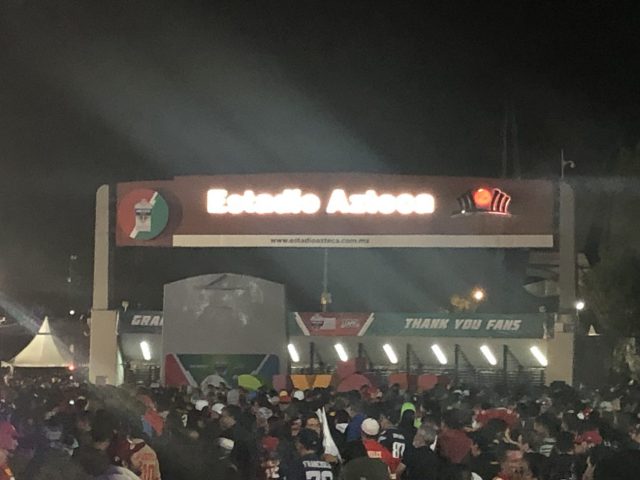 Getting to the NFL Mexico Game

As you would expect from one of the largest cities in the world, Mexico City is massive and sprawled out, and even as a tourist you can find yourself staying in one of many districts around town.

It’s a safe bet, though, that you won’t be that close to Estadio Azteca, the site of the NFL Mexico game, which is some 15 miles south of the city center and surrounded mostly by residential neighborhoods.

So it stands to reason that wherever you’re staying, it’ll take quite a bit of effort to get to the game. Unless you decide to rent a car and brave Mexico City’s daunting traffic, you have one of two transportation options.

The first, of course, is public transit, which in the case of a trip to Estadio Azteca requires using two services: the Mexico City Metro subway, and the Xochimilco Light Rail (Tren Ligero) line, which extends beyond the subway’s reach and leads to the stadium. If you go this route, you just have to be sure to make your way to the No. 2 or Blue (Azul) line toward the Tasqueña station, at which you can transfer to light rail.

For their annual game, the NFL does provide an alternative in the form of shuttle buses that depart from four prominent locales around Mexico City. The closest departure point to the city center is the Auditorio Nacional, located along the Paseo de la Reforma.

So, which one of these methods did we choose? After quite a bit of deliberation, and knowing we’d have to deal with fierce crowds no matter which way we went, we chose to ride the shuttle buses, which cost MX$100 (100 pesos — the equivalent of about $5 USD) each for round-trip tickets.

We took a short Uber ride from our hotel near the Angel of Independence to the Auditorio at 4:30 p.m., about 2 1/2 hours before kickoff, and were immediately confronted with two lines — one stretching across the entire front steps of the auditorium, and another about half as long. After a bit of inquiry with the Spanish-speaking party at the end of the shorter line, we figured out that the longer line was meant for people who wished to sit on the bus, and the shorter for people who were OK with standing.

So, of course, we chose the shorter line and managed to board a bus after about a 45-minute wait. And that’s when the adventure really began.

Our bus ran into a massive traffic snarl about two miles from the stadium; while still on the highway, apparently a number of fans demanded (in Spanish) that the driver pull over so that they could get out and walk, and the driver COMPLIED! The sight of about 40 people, mostly in football jerseys, streaming across traffic lanes of a nearby frontage road was something to behold.

We, however, remained on the bus for another 20 minutes until it got onto the road leading to the stadium, where he finally let the remaining passengers out. From there, we walked about half a mile onto the stadium grounds.

One final logistical note: It pays to know which side of the stadium, east or west, is which, and it matters depending on which method of transportation you use. The Estadio Azteca light rail stop is on the stadium’s east side; the shuttle drop-off and pick-up points are set up in the parking lot on the west side. 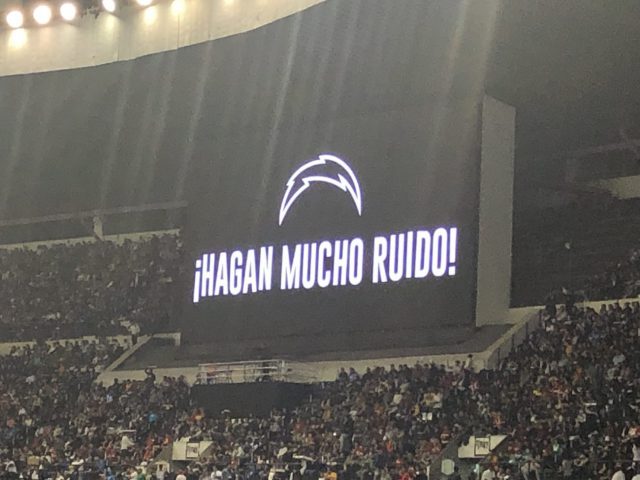 Things to do before the NFL Mexico Game

Because of the traffic and troubles we experienced in getting to the stadium, we didn’t get to sample all there was to offer as far as pregame entertainment.

But we can attest that the NFL does go all out in terms of providing fans with things to do — which is all the more reason why fans should strive to get to the stadium as early as possible.

For the 2019 NFL Mexico game, the “Fan Fiesta” opened at 2:30 pm for a 7:15 pm kickoff (the game is typically held on a Monday night in November) and consisted of activities all around the venue, primarily on the east and west sides — after the entry turnstiles.

These activities include: A concert stage, the ESPN pregame set, a “Madden” video game booth, a photo op booth with the Vince Lombardi Trophy, merchandise stands and food trucks.

If you’ve come to the game hungry, you’re best served buying from one of the trucks or booths set up in the plazas (if you don’t know Spanish, most of the menu boards have English on them as well).

Once you get into the stadium structure, there isn’t much in the way of concessions and, in fact, your best bet once you’ve gone in is to wait until you get to your seat — more on that below. 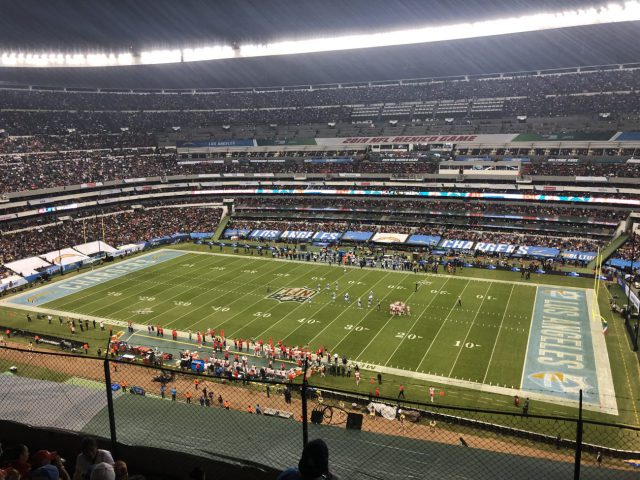 Estadio Azteca is a huge, sprawling structure that seats more than 85,000 — fitting, since it hosts games for Club America, one of the most popular soccer clubs in Mexico, as well as El Tri (the Mexican national soccer team).

That said, it is an older stadium, opened in 1966, and it has a few quirks. If you find it strange that players enter the field by walking down on ramps that cut through the lower seating bowl, that should give you an indication of what it’s like for spectators navigating the concourses as well.

Since it’s a soccer stadium first, you’ll have to keep a few things in mind while selecting where to sit for the NFL game. For one, some of the rows closest to the field will be cordoned off since they would be so low that you wouldn’t be able to see over the players and field personnel on the sidelines.

If you’re looking for cheap seats, beware of sitting too close to the large videoboards positioned at each end in the upper deck, as there are a few rows of seating behind them that would provide obstructed views.

For our part, we scored tickets in Row 4 on the 400 level (the levels go up to 600). We expected a pretty good view of the game and got it — except for one problem: a chain-link fence right in our line of vision. Apparently the fence is in place to keep fans in the 400s from throwing things onto the level directly below (a legitimate concern), but there was no warning of this when we purchased tickets, or on the tickets themselves, which I have to admit was disappointing.

Of course, if you’re an NFL fan you have to stop for a moment or two and enjoy the fact that you’re watching a familiar game in a foreign environment, with PA announcements and signage in Spanish.

If you haven’t been brushing up on your Spanish during your time spent in Mexico City, you can do it while seeing videos on the board signifying things like primera oportunidad (first down), el gol campo es bueno (the field goal is good) and hagan mucho ruido (make a lot of noise).

Oh, and fair warning if you’re sensitive to this sort of thing: Smoking, apparently, is permitted in the stands, and a few folks in our section took advantage of it over the course of the game.

As mentioned above, with not that many places to pick up food in the concourses, you’re best served staying in your seat and waiting for the many, many food vendors to come by and hawk their wares. Among the items we observed being sold: beer (cerveza just might be the most common Spanish word you hear while in the stands), churros, donuts, candies and bags of chips with hot sauce added to order.

One item, though, intrigued me far more than the others: Instant ramen noodles — yes, in the styrofoam cup, with your choice of flavor and with hot sauce and lime added. For MX$60 (about US$3), the price was right, and dare I say it hit the spot.

If you came to the game via public transit, be prepared for another logistical nightmare afterward, whether it’s trying to board the light rail or getting on a shuttle back to your park-and-ride departure point.

The Auditorio Nacional shuttle was by far the most popular, with the line to board snaking throughout the parking lot, and we weren’t able to board a bus until more than two hours after the game had ended. So either leave the game a little early, or be prepared to exercise a whole lot of patience. But hey, you’re on vacation, right?

This much we know — we wouldn’t hesitate to attend another NFL Mexico game in the future.

Checking out sports around the world: An occasion for each country | Itinerant Fan

[…] blog has already chronicled some of those international opportunities, such as the NFL in Mexico City, Premier League soccer in England and even a Winter Olympics. But let’s face it, those are […]