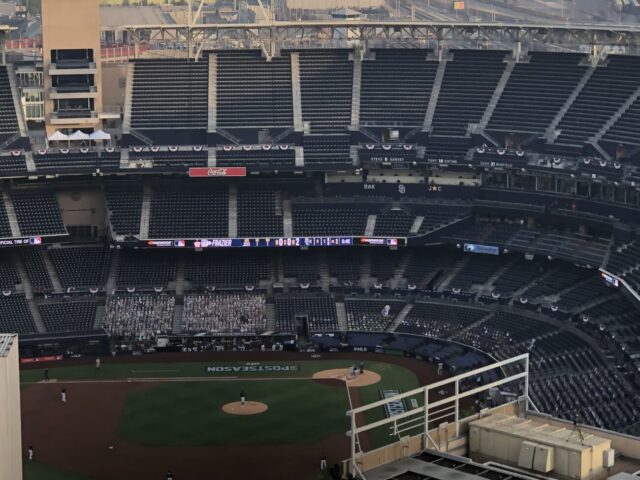 When the COVID-19 pandemic hit in March and shut down sports, the Major League Baseball season was only in spring training. I had watched at least one live MLB game every season dating back to college (more than 20 years), and I figured from the beginning that 2020 would be the year that streak bit the dust.

But, around the time that MLB announced plans for a 60-game regular season, I got to thinking.

The nature of ballpark design means that a number of them around the majors are located in urban areas, and some have nearby buildings and structures that overlook the field. So the opportunities to catch a glimpse of live ball were there for anyone willing to get creative, and I covered this in a blog post back in June.

I was hoping to follow one of my own suggestions at some point, but the 60-game season came and went quickly, and again, it appeared I was out of luck.

Then, a lifeline: MLB announced a bubble format for its postseason, in which four stadiums would be used as neutral sites starting with the Division Series. Three of the parks — Globe Life Field in Arlington, Texas, Minute Maid Park in Houston and Dodger Stadium in Los Angeles — offered no chances for viewing from outside.

MLB has announced that following the Division Series, games being played at Globe Life Field will be open to fans to watch live in a limited capacity. You can get tickets to both the NLCS and World Series via StubHub, but I don’t live in Texas.

That left one option: Petco Park in San Diego.

I have a soft spot for Petco, as I think it’s one of the most underrated parks in baseball. I have seen an All-Star Game there and I absolutely love the surrounding area of downtown San Diego, which includes the Gaslamp Quarter, the San Diego Convention Center and some great bars and restaurants. And it’s just a two-hour drive from my home in the Los Angeles area.

So with the postseason in full swing, I quickly realized that if I wanted a shot to see a live MLB game in 2020, I needed to head down to San Diego pronto. 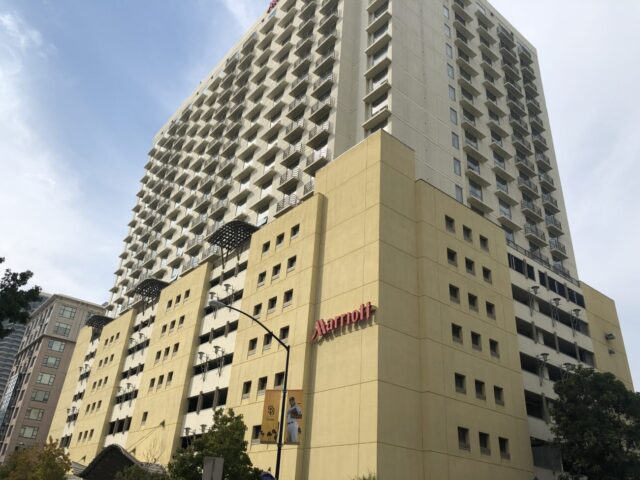 Petco Park has a veritable skyline of buildings around it, many of which offer pretty nice views into the stadium from high-rise perches. But nearly all of them are private, high-end condos, and while a few of the residents there have publicly offered to let folks into their homes to watch games from the balcony, it wasn’t an altogether practical option for me.

Of the handful of nearby hotels, one in particular presented a strong opportunity: The San Diego Marriott Gaslamp Quarter hotel, located caddy-corner from the Western Metal Supply Company building that comprises Petco’s left-field structure. The hotel is 22 stories high, has a rooftop lounge and offers a reasonable view into the ballpark.

The hotel is well aware of the baseball-fan amenities it offers. The rooftop bar, called the Altitude Sky Lounge, is popular with MLB fans during regular Padres gamedays, who might not care to watch the games live but enjoy the party atmosphere. And a few rooms and suites also allow patrons to peek into the ballpark.

As a longtime Marriott rewards member, I thought I’d have an advantage in securing a private room with a ballpark view. But when I went about booking — first by calling Marriott reservations, then by calling the hotel directly, and finally by checking Marriott’s website — I discovered the only way to guarantee a private ballpark view was to reserve one of the two presidential suites, which for me was a non-starter.

The hotel also offered a special baseball package that included reserved seats at the Altitude Sky Lounge and a $150 food and drink credit. I could see how that would be plenty appealing to a party of four, but I was going to be by myself, so the difference in room rate — $350, compared to $150 for a regular room on the day I was staying — made it not practical.

So I made my reservation for a regular room and crossed my fingers. Hey, I was determined to have a good time no matter what. Turned out I didn’t need to worry about that part of it. 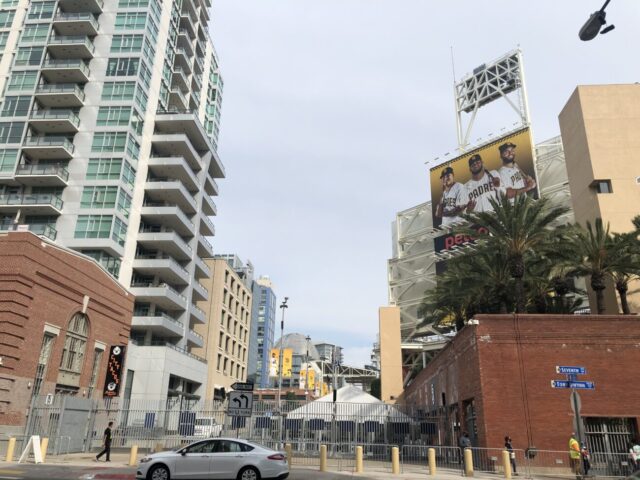 I arrived in San Diego in the early afternoon, a few hours ahead of the scheduled 5 p.m. first pitch for Yankees-Rays. I checked in and was given a room on the 18th floor. Great, I’ll be plenty high enough! I thought.

I ascended the elevator and looked for my room, which I could quickly see was near the end of the hall. This looks promising! I mumbled to myself.

After opening the door and putting my stuff down, I made a beeline to the window and opened the curtain.

Drat! I had a terrific view of San Diego … just the wrong side of it, with the convention center and the bay in front of me.

Turns out, the Marriott had this whole fan-watching thing down pat for MLB games. I went up to the lounge just after checking in and ran into the manager, who was kind enough to let me in and look around.

They were already setting up the rail area — the only part of the bar space that has unobstructed views toward Petco Park — with reserved seating signs for the folks that bought the baseball package. Anyone who didn’t buy it was free to come up, but would get seats elsewhere in the bar on a first-come, first-serve basis. Social distancing rules meant there would be little opportunity to move around.

I asked about the popularity of the lounge for watching live games during the 2020 MLB season and was told that, while some fans showed up for select games in the regular season, things really ramped up during the Wild Card Series, with the hometown Padres hosting the St. Louis Cardinals.

A local TV station did a story about it that week — and, as it so happened, the same news crew came back on the day I was there to document the party for the Division Series.

To gain access to the lounge for game-watching, I had to line up in the lobby 15 minutes before the bar opened at 4 p.m., one hour before first pitch.

Hotel guests would get priority, so I was good there. The fact that the Yankees were one of the teams involved made it tougher — their popularity meant a lot of their fans were around, ready to take advantage of the same opportunity.

Suddenly, my quest to see a live MLB game felt more challenging, and more exclusive, than I had expected.

Getting into the club

After a bit of walking around the Gaslamp Quarter to check out the scene, I returned to the hotel lobby at about 3:30 p.m. to find about 15 or so fans milling about, waiting to line up. Of that group, all but four were wearing Yankees gear, and that party of four was decked out in Padres gear — San Diego was getting ready to meet the Dodgers in the NLDS later that night.

By the time the lineup took place, the group had swelled to about 40, nearly half the allowed capacity of the lounge, according to the manager I had spoken with earlier. A few Dodgers fans had made their way in, too, but the group as a whole was still pretty solidly pro-Yankees.

I was 15th or so in line, and got in about 10 minutes after the bar opened. A security guard went over rules with me — stay at your assigned table as much as possible, wear a mask if you get up to walk around, and so on — and then I got a nice bar table to myself. 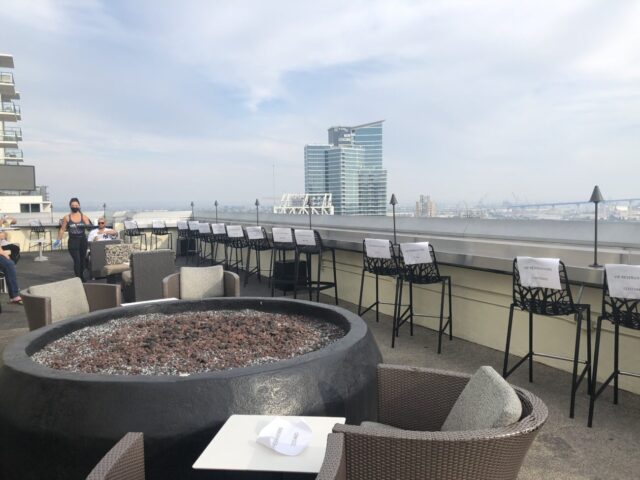 The only problem with that spot, of course, was I couldn’t actually see into Petco Park from where I was. I tried not to get hung up on that immediately, though, because a server quickly arrived at my table.

A caveat of watching the game from the lounge, for those who didn’t reserve the baseball package, was that you had to buy food with your first drink order. But that was OK — I was hungry, and having a few buffalo wings to go with my Stone IPA (when in San Diego, dont’cha know) sounded pretty appealing at that point.

When the game started, the TVs were fired up and it felt like any other outdoor sports-bar atmosphere I had ever experienced.

The fans who could see onto the field whooped and hollered whenever the Yankees did something positive. As it turned out, what they were seeing on the field was happening a full 10-12 seconds before it was seen on the TVs, so I decided the rest of the way to let them tell the story of what was going on.

There were a few moments where they got plenty loud, like when Yankees slugger Giancarlo Stanton hit a mammoth home run. A party in front of me spent time passionately discussing the game of Moundball.

The drinks kept flowing, the patrons stayed respectful with social distancing rules, and everyone appeared to have a grand time — even though the Yankees would wind up losing. 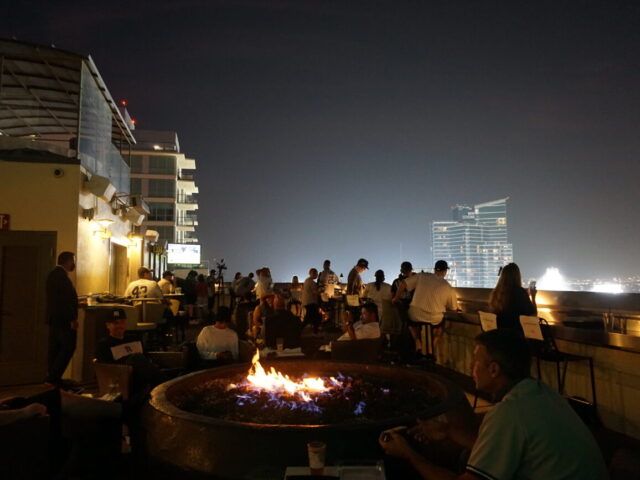 You might be wondering: How can I count this as having watched a live MLB game if I didn’t have a proper view into Petco Park?

Well, I did get up a couple times to peer over the railing when other patrons vacated their spots. I got the picture at the top of this page at that point. And I did see an out and a base hit live.

So for me, it counts. In this weird year that is 2020, you gotta take whatever you can get.

As I was leaving the lounge following the game, a hotel worker got in the elevator with me, someone I had talked to briefly when I first arrived. We rode down to the lobby in our socially distanced spots in the corners. “How was it?” he asked me.

“Great,” I told him, and added that the best part was getting to experience that buzz of being part of a big sporting event with a bunch of fans for the first time in months. “I didn’t realize how much I missed that,” I said.

“We all miss it,” he said, and then the doors opened to the lobby.

He’s right, and for me, that’s what made the whole experience worth it.