A brief history of Super Bowl field design, as told through electric football 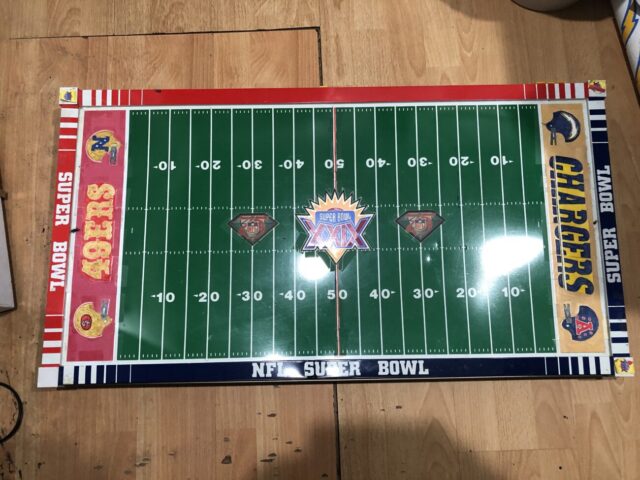 When I was a kid, I received an electric football game for Christmas. I was immediately smitten by the large field and the design of the game, and I spent large chunks of my childhood using it to recreate Super Bowls past as well as any other game I could think of.

The “electric” part of the game, where you plug in the metal field so that it vibrates, making the players on top of it move, quickly fell out of favor with me. But I continued to play the game “manually,” in a manner similar to playing chess, because I was fascinated with the visual of having 3-D players on a field.

Though the game initially came with just two teams out of the box — the then-Los Angeles Raiders and Washington, the matchup of Super Bowl XVIII — I eventually went about ordering more sets of 11-player plastic teams via mail order.

By the time I reached my high school years, I had nearly every NFL team in my collection. At that point, I didn’t have much time to play games. But for as long as I could, I continued a tradition I had begun a few years prior: Decorating my field each January in accordance with that year’s Super Bowl matchup.

Doing that kindled a fascination that I still have to this day: How does the NFL design its field for the Super Bowl?

Decorating my electric football field has made me acutely aware of what the league does, and it has been fun tracking what has changed over the years.

For a more comprehensive history of Super Bowl field design, you can check out sites like SportsLogos.net and Uni Watch, both of which have done thorough and informative posts on the subject.

Then there’s the Gridiron Fields Database, which has an image of the field design for every Super Bowl ever played. It’s already updated for how the field at Raymond James Stadium will look for Super Bowl LV between the Chiefs and Buccaneers!

It’s fun reviewing these sites to get a sense of how the NFL has changed the design as the years have progressed. As a bonus, you can also see how teams’ logos have changed, as well as the Super Bowl logo, which famously went from a unique design for each game to a more boring template branding starting with Super Bowl XLV in 2010.

The first time I decorated my electric football field was in 1990, for Super Bowl XXIV between the 49ers and Broncos. I don’t have a picture of it, but back then I was limited to using construction paper and drawing the team and game logos myself on construction paper, then taping them to the field.

Needless to say, my initial attempt to decorate my electric football field was a crude one.

I got slightly better over the years, as I learned to trace logos. Then, I got the bright idea to visit my local stationery store each January — dependably, they’d have items like paper plates with that year’s Super Bowl logo on them, and I would cut them out and affix them to my field (first with tape, then with rubber cement).

When I got to Super Bowl XXIX in 1995, I found both the game logo and the NFL 75th anniversary design the league was using that season and used them on my field (see photo at the top of this post). However, I was limited to the sizes I could find, so I wound up putting them in the wrong places in relation to how the real Super Bowl field was designed.

Oh well, you win some, you lose some. At least I got the end zones mostly right, if not still done in a crude fashion. 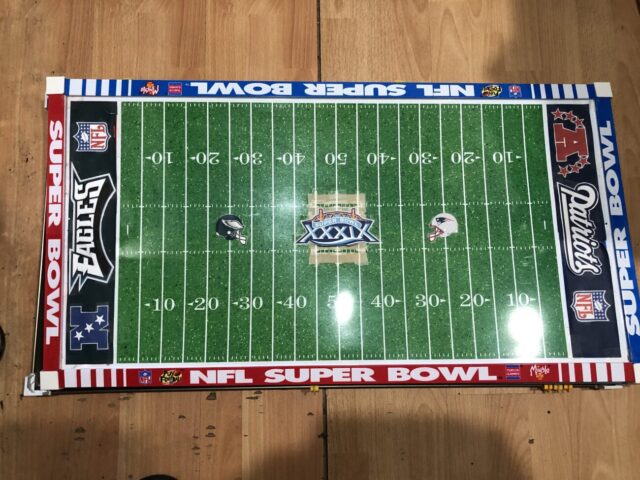 Not long after Super Bowl XXIX, I packed up my electric football game. Things like college, dating and finding a job got in the way.

And while I was still enamored with the field design for each Super Bowl, I didn’t go about decorating my field. I just didn’t have time.

Then, at my first job out of school, I was reintroduced to electric football. Someone had bought the game, on the company’s dime, for a photo shoot. Once that was done, no one wanted the big, cumbersome field hanging around the office, so word was put out that whoever wanted it could take the game home for free.

I nearly injured my shoulder raising my hand.

It so happened that I acquired the new field around the end of the NFL regular season. A few weeks later, when the Super Bowl matchup was set (Ravens vs. Giants, Super Bowl XXXV), I was compelled to decorate again.

This time I had better tools at my disposal: A printer, and a database of logos and colors from which I could more accurately print out materials.

What I didn’t have was a site like Gridiron Fields Database, or social media to find images of the real field in the process of being painted, so I was still guessing on which logo went where.

But you have to admit, the look of my decorated electric football field had gone from crude to crisp.

For a five-season span, I went back to decorating my field, because it was just so much fun. The last time I did it was in 2005, when the Eagles and Patriots met in Super Bowl XXXIX (see photo above). I still got it wrong in that the NFL logo was at midfield, not the game logo, but oh well.

I would move cross-country later that year, so the electric football field would get packed up again. And this time the field, as well as its predecessor, wouldn’t see the light of day much for quite some time — or, at least, until I decided to take pictures of them a couple weeks back.

The nostalgia of electric football

Sadly, I don’t have time to decorate one of my fields for this year’s game, as much as writing this post has rekindled my interest in it.

But I do still have my electric football players, which I keep in a shoebox in my closet. Every so often I’ll pull them out, and much like the game tickets I’ve kept over the years, I’ll take a look at them again.

It’s a nice way to think back fondly to one of the favorite pastimes of my youth. And every year, watching the Super Bowl rekindles those same feelings.