What will watching a Seattle Kraken home game be like? 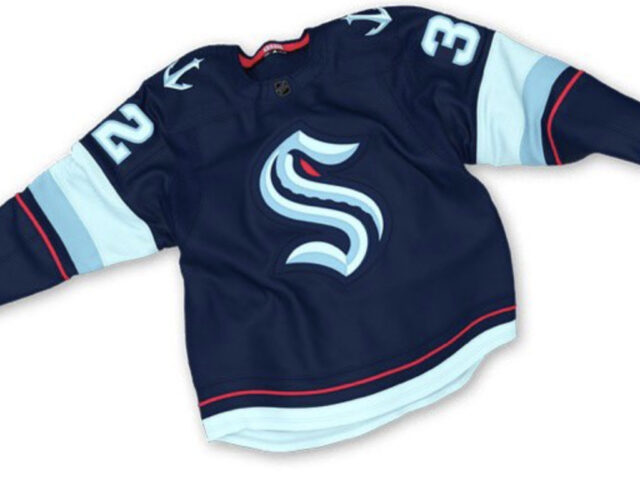 Last week, the NHL’s 32nd franchise revealed in a epically teased announcement that it would be known as the Seattle Kraken.

This, coupled with the revelation in June that its home arena will be known as Climate Pledge Arena, gives Seattle hockey fans — not to mention fans throughout the league — something to be excited about as they wait for the Kraken to begin play.

And what’s not to be excited about? Though the name is undoubtedly polarizing, the designs of the jerseys and logo were lauded almost universally. Kraken merchandise sales went through the roof in the hours and days since the announcement, even eclipsing the buzz around the reveal for the previous NHL expansion franchise, the Vegas Golden Knights.

But now, let’s look ahead to the fall of 2021, when the Kraken is scheduled to take the ice for the first time. What will the fan experience be like at Climate Pledge Arena? What will it be like traveling to hockey games in Seattle?

While it’s obviously impossible to know precisely until we get there, we can work with what we know right now, plus examine past precedent as well as what we know about the sports scene in Seattle, to map out what we can expect when the 2021-22 season rolls around.

It’ll be easy to compare the Seattle Kraken to the Golden Knights and the near-instant success, both on and off the ice, that they experienced in Las Vegas when they began play in the fall of 2017. But it’s important to note the differences in their situations as well.

The Las Vegas market was an unknown in terms of how it would respond to getting a sports franchise of its own. Obviously, Vegas residents have taken to the Golden Knights very well, but in retrospect, the fact that the market finally had a team to call its own probably should have made the Knights’ popularity less than surprising.

Seattle, of course, doesn’t have this mystery surrounding it. We know they fervently support the Seahawks (witness the 12th Man fervor at CenturyLink Field) and, even though they haven’t been a contender for some time, the Mariners.

Seattle Sounders FC and the Seattle Storm of the WNBA have terrific support, and many sports fans in the region still long for the return of the NBA’s SuperSonics in some fashion, be it expansion or relocation.

So even before looking at season-ticket deposits or other factors, we know that Kraken games will be a tough ticket early on. Even in their third season, the Golden Knights were still a difficult ticket to get, with upper-deck seats at T-Mobile Arena routinely selling for north of $100 on the secondary market. Expect it to be similar early on for the Kraken.

How the Seattle arena scene will look

The Knights’ T-Mobile Arena, opened in April 2016, was staging events for a year and a half before the Golden Knights’ first game. That includes hockey games — the Los Angeles Kings held a pair of preseason games there the prior season. So we already had an idea what hockey would be like there.

That most likely won’t be the case for Climate Pledge Arena. The former KeyArena is literally a shell of itself right now — the Kraken’s name reveal announcement took place at the arena site, which showed that the building’s iconic roof is really all that is there at the moment.

Climate Pledge Arena is expected to open to events in the summer of 2021, a couple months before the NHL exhibition season typically begins. So it’s very likely that the first hockey game to take place in the renovated facility will be a Kraken exhibition game.

Until then, we can check out all the cool design renderings of what the arena will look like. 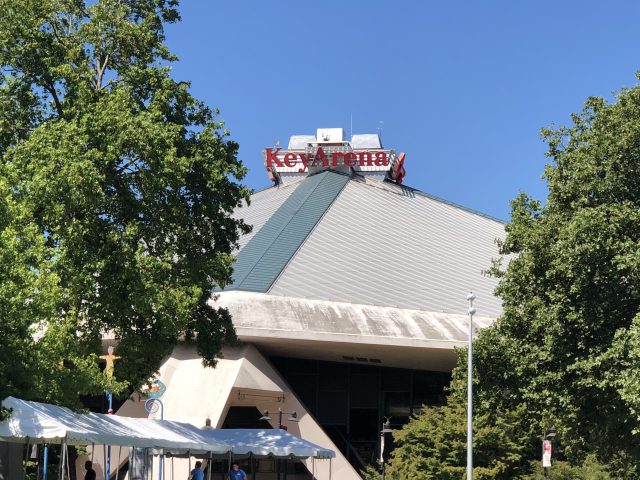 KeyArena as it looked in summer 2018

Traveling to Seattle for a Kraken game

If you’ve never been to Seattle, Climate Pledge Arena is located at Seattle Center, a large entertainment campus on the north edge of downtown. The city’s iconic Space Needle is located here, just a short walk from the arena, so if you’re unfamiliar with the city, use the Space Needle as your guide to get to the hockey game.

The city’s sports fans, and traveling NBA fans with long memories, might know the Seattle Center arena site well from when the Sonics played there, but for the last decade only the Storm have played there.

Most of the business catering to sports fans has migrated to the SoDo district, where CenturyLink Field and T-Mobile Park are located. The area is full of restaurant and sports bars and is served well by public transit — neither of which, at least at the moment, can be said about the area around Seattle Center.

That’s not to say that Seattle Center is located in a desolate area, but it’s more one that caters to tourists and residents of the neighborhood than fans coming in for sporting events. It remains to be seen how much that changes by the time the Kraken’s first season rolls around.

The primary way for visitors to get from downtown to Seattle Center, other than walking about a mile or more, is to use the Seattle Center Monorail that runs between the two points. The Kraken franchise already announced in February 2020 that riders who present a ticket to a hockey event on that day will be allowed to ride the monorail for free, part of a greater effort to encourage fans to use public transit to get to games.

Check out our Seattle sports travel guide for a deeper look at what the sports scene is like in the Emerald City.

How the Seattle Kraken fan base will take shape

When Vegas entered the league, the NHL expansion draft was set up in such a way that the Golden Knights were expected to be competitive in less time than it typically takes expansion teams. But no one anticipated just how quickly, as the Knights reached the Stanley Cup Final in their first season of play.

Because of that, expectations will be exceedingly high for the Kraken. Maybe a Cup Final appearance in their first season is asking a little too much, but it’s very possible that anything short of the playoffs will be a big disappointment, even for Year 1.

How will this manifest itself in the Seattle hockey fan? Well, expect the excitement over simply having a team to rule the atmosphere early on, but if the Vegas model is followed, the “honeymoon period” will turn into fervent fandom quickly.

The Golden Knights, for example, developed fierce rivalries with the California teams — specifically, the Los Angeles Kings and San Jose Sharks, who were playoff opponents in the Knights’ first two seasons. In the Sharks’ case, bitterness lingers from the teams’ memorable playoff series in 2019.

The Kraken will have a built-in rivalry with the Vancouver Canucks, the closest franchise to them geographically, but it will likely take the two teams facing off in the postseason for the hatred to become tangible — and for fans of the Kraken, if they hadn’t previously followed the NHL, to truly understand the passion for the game that fans carry.

Will the Seattle Kraken have a mascot? And what will it look like?

It took the team name announcement for hockey fans to finally come to grips with what a “kraken” actually is: basically, a mythical sea monster, like a squid or octopus.

So will the Kraken have a giant fuzzy blue octopus roaming the stands at Climate Pledge Arena? As of now, who knows, but another NHL franchise already has dibs on the octopus as a “mascot.” Undoubtedly, the Detroit Red Wings won’t give that up lightly.

What we do know is this: Just like filling their roster, the Kraken has big shoes to fill in living up to the potential of the previous mascot to hit the NHL scene.