Our guide to CenturyLink Field in Seattle includes information on events, tickets, parking, public transportation, nearby hotels and restaurants, seating and more. Read on to find out how to get the most out of your gameday experience.

CenturyLink Field is a beautiful football stadium in a beautiful city, serving faithful Seahawks fans and the event-goers of Seattle with all the seating, parking and amenities expected of a modern NFL stadium.

Located in the SoDo (South of Downtown) section of Seattle and home to a Seahawks team that has always boasted one of the NFL’s most passionate fan bases even before it was finally rewarded with a championship after the 2013 season. All of that alone is reason enough to check out pro football in the Pacific Northwest.

But if you’ve paid attention, all of that stuff is likely not the most prominent thing you’ve heard about CenturyLink Field. No, the thing that tends to put the stadium front and center is the noise.

The 12th Man has a way about bringing the noise, sometimes at record-breaking levels. and if you’re planning your first trip there, you may find yourself wondering: Does it really get that loud there? At least, that’s what went through my mind for a while as I contemplated making a trip there.

Finally, the opportunity presented itself in the form of a free fall weekend and low airfares, so I made plans to check out a Seahawks home game with friend and Seattle resident Vagabond Designer. I brought a raincoat but not earplugs, and only time would tell whether that was a mistake.

Even if you aren’t able to visit for a Seahawks game, you can also watch Seattle Sounders FC of Major League Soccer. While their supporters don’t fill up CenturyLink Field the way the 12th Man does — the upper-level seating areas are typically covered for Sounders events — they can be just as boisterous, and in fact their fan base is considered one of the most fervent in the league.

Getting to CenturyLink Field

As mentioned above, CenturyLink Field is located south of downtown (and south of the Pioneer Square section of town as well), right next to T-Mobile Park. I don’t know this for sure, but it looks from ground level and to the naked eye as though T-Mobile is actually larger than CenturyLink because of its behemoth retractable roof, and in what other city can you say the baseball stadium looks more imposing than the football stadium?

The stadium’s location means it’s easily accessible from a number of directions, including the always-trafficky Interstate 5 and I-90 that approaches from the east. There are parking lots scattered all around CenturyLink Field, including a pretty big parking structure just south of the stadium, but you can expect the usual heavy traffic if you’re driving in.

One thing to consider, though: When looking at a system map, you may see the “Stadium” stop and automatically assume that’s the station you need — and you would not be wrong. But that stop is closer to the ballpark than it is to CenturyLink Field, and you’ll likely find it super-crowded as the start of your event approaches.

If you’re using the Sounder, the region’s commuter train service, or even Amtrak, your arrival is made even more convenient by the fact the King Street Station is right there, just northeast of the stadium. A walk up the staircase to the aforementioned pedestrian bridge, then a descent to the CenturyLink Field parking lot, and you’re there.

Things to do around CenturyLink Field

Just look around — there’s plenty to do nearby, and not just the usual pre-NFL game tailgate scene that fills the CenturyLink Field parking lots. The alleyways around the district — at least those that have heavy pedestrian traffic — are usually dotted with food trucks and street vendors selling snacks, beverages and souvenirs. It makes for a pretty lively atmosphere that you can experience just by walking to the game.

Or, if you follow the handy tip listed above and take light rail to the International District station, you can find all sorts of restaurants within walking distance of the stadium — some of them Asian, owing to the district, and some not.

For our part, on this day we did perhaps the most Seattle thing a visitor could do and stopped off for a coffee at Starbucks while waiting out the rain a little bit.

Watching a game at CenturyLink Field

Definitely give CenturyLink Field this: It is one of the most unique-looking stadiums in the NFL. It’s a horseshoe-shaped venue with an open end that allows people inside to view the downtown skyline to the north.

If you’re watching an event at CenturyLink Field, there’s another reason to look at that open end, though: The Hawks Nest, the triangle-shaped seating section that’s topped by a vertical videoboard. You just don’t see features like that in many stadiums, and it’s one of those things that you immediately identify with Seattle.

Meanwhile, CenturyLink Field’s seating areas along each sideline are covered by a distinctive arched overhang that covers most of the upper deck from the rain (though not us, since our seats were in the corner and just out from under the overhang). I’m no architecture expert, but I’m willing to bet it’s this feature that helps amplify the crowd noise for CenturyLink Field events.

Ah yes, the noise. It’s understandable to be skeptical about the claims of “world’s loudest stadium” and such. But there really is no questioning the passion of the fan base that’s known collectively as the 12th Man, and the Seahawks go to great lengths to make sure the fans know they’re appreciated — banners and flags with the number 12 on them are everywhere (12 is actually retired by the team in tribute to the fans), and an eventful pregame ritual involves the raising of a 12th Man flag at the stadium’s southern end by a person of prominence.

Maybe that’s why it’s so easy for the fans to get loud. Before the game, Vagabond Designer, whose love of rock concerts is another reason he and I are friends, told me that he found his ears ringing after only one live event in his life — a Seahawks game at CenturyLink Field. When he said that, I really started thinking this whole loud thing was no joke.

Before the game, though, you can get your throat ready for some screaming by checking out all the stadium has to offer. We took a stroll through the main concourse on the stadium’s west side, which had plenty of cool displays — including a giant Super Bowl XLVIII display (popular among the picture-takers) and a mural containing the helmet of every high school football team in the state of Washington.

Our seats were in the corner of the 300 level — not prime seats by any means, but you could see everything, including the videoboards at the north end and that nice view of the skyline. As mentioned, our seating area was not protected from the rain, so the raincoat I brought really got a workout, especially in the second half when the rain picked up and drenched CenturyLink Field.

Oh, and that happened to be when the noise picked up as well. Seattle was mostly sluggish in the first half and went into the break trailing, then turned it up to win the game going away.

It got noticeably loud for me at two points: Right before the opening kickoff and after the Seahawks took the lead in the second half. I don’t think it was record-breaking, and my ears weren’t ringing, but I can legitimately say it was about as loud as any sporting event I’ve been to. And hearing that for myself was definitely worth the experience.

Food and drink at CenturyLink Field

If you don’t mind walking around, take the time to explore the varied food options at CenturyLink Field, which do a good job of representing local cuisine. 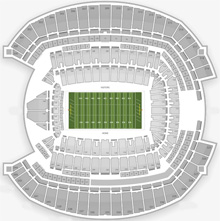