What it’s like returning to arenas: A night at Staples Center 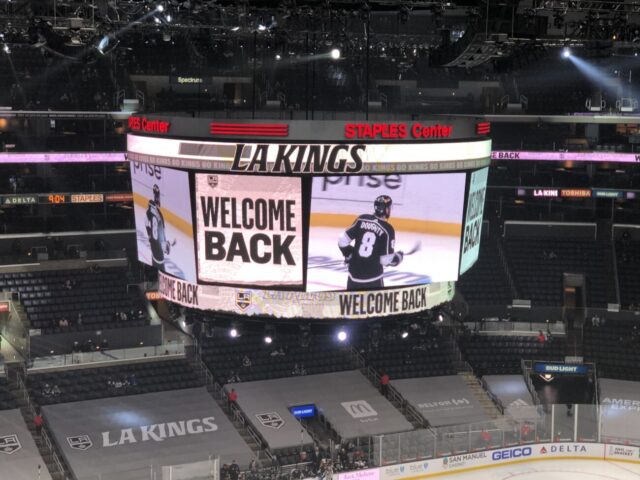 All around the country, sports arenas have seen a glorious sight: Fans returning to cheer on their teams.

As the situation has improved with the COVID-19 pandemic in the U.S., capacities have increased. Now, with the NBA and NHL both into their respective playoffs and the public health situation becoming increasingly optimistic, we’re starting to see arenas half-full or even more.

Fans returning, arenas being loud — it all feels normal again. At least when you watch games on TV.

But what’s it like being in the arena itself?

I got a small taste of it earlier this month by returning to the arena where I watch the majority of my live sporting events: Staples Center in Los Angeles.

I’m a Kings season-ticket member, so I had access to a limited ticket sale and managed to attend one of the team’s final regular-season games (sadly, but not surprisingly, the Kings missed the playoffs).

I prepared myself for a vastly different experience, and set my expectations accordingly low, but in the end I was pleasantly surprised by how the whole thing went. 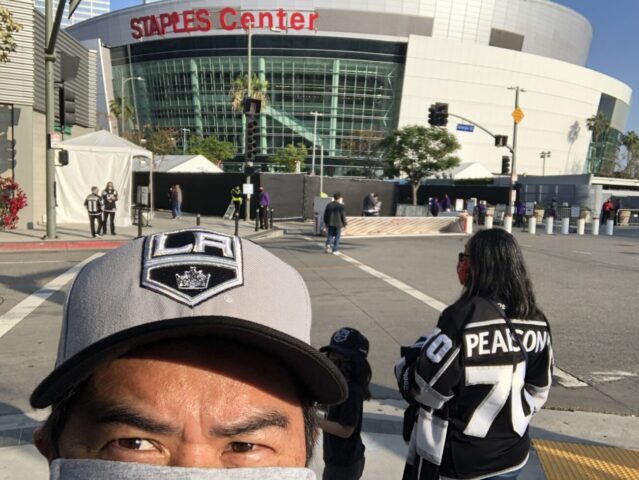 Just getting into the building turned out to be the hardest part of game night. It came with quite a bit of planning and a fair amount of consternation about things that could go wrong that might result in us missing the game.

For one thing, there was a strict restriction on bags being allowed inside. Not even the clear bags that have become standard for sporting events would be permitted inside Staples Center. This would be a challenge: Mrs. Fan and I were bringing our 5-year-old daughter Little Fan, but I wouldn’t be able to bring the usual supplies (milk, snacks etc.) that would keep her happy in case she got bored or unruly.

Secondly, all guests were required to either be two weeks out from their final vaccination dose or present proof of a negative COVID-19 test within 72 hours. No problem, I thought — I purposely picked this particular game, a Friday night against the Avalanche, because it would be exactly two weeks after my second shot (Mrs. Fan was well ahead of me, having received her two doses before I got my first).

But then, a few days before the game, I received an email from the Kings outlining regulations for game attendees, and the wording sent me into a slight panic: It said that vaccinated guests needed to have their final shot “more than” two weeks before the game date.

I sent off a hurried email to the Kings’ customer service address asking to clarify if I would be OK, and it took them a day to answer, but they replied that I would be fine at exactly two weeks.

Whew. Crisis averted, or so I thought.

We arrived at the arena ready to go, and confidently presented our vaccination cards. Then, the usher pointed at Little Fan and asked, “Does she have a negative test?”

D’oh! I had mistakenly believed that toddlers were exempt from needing to show test results, because it wasn’t explicitly stated in Staples Center’s lengthy guest regulations.

We were told we’d have to walk two blocks to a pop-up testing center set up specifically for arena guests. When we got there, I counted about 5-6 other parties, half of whom had small children in tow. At least anecdotally, it seemed that I wasn’t the only one confused about the rule for toddlers.

I don’t blame anyone, least of all the Kings or Staples Center, for strictly enforcing the rule. I just wish it had been more clearly stated. In the end, it cost us $45 for the test and half an hour of time waiting for the result to appear on an app we downloaded for the occasion. But we finally made it in without a moment to spare. 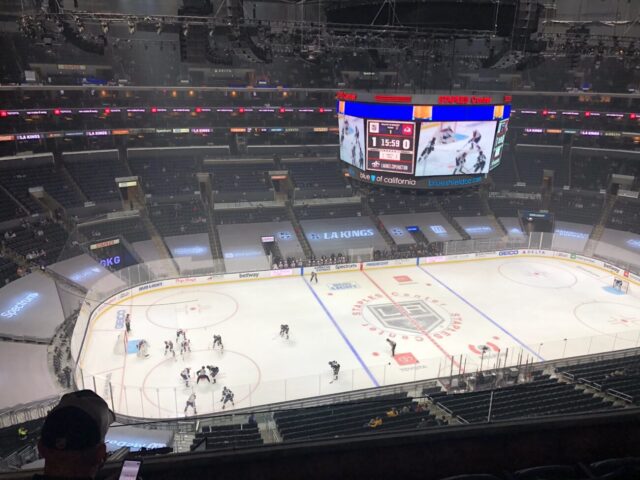 We didn’t have a moment to spare because we had promised Little Fan we’d stop by the team store as soon as we arrived. She had outgrown her Kings jersey during the pandemic and was stoked about getting a new one.

Buying her an Anze Kopitar model that fit her, though, cost us the opportunity to get into our seats by puck drop. We finally made it to our seats in Section 320, where our previous season seats had been located, in time to catch the Kings score the game’s first goal.

About 2,500 fans were allowed in an arena that seats more than 18,000, so it wouldn’t be wrong to say the experience wasn’t, well, normal. The only time you noticed the crowd was when the Kings scored their two goals.

Otherwise, it was eerily quiet, almost like we were watching practice, not a game. Piped-in crowd noise, complete with delayed oohs and aahs whenever something significant happened like a save or big hit, only served to make the atmosphere stranger.

Another thing they were very strict on at Staples Center: No eating or drinking in the seating bowl. Everyone had to keep their masks on. The concession stands were open, but anyone who wanted to eat had to either do so at a handful of standing tables smattered about the concourse or step outside, where many more tables as well as several food trucks were stationed.

Bathrooms were meant to be partitioned off, with every other urinal in the men’s room closed for social distancing purposes, but with so few fans in the arena in general, it didn’t appear to be much of an issue to me.

So yeah, the whole experience felt … not complete. And yet, it still felt good to be there. I had missed watching the Kings live, and so had my family. Returning to the arena was just another step forward toward normalcy.

With the Kings’ season now over, I won’t get to experience it again until the fall, when hopefully we will see Staples Center fully open again. But it sure was nice to have a taste of it to tie me over until then.