Our city guides are meant to showcase the best of a metropolitan area from the perspective of a sports fan visiting to watch their favorite teams and games — here’s our guide to the best of Baltimore sports travel.

Through the lens of the sports fan, the city of Baltimore needs no selling as an appealing destination.

It compares well with its East Coast neighbors in terms of passionate fans, and its venues — including the major-league park that set the trend of “retro” design — are worth seeing in and of themselves.

But as a tourist destination, the town known as “Charm City” is something of a underappreciated gem, full of history that dates back to the American Revolution and interesting sights and events.

Though Baltimore’s high crime rate, and its unflattering depiction in shows such as “The Wire,” give it a less-than-stellar reputation, the city is welcoming — and largely safe — in the areas most frequented by tourists. And Baltimore has plenty of under-the-radar neighborhoods worth exploring as well.

From good food to inspiring sights, there’s plenty to see and do in Baltimore for sports travel and more. Here’s a travel guide to discovering Baltimore’s rich history and culture — of which its sports teams are a big part.

Map of Baltimore venues and attractions

Where to watch sports in Baltimore

The core of Baltimore’s professional sports scene can be found on a swath of land on the south edge of the downtown area, where the city’s baseball and football teams both play.

Oriole Park at Camden Yards and M&T Bank Stadium were opened six years apart and are separated by a viaduct and a collection of shared parking lots — because of the latter, the Orioles and Ravens make it a point not to schedule games on the same day. Both stadiums are easily reachable from the downtown area.

Before those venues were built, the Orioles and Baltimore’s previous NFL team, the Colts, shared venerable Memorial Stadium, located on 33rd Street north of downtown. The stadium no longer stands — it was torn down in 2001 after the Ravens played two seasons there — but public athletic fields serve as a reminder of the site’s history.

For one day a year, in mid-May, Baltimore becomes the capital of the horse racing world when it hosts the Preakness Stakes, the middle jewel of the Triple Crown. The race is held at Pimlico Race Course, north of downtown in the Park Heights neighborhood, though the long-term future of the venue is uncertain. 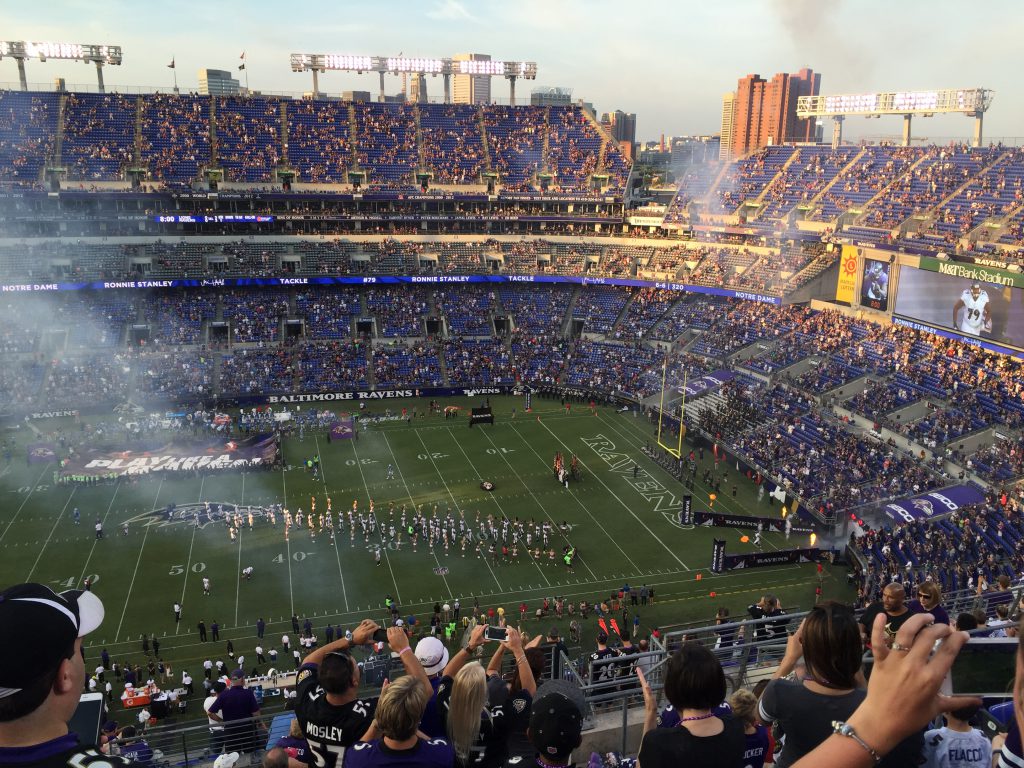 Arriving and getting around Baltimore

Visitors to Baltimore fly in via Baltimore/Washington International Thurgood Marshall Airport (BWI), which offers service from all major U.S. carriers. The airport positions itself as a budget alternative to Dulles and Reagan National Airports in Washington, and fares to BWI frequently cost less than comparable fares from the two D.C.-area airports.

Amtrak passes through Baltimore as part of its popular Eastern Seaboard route. The city’s Penn Station is located in the Midtown area, and there is also a BWI station. Greyhound and other bus services also frequent Baltimore.

For drivers, Interstate 95, the major north-south route along the East Coast, runs through the heart of Baltimore. I-70, which runs east from such cities as Columbus, Ohio, and Indianapolis, terminates a few miles west of the downtown area. I-695, also known as the Baltimore Beltway, is the loop route that circles the city.

For sports travel in Baltimore, use the downtown area as your guide, as it boasts branches of most major hotel brands — many of them in the blocks between Camden Yards and the Inner Harbor.

If an Orioles or Ravens game is the primary reason for your travel to Baltimore, these hotels are your best option, as most will be within walking distance of the stadiums, and many fans of visiting teams often use one of the major hotels as a meeting point if not a place to stay.

Click here for a guide to hotel options for travel to Baltimore.

From I-95, drivers can take I-395, a short feeder route that heads north past the stadiums and into the downtown core, eventually turning into Howard Street. From the north, Interstate 83 leads into the central city as well, eventually terminating a few blocks north of the Inner Harbor and becoming President Street.

It is not quite as easy to get around Baltimore via public transit as most of the other major cities along the Eastern Seaboard, but there are options.

The Maryland Transit Administration (MTA) operates both a light rail and a subway service; the former is more useful to visitors in that it connects downtown with BWI Airport and runs to both stadiums, with service usually increased for events.

Use the Camden station for Camden Yards and the Hamburg Street station to get to M&T Bank Stadium. The subway line runs generally east-west between Johns Hopkins Hospital and the suburb of Owings Mills, and does not serve the stadiums.

To explore the areas surrounding downtown, one interesting way to get around is the Baltimore Water Taxi, which runs from the Inner Harbor to nearby neighborhoods such as Fells Point, Locust Point and Canton.

A more conventional, but more economical way to get around is the free Charm City Circulator, which runs a series of bus routes around the central city and nearby neighborhoods.

Parking lots are plentiful around both stadiums, with the largest number of spaces between the two. Entry into the lots can be purchased in advance for both teams, or on game days for the Orioles (the Ravens offer season-long permits for these lots).

With the downtown core close by, slightly cheaper rates can be found in any number of private lots and structures in the blocks to the north or west. 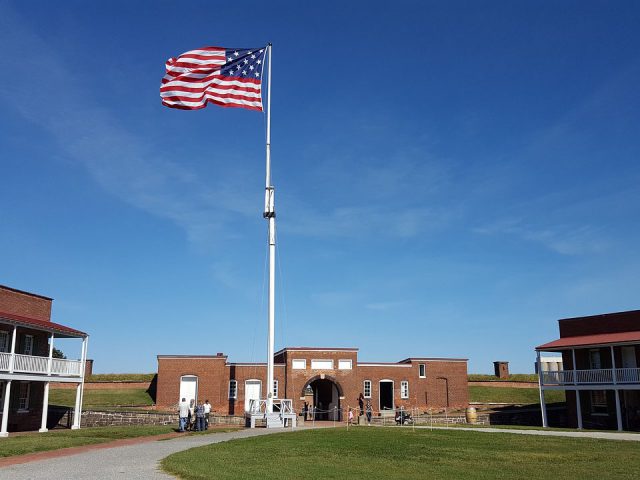 Things to see and do in Baltimore

Even if your reason for coming to Baltimore is sports travel, the region has so much more to offer, so use the guide below to find out some of the things to see before watching your teams play:

The city has a significant claim to fame in American history as the site of Fort McHenry, where Francis Scott Key was inspired to write “The Star-Spangled Banner” in 1814 during the Battle of Baltimore. Today, the national monument stands just outside downtown in the Locust Point area.

Two more historical sites worth visiting are in the Mount Vernon neighborhood just north of downtown — the “original” Washington Monument, a 178-foot tall structure designed by the same architect who later drew up the more famous memorial to George Washington in the nation’s capital, and the Baltimore Basilica, the country’s first Roman Catholic cathedral.

Many visitors to Baltimore will stay in the downtown area and near the Inner Harbor — and that’s OK, because there’s quite a bit for the visitor to do there.

Attractions range from the popular National Aquarium, Maryland Science Center and American Visionary Art Museum to the numerous historical ships in the harbor itself — including the USS Constellation, a restored Civil War-era warship.

You can learn about two famous Baltimoreans in the downtown area. The Babe Ruth Birthplace and Museum, located a few blocks west of Camden Yards, is dedicated to the life of the Hall of Fame slugger.

Also west of downtown Baltimore is the Edgar Allan Poe House and Museum, which celebrates the legacy of the poet and author of “The Raven” — and it has a sports context now, as the football team derives its name from the poem. Poe’s gravesite is a few blocks away at Westminster Hall. 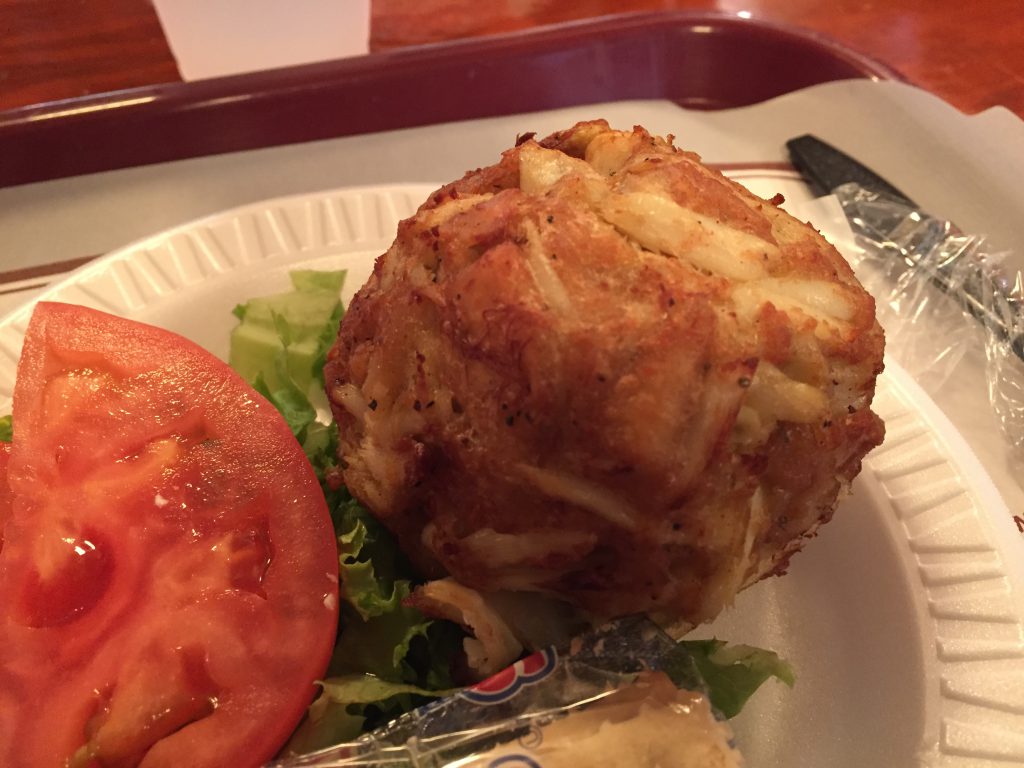 Take in the vibrant food scene of Baltimore, which draws from its location along the vast Chesapeake Bay. There are a few items worth seeking out:

• Steamed crabs/crabcakes: Crab — specifically, the blue crab — is usually the first thing foodies think of when they think of Baltimore, and they’re typically sampled in one of two ways — whole, steamed and generously dusted with Old Bay seasoning, or formed into a more elegant crabcake.

For the former, head east of downtown to the Canton neighborhood at restaurants such as Captain James Crabhouse (2121 Aliceanna Street) or Bo Brooks’ Restaurant (2780 Lighthouse Point).

For the latter, perhaps the most well-known stop is Faidley’s Seafood inside Lexington Market (400 W. Lexington Street), which in itself is worth stopping in for its numerous eateries and merchants.

For those who don’t want to venture outside central Baltimore, the Boog’s BBQ stand at Camden Yards also serves a pit beef sandwich.

• Lake trout: Never mind the name, lake trout is basically what Baltimoreans call fried fish (usually whiting). You can find the dish at many of the quick-service “carry-outs” around the city.

• Natty Boh: Shorthand for National Bohemian beer, it’s a local favorite that can be found just about everywhere in the city.

Baltimore sports travelers can check out major college football and men’s basketball teams down the road, at the University of Maryland in College Park, and the Naval Academy is in nearby Annapolis.

But don’t discount the University of Maryland-Baltimore County (UMBC), which made a name for itself in 2018 when its men’s basketball team became the first No. 16 seed to beat a 1-seed in the NCAA Tournament.

Lacrosse is popular up and down the East Coast but Baltimore is a certified hotbed for the sport. The powerhouse men’s program at Johns Hopkins has won nine NCAA championships and has a rivalry with Maryland (which itself has three titles in the NCAA era).

As for minor-league sports, there are six baseball farm teams that call the state of Maryland home, most within easy driving distance of Baltimore. The two closest to the city are the Bowie Baysox (Class AA) and the Aberdeen Ironbirds (Class A). The latter is owned by Orioles legend Cal Ripken Jr., and the club’s home ballpark is named after him.

And if all this isn’t enough, remember that Washington, D.C. is just 30 miles south. For more on sports in the nation’s capital, check out our Washington sports travel guide.