Our guide to Lumen Field in Seattle includes information on events, tickets, parking, public transportation, nearby hotels and restaurants, seating and more. Read on to find out how to get the most out of your gameday experience.

Lumen Field is a beautiful football stadium in a beautiful city, serving faithful Seahawks fans and the event-goers of Seattle with all the seating, parking and amenities expected of a modern NFL stadium.

Located in the SoDo (South of Downtown) section of Seattle, Lumen Field (formerly known as CenturyLink Field) is home to a Seahawks team that has always boasted one of the NFL’s most passionate fan bases even before it was finally rewarded with a championship after the 2013 season. All of that alone is reason enough to check out pro football in the Pacific Northwest.

But if you’ve paid attention, all of that stuff is likely not the most prominent thing you’ve heard about Lumen Field. No, the thing that tends to put the stadium front and center is the noise.

The 12th Man has a way about bringing the noise, sometimes at record-breaking levels. and if you’re planning your first trip there, you may find yourself wondering: Does it really get that loud there?

In our experience, we can certainly support the claim that Lumen Field is one of the loudest venues in sports. But if you’re looking for a unique football-watching experience, it’s certainly worth your while to visit and see for yourself.

Even if you aren’t able to visit for a Seahawks game, you can also watch Seattle Sounders FC of Major League Soccer. While their supporters don’t fill up Lumen Field the way the 12th Man does — the upper-level seating areas are typically covered for Sounders events — they can be just as boisterous, and in fact their fan base is considered one of the most fervent in the league. 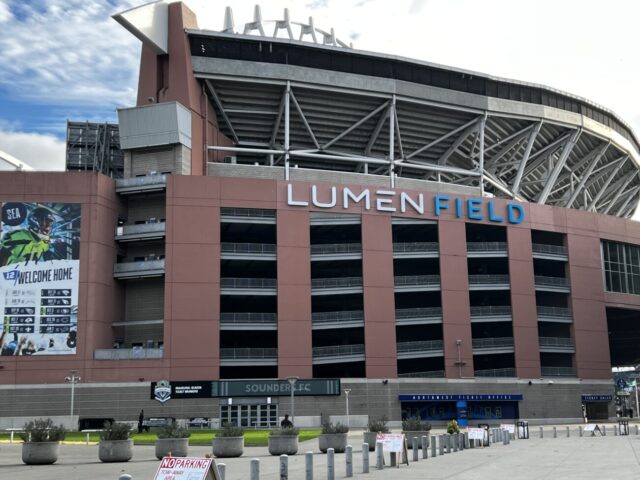 As mentioned above, Lumen Field is located south of downtown (and south of the Pioneer Square section of town as well), right next to T-Mobile Park. It’s difficult to tell for sure, but it looks from ground level and to the naked eye as though T-Mobile is actually larger than Lumen Field because of its behemoth retractable roof, and in what other city can you say the baseball stadium looks more imposing than the football stadium?

The stadium’s location means it’s easily accessible from a number of directions, including the always heavily traveled Interstate 5 and I-90 that approaches from the east. There are parking lots scattered all around Lumen Field, including a pretty big parking structure just south of the stadium, but you can expect the usual heavy traffic if you’re driving in.

One thing to consider, though: When looking at a system map, you may see the “Stadium” stop and automatically assume that’s the station you need — and you would not be wrong. But that stop is closer to the ballpark than it is to Lumen Field, and you’ll likely find it super-crowded as the start of your event approaches.

An alternative is to use the International District station, which is just a quarter-mile away from Lumen Field’s north side. Depending on where you’re coming from, you might find this stop to be more convenient, not to mention slightly closer.

If you’re using the Sounder, the region’s commuter train service, or even Amtrak, your arrival is made even more convenient by the fact the King Street Station is right there, just northeast of the stadium. A walk up the staircase to the aforementioned pedestrian bridge, then a descent to the Lumen Field parking lot, and you’re there.

The two closest parking options to Lumen Field are a surface lot just to the north, as well as a parking garage attached to the stadium’s south end. However, these spaces are sold to season-ticket holders first (meaning spots are rarely available for single-game purchase), and no tailgating is allowed in either lot.

The widest array of single-game parking options for Lumen Field events can be found starting several blocks to the north. Begin your search north of Jackson Street, or if you don’t mind walking a little bit, north of Yesler Way.

Most surface lots are small and have limited space, so try to park early if you’re attending a Seahawks game.

Looking for parking at Lumen Field? Buy parking on SpotHero.

Just look around — there’s plenty to do nearby, and not just the usual pre-NFL game tailgate scene that fills the Lumen Field parking lots.

The alleyways around the district — at least those that have heavy pedestrian traffic — are usually dotted with food trucks and street vendors selling snacks, beverages and souvenirs. It makes for a pretty lively atmosphere that you can experience just by walking to the game.

One unique pregame activity worth trying: Head to T-Mobile Park across the street. The Mariners open the party patio area behind the left-field bullpens for Seahawks games, allowing fans access to food and drink, live music and more. Admission for the party is $1 a person.

Or, if you’ve taken light rail to the International District station, you can find all sorts of restaurants within walking distance of the stadium — some of them Asian, owing to the district, and some not.

If you’re attending a Sounders match at Lumen Field, join the club’s faithful (known as the Emerald City Supporters) on their pregame “March to the Match,” which begins at nearby Occidental Park about 90 minutes before kickoff. 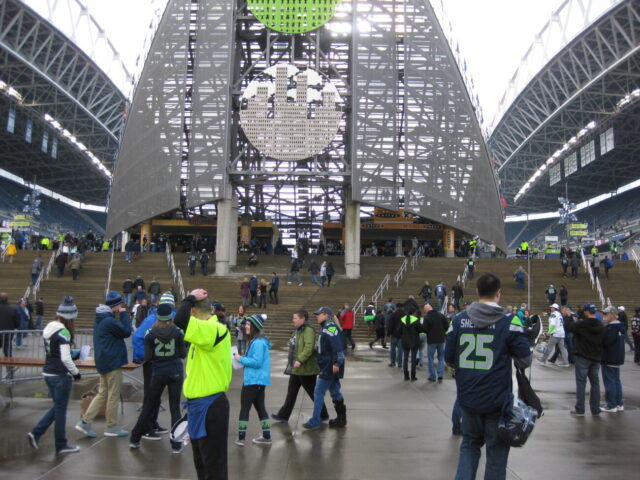 Watching a game at Lumen Field

Definitely give Lumen Field this: It is one of the most unique-looking stadiums in the NFL. It’s a horseshoe-shaped venue with an open end that allows people inside to view the downtown skyline to the north.

If you’re watching an event at Lumen Field, there’s another reason to look at that open end, though: The Hawks Nest, the triangle-shaped seating section that’s topped by a vertical videoboard. You just don’t see features like that in many stadiums, and it’s one of those things that you immediately identify with Seattle.

Meanwhile, Lumen Field’s seating areas along each sideline are covered by a distinctive arched overhang that covers most of the upper deck from the rain (though not us, since our seats were in the corner and just out from under the overhang). It’s this feature that helps amplify the crowd noise for Lumen Field events.

Ah yes, the noise. It’s understandable to be skeptical about the claims of “world’s loudest stadium” and such. But there really is no questioning the passion of the fan base that’s known collectively as the 12th Man.

And the Seahawks go to great lengths to make sure the fans know they’re appreciated — banners and flags with the number 12 on them are everywhere (12 is actually retired by the team in tribute to the fans), and an eventful pregame ritual involves the raising of a 12th Man flag at the stadium’s southern end by a person of prominence.

Before the game, though, you can get your throat ready for some screaming by checking out all the stadium has to offer. The main concourse on the stadium’s west side has plenty of cool displays — including a giant Super Bowl XLVIII display and a mural containing the helmet of every high school football team in the state of Washington.

Interested in a suite at Lumen Field? Buy suite tickets on SuiteHop.

Food and drink at Lumen Field

If you don’t mind walking around, take the time to explore the varied food options at Lumen Field, which do a good job of representing local cuisine. 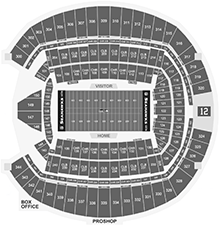