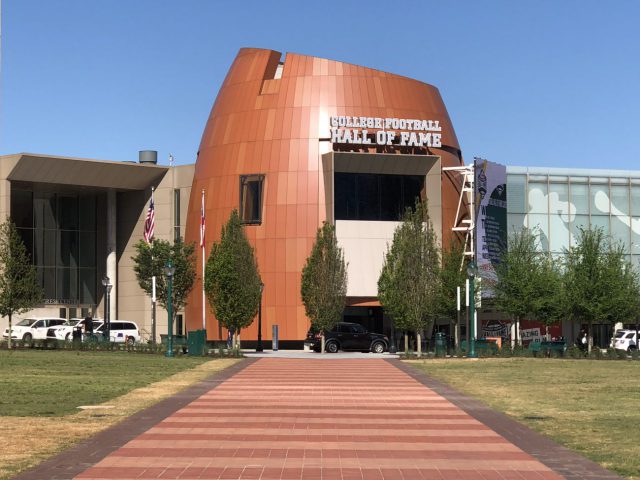 There’s no shortage of attractions to visit in downtown Atlanta, and yet the College Football Hall of Fame manages to stand out.

Its dramatic entrance — meant to resemble a football — is hard to miss even amid the other buildings on busy Marietta Street. The new facility opened in 2014, replacing the Hall of Fame’s previous spot in South Bend, Indiana, and offers up a modern facility with technologically advanced exhibits. Not to mention its location, in the heart of SEC/ACC country with the nearest Division I programs, Georgia State and Georgia Tech, just up the road.

Even if your day in Atlanta calls for visiting a number of its attractions, it’s not difficult to carve out a little bit of time to check out the shrine to college football. 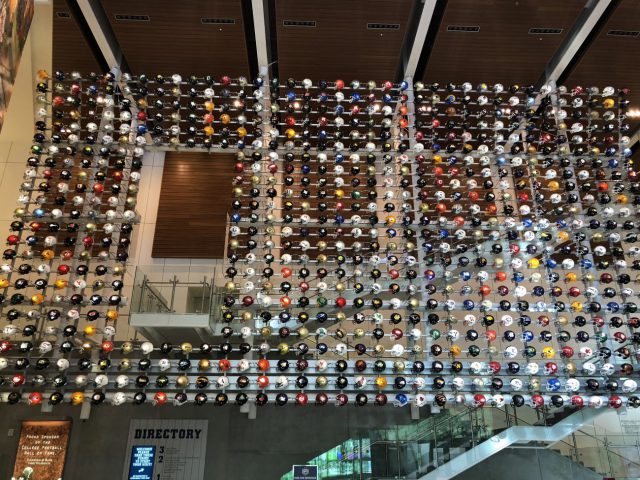 The approach: Getting to the College Football Hall of Fame

The College Football Hall of Fame is centrally located, in the heart of Atlanta’s tourism district. Centennial Olympic Park is just across the street, the Georgia World Congress Center (Atlanta’s mammoth convention center) is adjacent to it, and a laundry list of the city’s most popular destinations — CNN Center, the Georgia Aquarium, World of Coca-Cola, the National Center for Civil and Human Rights, Children’s Museum of Atlanta, the SkyView Atlanta ferris wheel — are within a short walking distance.

Two of the city’s major sports venues, Mercedes-Benz Stadium and State Farm Arena, are nearby as well. If you’re headed to a game, especially a college football game such as the SEC championship or the Peach Bowl, stopping off at the College Football Hall of Fame isn’t a bad way to spend your pregame time.

If you’re visiting Atlanta and staying in a downtown hotel, the Hall of Fame is an easy stroll from most of them. One, the Omni Atlanta at CNN Center, is right next door.

But for points farther out, using MARTA, Atlanta’s rail service, is a viable option. The station that serves the tourism district has the catch-all name of Dome/GWCC/Philips Arena/CNN Center. Riders can emerge from the station next to State Farm Arena (formerly Philips Arena), and from there it’s a two-block walk north around CNN Center to get to the Hall of Fame.

Check out our Atlanta sports travel guide for more tips on visiting the city. 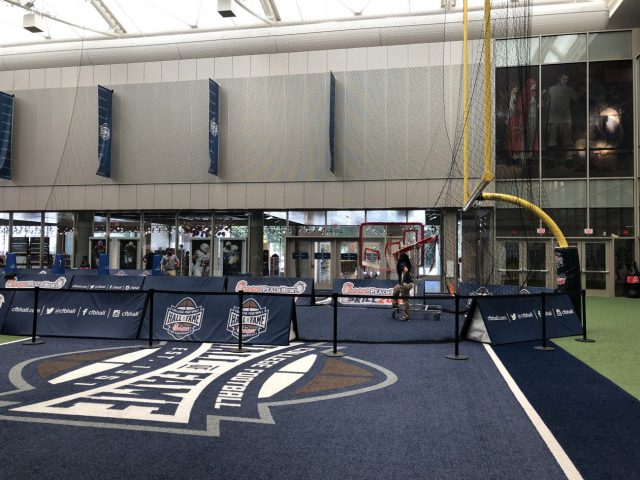 The ambiance: Things to see at the College Football Hall of Fame

You’ll get a sense of the interactivity as soon as you walk in, because when you pay for admission you’ll also be asked which school you represent. Then the person helping you will direct your attention to a huge display of helmets from programs across the country — the Helmet Wall, as it’s called, is three stories tall and has more than 700 helmets across all levels of the college game. The helmet from the school you chose will light up.

Visitors then make their way to the second and third floors, where most of the exhibits reside. The actual Hall of Fame that commemorates enshrined players, coaches and others is housed underneath the football-shaped atrium seen at the entrance. Rather than individual plaques as seen at most sports halls of fame, enshrinees can be looked up on numerous interactive screens. Considering there are more than 1,200 inductees, you can spend a lot of time in this area looking at details on your favorite figures.

There are other interesting exhibits to check out, including one that shows the various rivalry and bowl trophies around the game, displays devoted to tailgating, marching bands and athlete nutrition, and the “Game Day Theater” showing the college football experience in 4K HD fashion.

If you’re into pitting your skills against the best of college football — or, at least, your fellow museum patrons — that part is saved for last. Back on the first floor of the facility, the Indoor Playing Field allows visitors to test themselves in such skills as throwing an accurate pass, running through tackling dummies and kicking a field goal (the latter being much harder than it sounds). Even if you just wanted to know how artificial turf feels under your feet, this is a good place to experience that.

On your way out, you can also pass through the Hall of Fame’s gift shop, which contains some team apparel but mostly books and souvenirs devoted to the game in general. 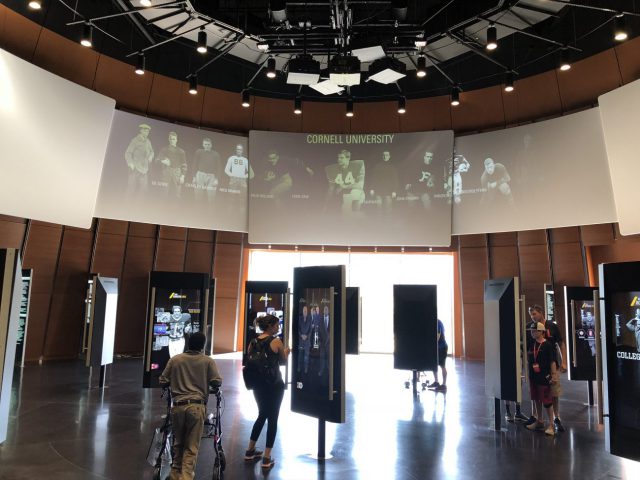 Share this post:
This entry was posted in College football, Halls of Fame, News. Bookmark the permalink.