Our guide to Angel Stadium of Anaheim includes information on events, tickets, parking, public transportation, nearby hotels and restaurants, seating and more. Read on to find out how to get the most out of your gameday experience.

You can take the “Anaheim” out of the name “Los Angeles Angels” (or, at least, relegate it to second-class status in what had to have been the most awkward official team name in major American sports), but you can’t take the Anaheim out of the team’s home ballpark. Not only is it officially called Angel Stadium of Anaheim and not only is it in Anaheim proper, it really exudes Anaheim.

What we mean by that is, it’s a suburban ballpark in suburbia, with freeways, strip malls and neighborhoods all around. (Also nearby, by the way, is Disneyland, which we’ll cover in “The build-up” below.)

The “Big A” is getting up there in years (it celebrated 50 years in 2016) and has gone through quite a bit in its history, including several renovations as it went from baseball-only to dual baseball/football and back to baseball again.

When you attend a game there, you’ll see that the park is showing its age in some areas, but the team has done its best to spruce things up over the years and it remains as good a place to watch major-league ball as any of its contemporaries.

Angel Stadium’s long-term future was up in the air for several years, as the Angels had looked around Orange County for potential new ballpark sites in recent years, and at times were at odds with the city of Anaheim over how to manage the Angel Stadium site going forward. However, the two sides came to an agreement December 2019 that sold the stadium to the team and ensured the Angels would stay in town until 2050.

Still up in the air is whether the team will choose to renovate Angel Stadium or build a new ballpark entirely. Until that’s decided, there’s still plenty of time to enjoy the current park for all it’s worth.

The vast majority of fans arrive at Angel Stadium via car — this is the L.A. area, after all — and Angel Stadium is located right alongside Route 57 (the city’s other pro sports venue, Honda Center, is on the other side of the freeway and visible beyond the outfield bleachers). A major freeway interchange, where Interstate 5 meets Routes 57 and 22 in what locals ruefully call the “Orange Crush,” is not far away.

For carpoolers, one way of avoiding the traffic involves using the HOV lanes on Interstate 5, aka the Santa Ana Freeway, and exiting at Gene Autry Drive. Head east on Gene Autry, which leads directly into the stadium parking lot.

There is a public transportation alternative to the game in the form of Metrolink, the L.A. area’s commuter train service, which runs a special “Angels Express” train from Los Angeles on weekdays. Adult fares are $7 round-trip and the Anaheim station is along nearby Douglas Avenue, with the train platform connecting with the ballpark parking lot. Amtrak also services this station; one-way fares between L.A. and Anaheim was $15.

The easiest access points for Angel Stadium are via the Katella Avenue or Orangewood Avenue exits on Route 57, or the State College Boulevard exit on I-5.

Angel Stadium is surrounded by a large parking lot that has several entrance gates via Orangewood, State College and Katella. As of the 2019 season, general parking in the Angel Stadium lot cost $10.

If you’re looking for bargain parking, though, the numerous small office parks surrounding the stadium offer parking in the $5 range or less. Try Gene Autry Drive or Orangewood east of the 57 to find some of these deals.

This particular section of Anaheim, known as the Platinum Triangle, is tourist-heavy because of nearby Disneyland and the Anaheim Convention Center, so hotels, restaurants and bars are plentiful. An influx of new apartments and condo buildings, some springing up right across the street from the ballpark, has contributed to the increase in entertainment and nightlife options.

You can survey your options along Harbor Boulevard between I-5 and Orangewood Avenue, as well as Katella between State College and Douglas, but know that you’re just as likely (perhaps more so on most days) to find yourself among families in town to visit Disneyland as baseball fans.

For a more sports fan-specific atmosphere, just look across Orangewood, where two major brewpubs — Golden Road and Karl Strauss Brewery — have set up shop, each with inviting dining areas and food and beer aplenty.

You can also try the number of establishments along Katella between Douglas and Main Street, east of the ballpark — because they’re closer to Angel Stadium and Honda Center than to Disneyland, they tend to be more frequented by sports fans. A few places worth checking out: J.T. Schmid’s, across from Honda Center; Lazy Dog; and The Tilted Kilt. The latter two are located in a shopping center known as the Stadium Promenade in the adjoining city of Orange.

Another viable pregame option: Stop by Disneyland. Yes, sports fans do carve out time to cavort with Mickey Mouse before games, and happily wear their fandom on their sleeves as they explore the Magic Kingdom. Be sure to plan ahead, though, because admission is pricey and it’s best to have enough time to make your investment worth it. 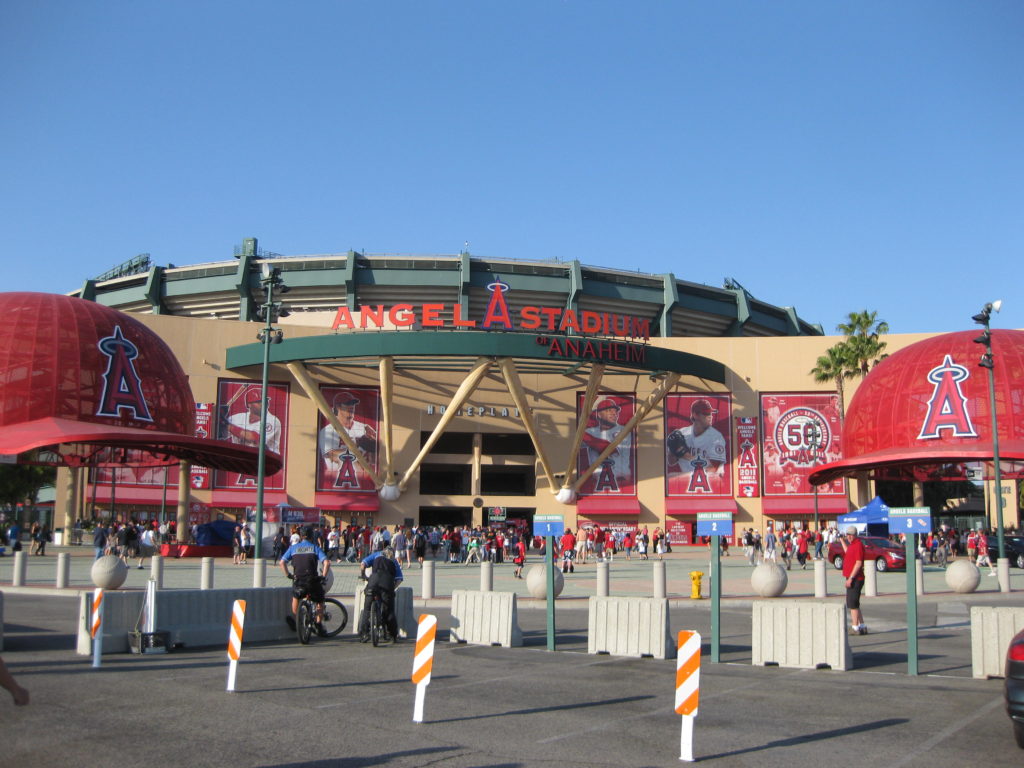 Watching a game at Angel Stadium

Angel Stadium of Anaheim is an old lady that’s gotten a bit of a facelift and made to look modern, but signs of its age are still readily apparent. For example, its corridors have been dressed up in a lot of areas, but in others they’re barren and worn (particularly when you get toward the outfield in less-traveled areas). Still, they’ve done a good job matching up to newer facilities in terms of accoutrements.

There’s probably no better example of this than along the field-level concourses, where areas that used to just be extra gates have been transformed into what are essentially outdoor food courts, complete with picnic tables shaded by palm trees.

The main concourse, though a bit cramped, features the team store and a display case containing mementos from the 2002 World Series title. You can also peek into the home-plate club area, where people get food from a carving station while regular folks gawk from the other side of the glass.

Because it was built as a baseball-only facility first, sight lines from seats from foul pole to foul pole are excellent, and the upper deck (known here as the View Level) is not as high as the top decks at most newer ballparks.

The outfield configuration, meanwhile, is a remnant of the days when the stadium also hosted the Los Angeles Rams of the NFL, a reason why the bleacher seats beyond the right-field fence are so high.

Angel Stadium boasts one remnant of the days when Disney owned the team — the rock formation in left-center field that shoots off geysers whenever an Angels player hits a home run.

For a more classic relic, look beyond the fence at the marquee that rests alongside Route 57 — it was the stadium’s original scoreboard and, because of its shape, is the primary reason the ballpark has the nickname “The Big A.” When the Angels win, the halo at the top of the Big A lights up.

Food and drink at Angel Stadium

Concessions at Angel Stadium include standard stadium fare such as hot dogs and pizza, but you can also find items like empanadas, rotisserie chicken and poke bowls.

Beer selections include brews from Ballast Point, Santa Monica Brew Works, Golden Road and Hangar 24. If you’re looking for a more communal bar experience at Angel Stadium, head to the right-field stands to find the Saint Archer Brewing Company tap room, that has patio and dining-room seating with views of the field. 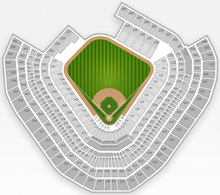