Our guide to Gainbridge Fieldhouse in Indianapolis includes information on events, tickets, parking, public transportation, nearby hotels and restaurants, seating and more. Read on to find out how to get the most out of your gameday experience.

You’ll be reminded of that quickly when visiting Gainbridge Fieldhouse, home of the Indiana Pacers.

The arena got a new name in 2021, changing over from Bankers Life Fieldhouse. Regardless of what it’s called, Gainbridge Fieldhouse is seen as one of the gold standards for NBA venues, and it has proven to be a top-notch venue for concerts and other big events. It’s worth a trip to Indianapolis to see why, as well as to see what the rest of the city has to offer.

Located downtown, Gainbridge Fieldhouse isn’t difficult to get to from most parts of the Indianapolis area, as it’s within walking distance of many of the downtown attractions as well as most of its major hotels.

For drivers into the central city, Gainbridge Fieldhouse is not far from the interchange between Interstates 65 and 70 — note that the two routes share the same road for several miles as they run a north-south path just east of downtown. Whichever downtown exit you use, you’ll have to travel several blocks into the downtown core to reach the arena.

Parking is plentiful around Gainbridge Fieldhouse, primarily at the Virginia Avenue Garage just to the northwest, which connects to the arena via a pedestrian bridge.

A number of smaller structures and lots stand on the surrounding blocks, particularly near the Indiana Convention Center a few blocks west on Maryland Avenue. Advance-purchase parking for Gainbridge Fieldhouse events is available via ParkWhiz.

Gainbridge Fieldhouse is part of a busy district of downtown Indianapolis (known locally as the Wholesale District) that includes Lucas Oil Stadium, home of the Colts, as well as many establishments and attractions that cater to the sports fan.

For pregame eating and/or drinking within walking distance of the arena, your best bet is Georgia Street, which extends west from the arena beginning at Pennsylvania Street and includes a number of establishments, both chain and independent. Many of these restaurants do brisk business on nights of Gainbridge Fieldhouse events and can get plenty busy, especially as the start time gets closer.

A little lesser known to out-of-towners is the stretch of Virginia Avenue about a mile southeast of Gainbridge Fieldhouse, which contains some of Indianapolis’ most acclaimed restaurants such as Milktooth, Bluebeard and Repeal. The area has become as much a destination for cocktail lovers as for foodies. 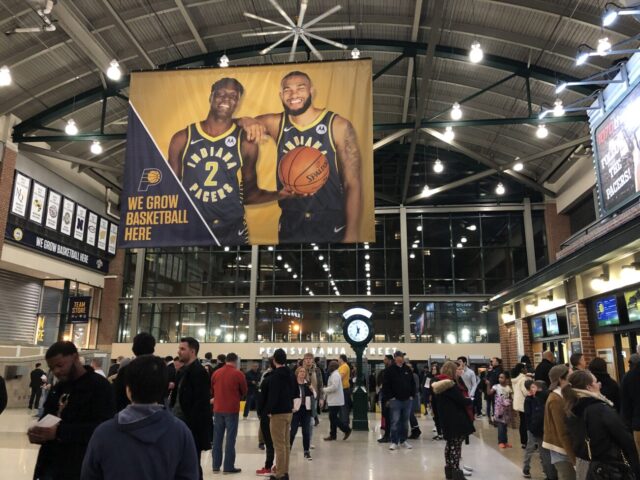 Watching a game at Gainbridge Fieldhouse

Gainbridge Fieldhouse provides an ideal setting for basketball-watching throughout its seating bowl. The building was designed primarily for basketball — meaning, it doesn’t have the larger event space that combo basketball-hockey arenas have — and named “Fieldhouse” in deference to the hoops gyms around Indiana, many of which have been given the same label.

Even the farthest seats from the court don’t feel irritatingly far, though it’s easy to get the impression that Gainbridge Fieldhouse has a cavernous feel — three levels of seating and an arched roof contribute to that perception, almost as if you’re watching the game in a domed stadium.

Those who do feel far-removed from the action in the upper reaches of Gainbridge Fieldhouse’s seating bowl have the benefit of the 50-foot-long, center-hung videoboard, installed before the 2012-13 season, to keep track of game action.

Food and drink at Gainbridge Fieldhouse

The concourse pavilions are also where you can find most of Gainbridge Fieldhouse’s concessions options. The aforementioned Midwest burger favorite Steak ‘n’ Shake operates stands, and the pork tenderloin sandwich is available at the “Homestead Favorites” stand. 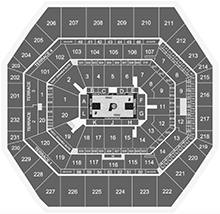