Our guide to Lucas Oil Stadium in Indianapolis includes information on events, tickets, parking, public transportation, nearby hotels and restaurants, seating and more. Read on to find out how to get the most out of your gameday experience.

Though basketball is undoubtedly king in Indiana, there’s plenty of room for football in the Indiana sports fan’s heart. And when it comes to football in the Hoosier State, fans have a palace to flock to in Lucas Oil Stadium on the edge of downtown Indianapolis, home of the Colts.

The stadium was designed with a loving nod to hoops in mind (to see how, just compare Lucas Oil Stadium to any building with “Field House” in its name). But it’s all football inside, and it is often cited as one of the NFL’s best stadiums.

For evidence of that, look no further than the list of big events that have already been staged at Lucas Oil Stadium in its short history: Super Bowl XLVI, the Big Ten championship game every year since 2011, and the annual and ever-growing NFL scouting combine.

Oh, and it actually isn’t all football, as fans who attended the 2010, 2015 and 2021 NCAA basketball Final Fours can attest. Since Indianapolis is the home of the NCAA’s headquarters, and Indiana has a rich tradition of supporting college athletics, you can expect more Final Fours and other major amateur events to come to Lucas Oil Stadium in the future.

Still, there’s no better way to get to know Lucas Oil Stadium than to visit for a Colts game, when seemingly the whole city turns out in blue to support the team. 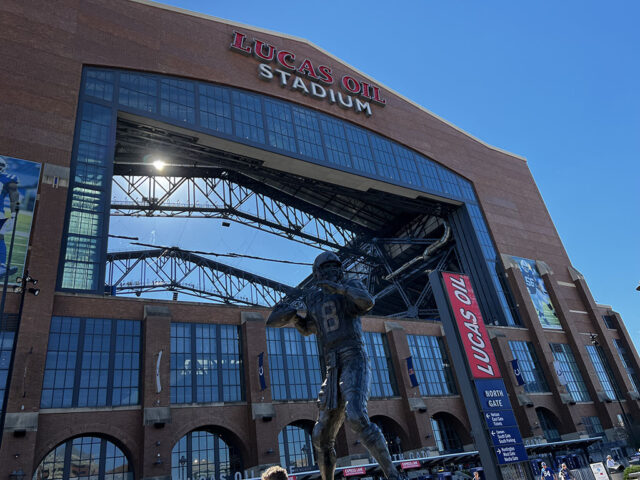 With a spot next to the huge Indiana Convention Center and close to where Interstates 65 and 70 converge as they cut through downtown, Lucas Oil Stadium is fairly easy to get to and unmistakable amid the Indianapolis skyline.

From I-70, the closest exit to the stadium is West Street, which runs north-south through downtown. However, note that this exit tends to get crowded in the hours before games. So consider an alternate exit such as Meridian Street, just to the east, which also will get drivers into the downtown area.

If you’re visiting Indy for an event, you have a wide selection of hotels in the downtown area to choose from, including no less than four directly across the street from Lucas Oil Stadium. Many other brand-name hotels are located in the blocks between the convention center and Gainbridge Fieldhouse, the home arena for the NBA’s Indiana Pacers.

So hoofing it to the game shouldn’t be difficult — unless, of course, it’s chilly outside, but in that case the city has you covered with its series of skywalks that allow pedestrians to walk around without having to brave the elements. Lucas Oil Stadium is connected to the skyway via an underground connector.

If the weather is nice, then downtown Indianapolis is plenty walkable, and you’ll see many football fans walking or using scooters to get to the stadium from a mile or more away. Along the way you’ll also run into fans tailgating in public parking spots or green spaces — wherever there’s room.

Once you’re in the vicinity of Lucas Oil Stadium, parking is ample, with surface lots south and north of the stadium and numerous structures scattered throughout the blocks directly to the north.

If you’re visiting for a single game, or you’re looking to save money, try using one of the many downtown parking lots and structures within a short walk (one mile radius or less) of Lucas Oil Stadium. If you want to pay $20 or less for parking, you’ll almost certainly have to go for this option. For a downtown Indianapolis parking map, click here.

For the really budget-conscious, there is a free option for Colts games at Lucas Oil Stadium: Parking on downtown Indianapolis streets are free on Sundays at any metered space. Come a few hours early to grab a spot close to the stadium, or park farther away and enjoy a stroll to the game.

There’s quite a bit to do around downtown Indianapolis, an area that has seen quite a bit of retail and hotel development in recent years thanks in part to the construction of Lucas Oil Stadium and the expansion of the Indiana Convention Center. And on Colts game days, of course, the area is teeming with football fans.

You’ll find most of what’s worthwhile in the blocks north of South Street between West Street and Delaware Street. Georgia Street between Capitol and Pennsylvania is a particularly popular street among sports fans. If you’re staying in a downtown hotel, it’s likely you’ll pass by a few of these establishments on the way to your Lucas Oil Stadium event.

There are quite a few familiar-name restaurants around (Buffalo Wild Wings, Hooters, Steak ‘n’ Shake and The Old Spaghetti Factory, just to name a few) but also a few local haunts worth checking out.

One definitely worth considering, at least if you have deep pockets and/or an appreciation of Indianapolis history, is St. Elmo’s Steak House on Illinois Street — arguably the most famous restaurant in the city. Or, try an Indiana specialty, the pork tenderloin sandwich, at one of two downtown establishments — Loughmiller’s Pub and Coaches Tavern. Click here for more info on nearby restaurants.

For their part, the Colts host a pregame party called “Touchdown Town” outside Lucas Oil Stadium’s north gate along South Street, complete with the usual bells and whistles — cheerleaders, live music, games, etc. Or, if you’d prefer to set up (or join) a tailgate, your best bet is to stake out the lot south of the stadium.

If sightseeing is your thing, the NCAA Hall of Champions, the Indiana Statehouse and the Soldiers and Sailors Monument are all within walking distance. 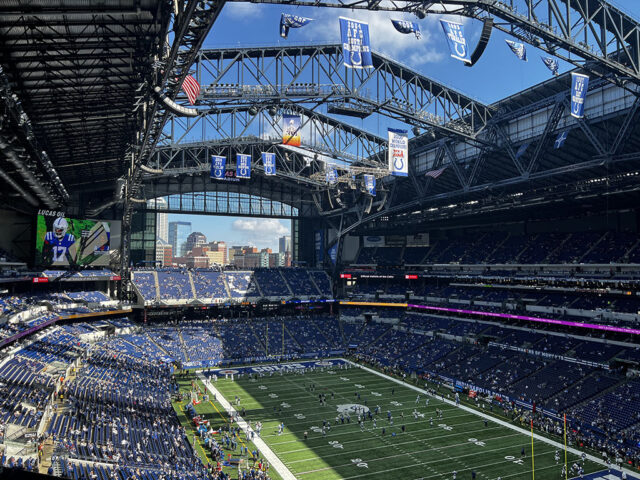 It’s unusual to see a building the size of Lucas Oil Stadium with a largely brick exterior, but that’s just one of the architectural features that sets the stadium apart.

As alluded to above, the “field house” feel is achieved thanks not only to the brick but also to the gabled roof, much like you’d see on a house. The roof is retractable, its panels sliding down from the center apex, and coupled with the large windows on both ends of the stadium (the larger ones on the north end are capable of sliding open), the venue can achieve an open-air feel on days when the weather is appropriate.

An added bonus is that when the window on the north side of Lucas Oil Stadium is open, you can get a nice, clear view of the downtown Indianapolis skyline depending on where your seating area is.

The roof helps reinforce the illusion of size, despite the fact that the Colts hang banners from the roof supports in the same way teams do at arenas (when the roof is open, they flap and sometimes twist in the wind).

But Lucas Oil Stadium’s seating bowl is comparable to most NFL venues, with three primary levels of seats and a luxury suite level mixed in. Two large videoboards are stationed in opposite corners of the stadium.

In addition, the seating configuration at Lucas Oil Stadium is such that an appreciable majority of seats are on the sidelines — after all, there can’t be much in the way of seating tiers blocking the windows. However, the seating level numbers do go up into the 600s, and with some of the uppermost sections containing more than 25 rows, the nosebleeds can feel high and somewhat removed from the action.

Befitting such a large venue, Lucas Oil Stadium’s concourses are large and generally easy to move around in, taking on a sort of convention-hall feel.

If you’re looking to get out of your seating area and find a more communal atmosphere at Lucas Oil Stadium, two areas stand out, both at the north end.

The main level serves as what is essentially an entrance atrium, decked out in an auto racing motif in tribute to both Indy’s racing heritage and the stadium’s title sponsor. There’s even enough room for a stage in the shape of the Colts’ horseshoe logo.

On the upper concourse, you’ll find what’s known as the Bud Light Party Zone. This is where members of the Colts’ famed drumline sets up, and while there’s far less space than the main concourse and thus gets crowded, it’s also where you’ll find some of the team’s most boisterous fans. You might have no better time watching a game than when the fans in the party zone celebrate a home-team TD.

Interested in a suite at Lucas Oil Stadium? Buy suite tickets on SuiteHop.

It pays to stroll along the concourses a bit to survey your options. Note that most of the specialty items are only available on the main and club levels. 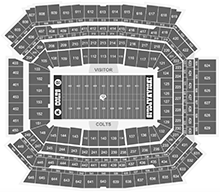