2022 MLB Daily Doubles: Where and when you can see two games in one day 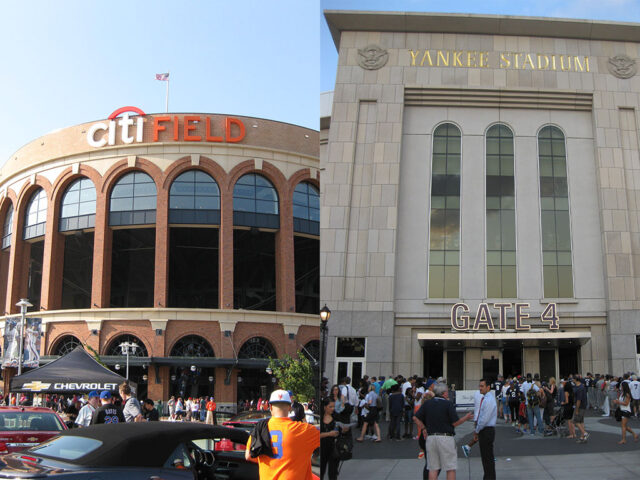 Most baseball fans long to go on ballpark road trips, seeing a number of games over a series of days or even weeks. But there’s another type of trip worth considering: the MLB daily double.

At least that’s what I call it — maybe the name will catch on sometime. The idea: To watch two games at two different ballparks … on the same day.

The thing about this type of trip, though, is that there are only a handful of places where you can realistically do it: New York City, Chicago, the Los Angeles area, the San Francisco Bay Area and the Baltimore/Washington area.

Of course, that’s because each of those markets have two MLB teams with ballparks within close proximity, so that you can reasonably get from one to the other and not miss any of the action at either place.

So at least you only have to travel to one city, unlike some of the other vacation ideas we’ve suggested here that typically involve hopping from city to city. But then there’s the matter of the schedule.

It’s rare that both teams in each of the markets mentioned above are playing at home on the same day, because Major League Baseball understandably doesn’t want them to have to compete with each other very often for casual fans. Even rarer is when two teams in the same market are not only home on a particular day, but playing games at different times of the day.

So frankly, you’re lucky to get more than a handful of opportunities each season to pull off this MLB Daily Double.

But when you find them, well, I hope you at least find yourself intrigued by the opportunity.

I know I do. I got my first opportunity to do this a few seasons ago, checking out games at Chicago’s Wrigley Field and Guaranteed Rate Field on the same day. It was a long day for sure, but it left me wanting to do it again sometime.

Before we continue, let me get the bad news out of the way here: There are precious few opportunities to do the MLB Daily Double in 2022. I’ve detailed them below — if a date and location works out for you, give it a try!

(Note: All times are local to the market; click on the link for each game to check out tickets via Ticketmaster.)

There’s just one opportunity in 2022 to do an MLB Daily Double in New York City, and it comes on a weekday — which might work better for fans in terms of ticket availability.

Note that while the NYC subway is by far the cheapest way to get from Yankee Stadium to Citi Field, or vice-versa, there’s no direct route between the two ballparks; you’ll have to travel into Manhattan and transfer lines — likely at Grand Central Terminal, where the 7 line that goes to Citi Field intersects with the 4 train to Yankee Stadium.

Plan on spending at least an hour traveling on the subway, so keep that in mind as you map out your plans for the day. 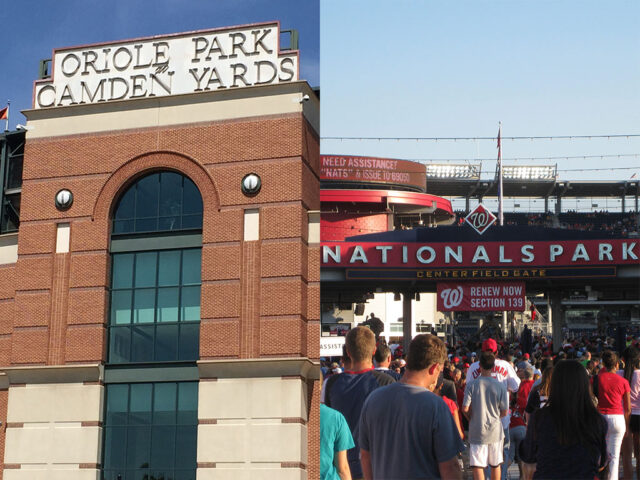 The single opportunity to do a Beltway Daily Double comes in June, as the Nats host the Phillies at Nationals Park, and the Orioles take on the Yankees at Camden Yards that evening. Note that the Nats game is the first game of a day-night doubleheader, so tickets for the two games are sold separately.

Though Washington and Baltimore have their own distinct identities, they’re only a half-hour drive apart and definitely prime territory for a trip like this.

While the two ballparks are, for the most part, connected in a straight shot via the Baltimore-Washington Parkway, you can also consider traveling via train. Use the Washington Metro subway to get from Nationals Park to Union Station, and then ride either Amtrak or MARC (Maryland’s commuter rail service) to Baltimore’s Penn Station. From there, take the MTA light rail to Camden station.

The number of transfers involved might make train travel less than desirable on such a short timeframe, but it might be doable if you pay close attention to the schedules. 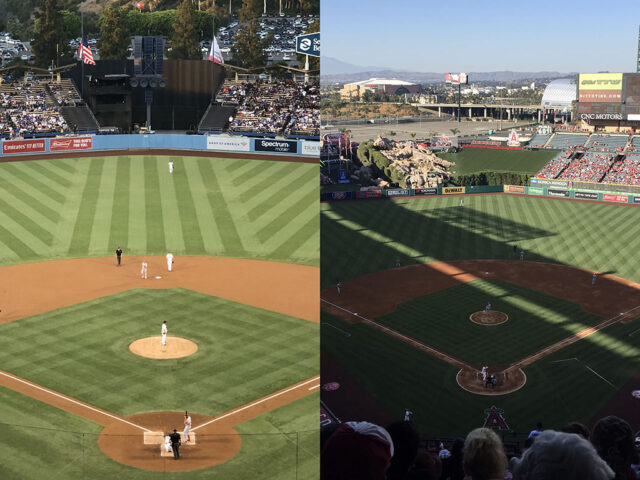 Just one chance to do a Daily Double with Southern California’s MLB parks, and it comes near the end of the season, with the Angels playing at Angel Stadium in the afternoon and the Dodgers in action at Dodger Stadium in the evening.

If you’re not familiar with the L.A. area, you might think the only way to get from ballpark to ballpark is to drive, but there is an alternative: The Metrolink commuter rail system, which generally operates regular daytime service between Anaheim and Los Angeles on weekdays.

Once you get to L.A.’s Union Station, you can use the L.A. Metro’s Dodger Stadium Express bus to beat the traffic and get to the ballpark without having to navigate its notoriously confusing parking lot. 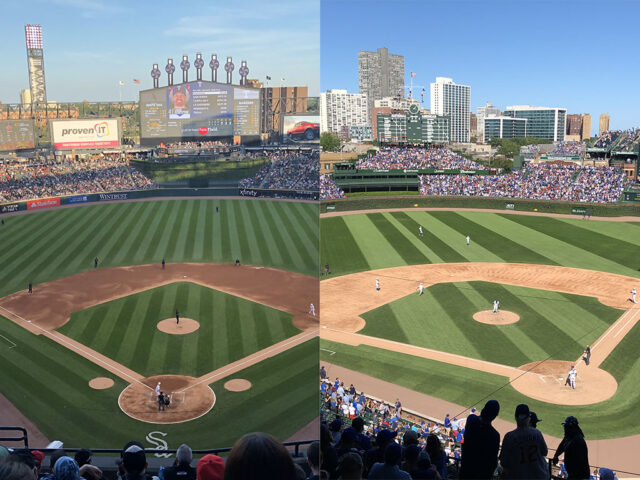 Talk about disappointing! There are no Daily Double opportunities in the Windy City on the 2022 calendar. It’s too bad, because seeing two games in one day in Chicago is quite the treat.

For future reference: Jumping between Wrigley Field and Guaranteed Rate Field is easy thanks to the Red Line of the “L” (aka the CTA subway). Get off at Addison for Wrigley and Sox/35th for Guaranteed Rate; the journey in either direction typically takes about 20-30 minutes depending on volume of passengers. 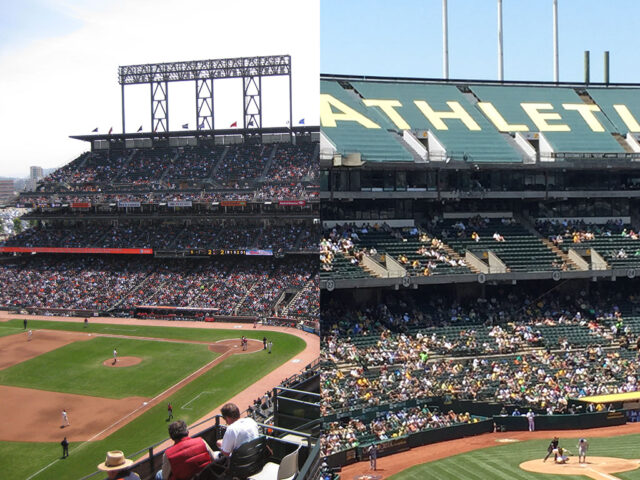 The Bay Area is just as stingy as Chicago with the 2022 MLB schedule, affording no opportunities to do a Daily Double. The Giants and A’s are at home concurrently during the final weekend of April, but unfortunately the game times are the same each day.

It’s too bad, because shuttling between the Giants’ Oracle Park and the A’s RingCentral Coliseum is quite easy. While the BART system is well-known and often used by visitors, note that it doesn’t run by Oracle Park. The closest BART stations in San Francisco (Embarcadero, Montgomery Street or Powell Street) are all more than a mile away.

If you want to take public transit to Oracle Park’s doorstep, use S.F.’s Muni rail system, which has a line running along the Embarcadero from the famous Ferry Building to the ballpark.

Love your website! While I’ve been to more than a dozen stadiums and arenas while on my travels, this summer I’ll be embarking on my first true sports road-trip – three cities, three ballparks, five days. Your site has been fantastic for planning my trip! I love the idea of the MLB Daily Double – but have you considered widening your definition of what would be possible. While the ballparks you mention are the obvious choices, what about other city-pairs that are close enough that they could be driveable…you know, if the scheduling were to align. Looks to me like… Read more »

Hi Noel — thank you for the kind words and I’m glad to hear the site is helping you plan your sports trip! I hear you on the additional Daily Double ideas. I’d probably add San Diego-Anaheim in there as well. I was reluctant to include those because with variables like traffic, length of game, etc., I think it would be tough for someone to try it and not miss a portion of one of the games. But you’re right, it’s certainly something an adventurous person can try (personally, I’d be willing to try it!). I’m going to try and… Read more »