Our guide to SoFi Stadium includes information on events, tickets, parking, public transportation, nearby hotels and restaurants, seating and more. Read on to find out how to get the most out of your gameday experience.

In just four short years, the NFL’s presence in Los Angeles went from nonexistent to vibrant with the arrival of the Rams and Chargers. And in 2020, the two teams got a new playground in SoFi Stadium, which promised to set a new standard in live football-watching.

Coming in with a price tag of $5 billion, making it the most expensive stadium ever built in the NFL, SoFi Stadium ushered in several technological enhancements to the live viewing experience — foremost among them being the oculus videoboard that will hang over the playing field.

The facility also has a transparent roof, which doesn’t seem to make much sense in sunny Southern California until you consider all of the other events the stadium has already booked.

SoFi Stadium got its first taste of the limelight with Super Bowl LVI in February 2022. More big events are coming, including the College Football Playoff national championship game in 2023 and events during the 2028 Summer Olympics. And in addition to NFL games, a new college football bowl, the Los Angeles Bowl, began play in December 2021.

The Rams and Chargers moved into their new stadium after spending several seasons at the Los Angeles Memorial Coliseum and Dignity Health Sports Park, respectively. For both, the arrival was long-awaited after decidedly different stadium experiences.

The NFL has also relocated its media operation, including its NFL Network studios, to the Hollywood Park campus from its longtime home in nearby Culver City. 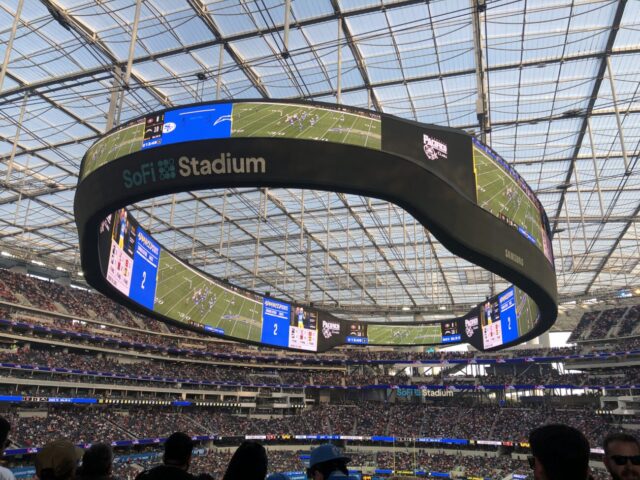 SoFi Stadium is located in the L.A. suburb of Inglewood, a few miles east of Los Angeles International Airport — close enough that it’s common to see planes fly directly overhead as they prepare to land.

For SoCal sports fans of a certain age, the location is familiar because of The Forum, the one-time home of the Lakers and Kings, and the Hollywood Park racetrack, which was demolished to make way for the stadium. But for visitors, Inglewood might not be all that familiar.

The stadium is accessible via two major Southland freeways, Interstates 405 (San Diego Freeway) and 105 (Century Freeway). From the 405, use either Manchester or Century Boulevards and head east; from the 105, exit at either Prairie or Crenshaw and head north.

Driving and parking might be the most convenient — if not expensive and time-consuming — way to get to SoFi Stadium. The Crenshaw line of the L.A. Metro rail system is a few years away from opening; it’ll have a stop in downtown Inglewood about two miles away, and the city of Inglewood is considering building an additional transit link directly to the stadium site. The infrastructure is likely at least a few years away.

Note that the shuttle drop-off and pick-up points are on the west side of the grounds; fans have to walk around the expansive NFL Network building that sits between it and the stadium.

The stadium is surrounded by an extensive set of parking lots, part of what will eventually become a residential and retail complex that will keep patrons coming to the site even when there are no events at SoFi Stadium.

Access to the parking lots surrounding SoFi Stadium will be available via Century Boulevard, Prairie Avenue and Pincay Drive. Lots are divided into color-coded zones; expect the most prime spaces to be available only to season-ticket members, and tailgating will not be allowed in the lots closest to the stadium perimeter.

Single-game parking passes are available via Ticketmaster for Rams and Chargers games, as well as most other SoFi Stadium events, with rates starting at $50 for all stadium-operated lots.

A handful of commuter hotels and motels are within walking distance of the stadium. But if you’re looking for a larger inventory and/or a better selection of brand-name hotels, the area around LAX is your best bet.

Century Boulevard leads directly into the airport and is lined with hotels for a two-mile stretch. A stay in one of these hotels would put fans within three miles of SoFi Stadium.

The retail complex planned for the SoFi Stadium site will be located on the corner of Prairie Avenue and Century Boulevard, and is currently under construction. Early reports indicate the complex will include a movie theater, a brewpub and a fitness center, and it appears it will be ready in 2023.

It seems likely that the center will contain numerous restaurants catering to football fans, similar to other entertainment centers being built near sports venues — L.A. Live near Crypto.com Arena being a perfect example.

The Hollywood Park Casino, a remaining vestige of the old racetrack, remains operational and continues to attract patrons to its new building along Century Boulevard.

Beyond the Hollywood Park site, several large big-box shopping centers located on Century Boulevard serve the Inglewood community, and you can find a few independent restaurants in the area, too. There figures to be an influx of traffic in these areas on days of SoFi Stadium events.

Keep in mind that a new arena for the NBA’s LA Clippers is slated to be built in Inglewood, across Century Boulevard from the stadium site. The facility will open in 2024. In addition, the Forum continues to operate as a major concert venue. 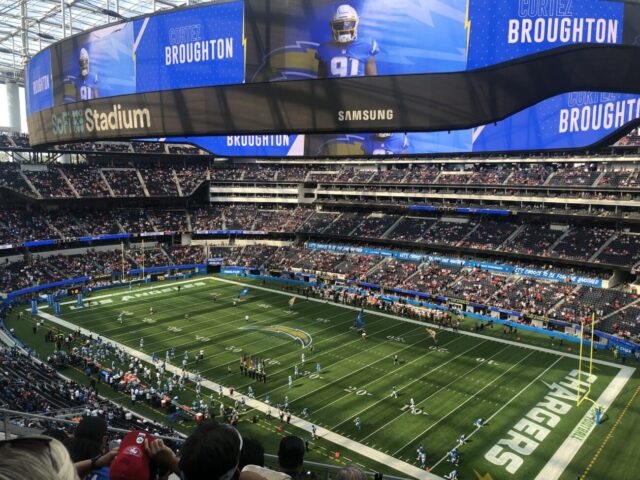 Watching a game at SoFi Stadium

The true experience of watching a game at SoFi Stadium was delayed a year, as the venue’s first season featured games held before an empty seating bowl. In 2021, though, sold-out Rams and Chargers games have given us a true glimpse of what the atmosphere can be, and it holds up with any of the great NFL stadium experiences.

Patrons flow into the stadium through large entry gates on both the north and south ends, but for dramatic effect you might want to check out the south side, facing Century Boulevard. A small park fronts the stadium, complete with lake and a large SoFi Stadium sign (see the image at the top of this guide).

Once you’re through the turnstiles, you’re in what has been branded American Airlines Plaza, covered by part of the roof overhang and meant to serve as a gathering spot for fans — both teams have live music and sponsor booths to set up shop here on game days. The stadium team store, called the Equipment Room, is also in this area.

Walk through the plaza and you’ll get your first glimpse at the field, the seating bowl and the awe-inspiring oculus board that hangs over it all. If you’ve visited some of the NFL’s newer, behemoth stadiums, you might feel like SoFi Stadium’s seating bowl doesn’t feel as overwhelming by comparison — that’s one effect of the fact the venue was built lower into the ground than normal because of its location beneath the LAX approach path.

You might also notice that the roof acts more like a canopy than an enclosure, and on breezy or windy days you’ll definitely feel a draft coming through the stadium. (The roof difference came into play during a Chargers-Raiders Monday night game in October 2021, when a thunderstorm delayed the kickoff and perplexed observers who hadn’t yet seen the venue.)

Meanwhile, the sun coming through SoFi Stadium’s translucent roof could present a problem on warmer days, depending on where you are in the seating bowl.

SoFi Stadium’s entry level, at the top of the 200 seating level, does not have a concourse that wraps around the stadium; that’s because the areas behind the parts of the seating bowl along the sidelines in the lowest levels are set off as premium spaces.

Most are meant only for VIPs and season seat holders, but some lounges are a little more accessible, such as the SoFi Member Lounge (basically a semi-exclusive bar/patio area) that’s open to customers of the financial service.

Interested in a suite at SoFi Stadium? Buy suite tickets on SuiteHop.

Food and drink at SoFi Stadium

The SoFi Stadium food scene leaves a little something to be desired when compared with comparable large venues.

The main concession stands, with names like Olvera Tacos and Sawtelle Food, make references to local food hotspots. But most stands have only a handful of items available, so selection is surprisingly limited. And don’t expect to pay less than $10 for a single item unless it is a basic stadium staple, such as a hot dog or cup of popcorn.

However, the beer scene is pretty robust, with Southern California-based Golden Road Brewery among the popular choices — particularly their well-liked Mango Cart.

Large bars are available on the concourses at nearly every level, including near the south and north entry gates. 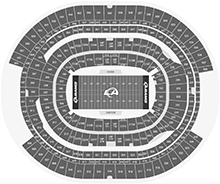