Our guide to Enterprise Center in St. Louis includes information on events, tickets, parking, public transportation, nearby hotels and restaurants, seating and more. Read on to find out how to get the most out of your gameday experience.

In St. Louis, MLB’s Cardinals tend to take a lion’s share of the city’s sporting attention, but that’s not to say the NHL’s Blues get short shrift.

Indeed, they love their hockey in St. Louis and fill up the team’s home arena, Enterprise Center, consistently. And the Blues have rewarded them with consistently competitive seasons throughout the years.

In 2019, though, the love between the team and city was on full display when the Blues went on an improbable run to the first Stanley Cup in franchise history. With the 1980s hit song “Gloria” blaring as an unlikely anthem, the team’s fans saw their loyalty pay off in spectacular fashion.

The Blues play their games at an arena that has served the fans well for 20 seasons now and is still going strong. Enterprise Center has been around long enough to get some history under its belt even before the Cup run — it has undergone four name changes, the most recent coming in 2018 (more on that later) — while remaining a modern and well-appointed place for the NHL fan to see some puck.

With the arena also having hosted the 2020 NHL All-Star Game, expect St. Louis to continue to be a hotbed for hockey in the foreseeable future. And Enterprise Center hosts plenty of other events — namely the Missouri Valley Conference men’s basketball tournament, otherwise known as “Arch Madness.”

Technically, the Enterprise Center is located downtown and right alongside Interstate 64. But it’s about a mile and a half from the Mississippi River and the Gateway Arch, and a little more than half a mile from Busch Stadium, the Cardinals’ ballpark.

So depending on how you feel about walking, and depending on where you’re coming from if you’re already downtown, you might find just walking to the game to be a tad far for your liking. Many of downtown St. Louis’ major hotels are close to the river and thus a mile or more away from Enterprise Center.

St. Louis’ MetroLink train system has you covered, though — the Civic Center stop is right at the arena’s doorstep (as is its Amtrak station and Greyhound depot). Both of MetroLink’s lines, Red and Blue, run by the arena, making it a solid park-and-ride option as well for fans coming to Enterprise Center from the suburbs in both Missouri and Illinois.

Enterprise Center has its own attached parking garage, called the Kiel Center Garage (named after the arena’s original name).

However, there are numerous other options in the area that can be used for Enterprise Center events, as there are several other prominent buildings in the area — including the Stifel Theatre, St. Louis City Hall and the Soldiers Memorial Military Museum.

The nearby Union Station is a good place for parking, and many smaller lots and structures stand along Clark and Spruce streets between the arena and Busch Stadium.

The Enterprise Center stands on the site of the Kiel Auditorium, once the city’s main sports arena. And as mentioned above, when it first opened, Enterprise Center was known as Kiel Center, so don’t be surprised to see old Kiel Center signage or the word “Kiel” in a lot of different places nearby.

The facility was more recently known as Scottrade Center before the Enterprise car rental company took over naming rights prior to the 2018-19 NHL season.

In addition to St. Louis City Hall, several other municipal buildings are close by as well, so the area is largely devoted to civic activities. That doesn’t mean there isn’t much to do around the arena, though.

You’ll find a few restaurants, bars and shops in and around Union Station, a few blocks to the west — despite its name and history as a train depot, it’s now mainly a shopping center. Even if you don’t care to hang out there, it’s worth walking through as a historic building that has undergone a huge renovation.

If you’re looking for more of a sports bar vibe, Maggie O’Brien’s (adjacent to Union Station) and Maurizio’s Pizza (two blocks east of the arena) tend to get a significant amount of pregame business from hockey fans. Or, check out one of the establishments closer to Busch Stadium (inside the Ballpark Village, for example) and then take the train to the game afterward.

Watching a game at Enterprise Center

Enter at the corner of Clark and 14th streets, which is considered the primary entrance and the one fans arriving via MetroLink will be closest to. You’ll be greeted by a huge glass facade and statues of Blues legends Brett Hull, Al MacInnis and Bernie Federko.

Inside Enterprise Center, the concourses are wide and easy to navigate, and the seating bowl offers good sight lines all around for hockey, as is to be expected of a modern arena.

But owing to the fact that the arena is now more than 20 years old, the Blues brought forth a series of renovations that included a new center-ice videoboard, new gathering spaces and seats, and a larger team store.

Part of the new experience at Enterprise Center includes a number of premium seating options for the Plaza Level (lower bowl) that come with club access and in-seat service. For example, the new Terrace seats at the top of sections 113-119 offers more leg room and selected food items included — part of a set of “all-inclusive” seats that can be found around the arena.

The Blues carried over a few traditions from their old home, the St. Louis Arena. In particular, look out for when the home team scores — fog will shoot out from the center-ice scoreboard, and the organ will begin playing “When The Saints Go Marching In,” a long-time tradition.

Interested in a suite at Enterprise Center? Buy suite tickets on SuiteHop.

Food and drink at Enterprise Center

Some of the greatest hits and popular establishments that make up St. Louis cuisine are represented well at Enterprise Center. Sugarfire Smokehouse offers St. Louis-style barbecue, while the local fast food chain Lion’s Choice serves its roast beef sandwich at the arena.

You won’t have to go far to survey your beer options once you arrive at Enterprise Center. If you enter through the 14th and Clark entrance, you’ll immediately be greeted by a large beer garden — one of the features installed in the recent renovations.

It’s not surprising that a venue in St. Louis would offer mostly Budweiser and other Anheuser-Busch products, but craft beer can still be found throughout Enterprise Center.

Look for selections from local outlets such as 4 Hands Brewing, Urban Chestnut and O’Fallon Brewery, the latter of which offers its Dad’s Oatmeal Cookie Stout.

Upcoming Events
All times local
Disney On Ice presents Into the Magic
Thursday, February 2, 2023
7:00 pm
Get tickets at Ticketmaster »

Disney On Ice presents Into the Magic
Friday, February 3, 2023
11:00 am
Get tickets at Ticketmaster »

Disney On Ice presents Into the Magic
Friday, February 3, 2023
7:00 pm
Get tickets at Ticketmaster »

Disney On Ice presents Into the Magic
Saturday, February 4, 2023
11:00 am
Get tickets at Ticketmaster »

Disney On Ice presents Into the Magic
Saturday, February 4, 2023
3:00 pm
Get tickets at Ticketmaster » 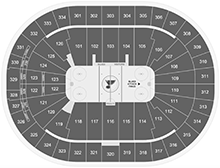