Our guide to Prudential Center in Newark, New Jersey, includes information on events, tickets, parking, public transportation, nearby hotels and restaurants, seating and more. Read on to find out how to get the most out of your gameday experience.

There’s no shortage of games and sports venues to see in the vast New York metropolitan area, and that’s especially true in the NHL.

In New York they have three hockey teams to choose from, and the rivalries between them are as intense as any you’ll see on the ice. Just watch the New Jersey Devils take on their crosstown foes at the Prudential Center for evidence of that.

While the Rangers and Islanders have their legions of fans, the Devils hold their own in the three-way battle — they have three Stanley Cups to their name, all won during a glorious eight-year stretch from 1995 to 2003, and they have the most recent championship of the three New York teams.

The Devils are also the only major pro team remaining to have “New Jersey” in its name after the Nets moved to Brooklyn in 2012.

There are plenty of reasons to check out the hockey season on the west side of the Hudson River, the Devils’ arena being one of the foremost among them. Also the home of Seton Hall’s men’s basketball team and major concerts and other events, Prudential Center has a lot to offer, as does the area it’s in. 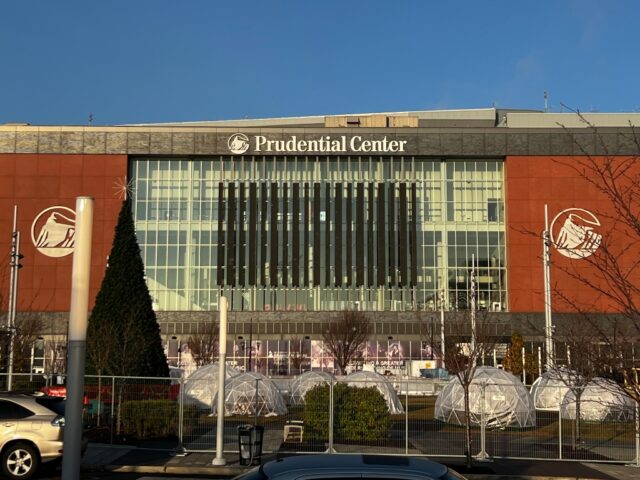 Prudential Center is one of the centerpieces of downtown Newark, an area that can be hardscrabble in spots but has been boosted somewhat by the arena’s presence. It is easily accessible via public transportation and is the primary method for patrons to reach Prudential Center for an event.

Newark Penn Station (not to be confused with New York’s Penn Station underneath Madison Square Garden) is a three-block walk away and served by several lines on New Jersey Transit, including the Northeast Corridor line that connects with Manhattan, as well as Newark light rail and PATH.

Note that if you’re trying to get to Newark from New York City, NJ Transit, PATH and Amtrak are your choices. The New York City subway system doesn’t cross over into New Jersey.

Drivers can get into downtown Newark via Interstates 78 and 280, both of which pass by on their way to connecting with the New Jersey Turnpike (I-95) a few miles to the east. You can find detailed directions to the arena here.

There are a large number of surface parking lots surrounding Prudential Center and the usual array of private lots and structures on nearby blocks, as is typical of a dense urban district. It’s worth paying attention to where you park and doing some planning in advance, as some lots can be several blocks away from the arena, with dimly lit areas in between.

You can purchased prepaid parking for Prudential Center events via ParkMobile, and despite its location in central Newark, there are bargains to be had — finding a rate under $10 is not out of the question depending on the day of the week and the event.

Despite the pockets of hardscrabble areas around downtown Newark, as alluded to earlier, there are places around to go and enjoy yourself on game nights.

Most prominently, the area around what’s known as Championship Plaza, on Mulberry Street across Edison Place from the arena, is highly popular with Devils fans.

More bars, pizzerias (very popular around these parts), delis (ditto) and fast-food joints are scattered around the surrounding blocks, and you’ll likely walk by something that catches your eye if you’re taking transit to the game or if you park your car more than a couple blocks away.

Try walking down Broad Street just west of the arena for more options. The area of Newark in which Prudential Center is located is dotted with government buildings, so some of the restaurants in the area cater to the workaday crowd, but sports-fan haunts can be found amid it all. 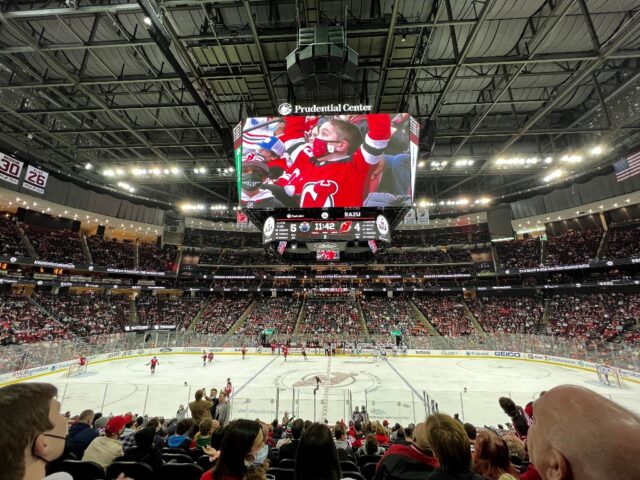 Watching a game at Prudential Center

From the outside, Prudential Center (named for the Prudential Insurance Company, headquarted in Newark) is a brick-and-glass building that fits in well with its surroundings.

The arena’s front entrance along Mulberry Street is accentuated by two towers at each corner that serve as gates, and fans can enter and go up to what is known as the “grand concourse.”

And that main level is certainly worth a spin around if you have the time. You can spot a few cool features along the way, such as a large mural depicting Devils greats such as Martin Brodeur and Scott Stevens and a display of jerseys from New Jersey high school hockey programs.

Just above the latter is the Goal Bar, a premium-only bar with seats overlooking the ice.

Prudential Center’s seating bowl is fairly standard except for the presence of an additional deck along the sidelines. This level, with sections numbered in the 200s, allows for more seating with a closer angle to the event floor — meaning fewer seats at Prudential Center that have that feeling of being far away from the action.

Garden State touches are apparent throughout Prudential Center’s seating bowl. You’ll hear quite a bit of native son Bruce Springsteen’s music over the loudspeakers. If the Devils win, ushers will high-five fans as they walk out.

Food and drink at Prudential Center

The arena has revamped its concessions options in recent years and now offers items like chicken biscuit sliders and Cuban sandwiches.

If you’re looking for a Jersey-specific food experience, check out the Bayonne Diner (diners are a state icon), or the Boardwalk that serves favorites from the Jersey Shore, such as corn dogs and funnel cake fries. Prudential Center also has a sit-down restaurant called The Rock Bar & Grill. 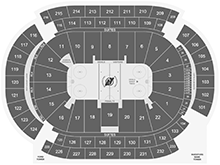