Venues Past: What watching a game at the Metrodome was like 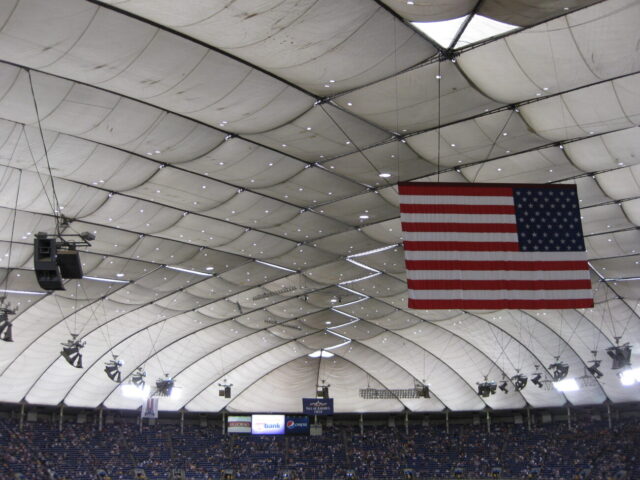 The first time I set foot inside the Metrodome, I have to admit, I was in awe.

This was in 2001, near the beginning of my quest to visit stadiums around the country. The first event I saw in the old building was not a Twins or Vikings game, but the NCAA Final Four, which Minneapolis hosted that year.

The Metrodome was not the first domed stadium I had ever visited. That honor goes to what is now known as Rogers Centre in Toronto, but that stadium has a retractable roof made of metal panels.

The same could be said of the two other domed buildings I checked off before my first trip to Minneapolis — Bank One Ballpark (now Chase Field) in Phoenix and Safeco Field (now T-Mobile Park) in Seattle.

The Metrodome, of course, was an old-school dome, with a puffy fabric roof that was common among its roofed contemporaries. And that’s where most of my fascination lay.

What was holding up that roof, anyway? (I wasn’t much into physics in high school.) Why did you have to enter the stadium through revolving doors? And why, in the case of the Metrodome, did everything seemed to be covered up with baggy fabric?

When people look back at the Metrodome, I’m sure these are the things they think about. And during my various visits over the years, they were what I thought about most. 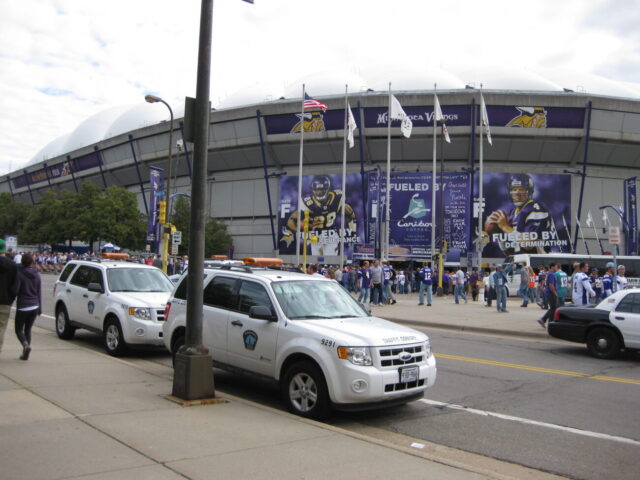 About that Metrodome roof

Perhaps the lasting image of the Metrodome in its final years was when its roof collapsed under the weight of a brutal snowstorm late in the 2010 NFL season. Cameras caught the collapse in progress, and the resulting damage forced the Vikings to play one of their two remaining home games that year at Detroit’s Ford Field.

My last visit to the building happened to come earlier that year, when I watched an early-season Vikings game. The Twins had played their last game there the year before and had moved on to the then-brand new Target Field, which I also had an opportunity to see that weekend.

There was nothing glamorous about the place — I can’t recall how far along plans were at the time to replace it and build a new stadium for the Vikings — but it was still plenty functional, and the fans around me seemed to think so. I’m guessing that changed for a lot of people when video of the roof collapse came out.

Even at its advanced age, I was still very much in awe of the roof, from the white fabric (I’m still not sure how outfielders tracked fly balls against it) to the familiar diamond pattern, and to the fact that large objects like speakers hung from it despite the fact that it was supported by air.

Of course, there were plenty of stadiums that had air-supported roofs back in the day, and many still stand. But my limited experience with them meant that entering one was still special to me.

It was still cool to me to witness a large-scale sporting event completely indoors. The sound and the feel of it was all different. And this was a Vikings game, where stadium ops always blew that large horn whenever the home team did something good, and I still remember that sound reverberating through the Metrodome. (Of course, they replicated that experience in their new home, U.S. Bank Stadium.)

I remember very clearly that in the 2010 game I attended, the Vikings had the ball near the goal line late in the fourth quarter, needing a touchdown to take the lead. But they were stopped on downs and wound up losing.

The moments leading up to the goal-line stand, the noise was deafening. But when they didn’t score, the air (metaphorically) was let out of the stadium so quickly. That is my lasting memory of the Metrodome. 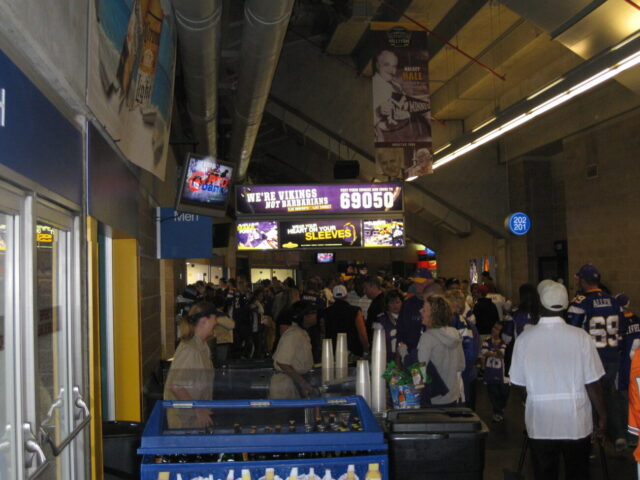 The Metrodome as a ballpark

It’s funny what happens to stadiums when they’re on the verge of being replaced. Fans who spent years calling it a dump shift their focus to the nostalgia of the place, choosing to instead remember the good times they had and the great moments they witnessed there.

In 2010, I saw the Minneapolis sports fan base in a time of transition. Twins fans appeared to have definitely moved on from the Hefty-bag Metrodome era, thanks to the beautiful new ballpark they now called home.

But the franchise’s two World Series championships were won at the Metrodome, and perhaps the most iconic baseball moment to occur there — Kirby Puckett’s walk-off homer in Game 6 of the 1991 Series — is memorialized with a statue of Puckett in front of Target Field.

I got a chance to see the Twins at the Metrodome in 2003 (this was before phone cameras, and I didn’t carry a camera with me on that visit so I have no photos). It was the only time I saw the baseball setup up close.

I admit I couldn’t help but stare at the tall right-field baggie wall and the folded-up bleachers behind it for much of the time. I’ve always been fascinated with how stadiums configure themselves to fit certain events, and this was certainly not an exception.

People forget that the Twins were rumored to be a target of contraction around that time, but after attending that series in 2003, I found that hard to believe. Even in this strange baseball atmosphere, Twins fans were as hearty as any around MLB.

If you had a chance to see a ballgame at the Metrodome, you wouldn’t consider it traditionalist by any means. But I’m pretty sure you would’ve had a good time nonetheless. 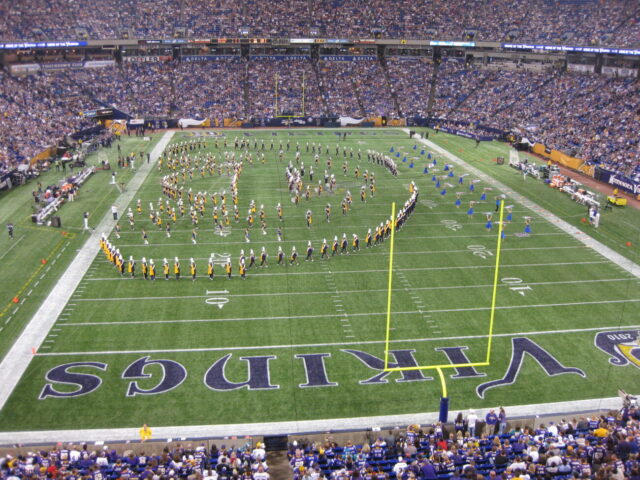 The Metrodome was demolished in 2014, and after two seasons playing at TCF Bank Stadium at the University of Minnesota, the Vikings moved into U.S. Bank Stadium for the 2016 season.

U.S. Bank Stadium is unique in its own way. For one thing, it has a roof, but instead of the inflatable fabric variety, it’s one of the first American venues with the clear ETFE roof that is quickly becoming fashionable in stadium construction around the world.

And believe it or not, they also play baseball there from time to time. After all, Minnesota’s harsh winters means that college and high school teams need somewhere to play that’s protected from the weather. But it goes without saying that a baseball diamond is an even more awkward fit there than it was in the old stadium.

The new stadium sits where the Metrodome used to, and as the years pass it’ll probably be hard for some fans to remember that it was even there. The creature comforts now offered by U.S. Bank Stadium make it easy to forget its predecessor.

But if you ever saw an event at the Metrodome, you’ll know it’s not an easy place to forget.