Our guide to Footprint Center in Phoenix includes information on events, tickets, parking, public transportation, nearby hotels and restaurants, seating and more. Read on to find out how to get the most out of your gameday experience.

Even as a fan, you’ll notice that the footprint of Footprint Center (pardon the wordplay) is smaller than the typical multipurpose facility, and a full lap around the concourse can be done in a jiffy. (It’s not so great if a hockey team decides later on to move in, as the poor Coyotes found out in the late 1990s before moving to what is now Gila River Arena.)

The arena has served the Phoenix Suns quite well over nearly 30 years of existence, during which it was known by its original name, America West Arena, as well as US Airways Center, Talking Stick Resort Arena and Phoenix Suns Arena. The current name was installed in the midst of the Suns’ 2021 run to the NBA Finals, ensuring it would stick in the minds of fans looking back on that euphoric time.

The building also helped breathe life into the downtown Phoenix neighborhood where it sits, aided by the construction of Chase Field for MLB’s Diamondbacks a few years later.

The experience should improve in the coming years, as Footprint Center has undergone a significant renovation that brought improvements to the seating bowl, concourses and plazas.

As the Suns’ recent playoff run showed, when the team is doing well, excitement over Phoenix’s original pro sports franchise can climb as high as ever.

And don’t forget the WNBA’s Phoenix Mercury, which draws fans to Footprint Center during the summer months and whose games have also become big events, especially with three titles in their history. 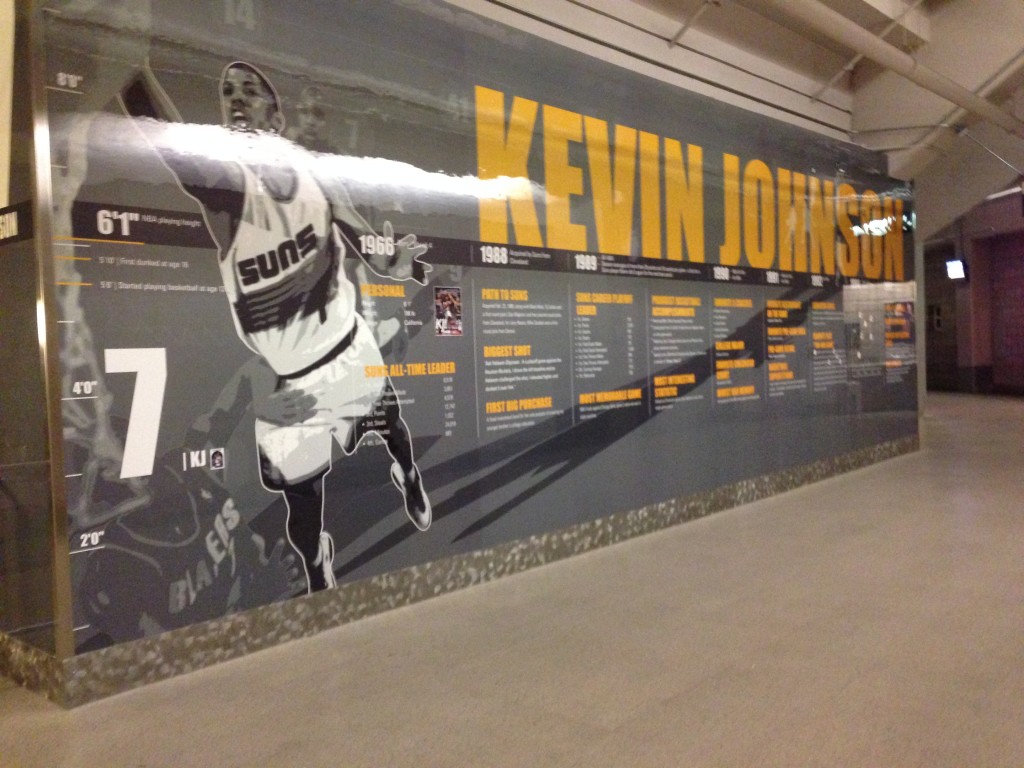 Footprint Center occupies a prime spot in downtown Phoenix, a block away from Chase Field in what is called the Legends Entertainment District, full of restaurants, nightlife and hotels.

Phoenix’s downtown isn’t difficult to find (just look for the tall buildings) nor difficult to navigate, with an impressive devotion to the rectangular street grid observed throughout the region.

Valley Metro is a viable option for getting to Footprint Center if you’re coming from an East Valley suburb such as Tempe or Mesa, or from the western part of Phoenix proper, and would rather not bother with driving and finding parking.

In fact, there’s a financial incentive for going the park-and-ride route at a Valley Metro station: Anyone who boards the light rail while holding a ticket for an event at Phoenix Suns Arena that day is entitled to ride for free, beginning six hours before the event start time.

Parking near Footprint Center isn’t difficult to find, and there are plenty of options. The arena has its own parking structure, attached to the building’s west side. There’s also a sizable structure across the street to the east, called the Jefferson Street Garage, occupying the block between the arena and Chase Field.

Drive along Jefferson and Washington streets and you’ll see plenty of private parking lots within walking distance of Footprint Center being advertised, with prices ranging from $8 to $15 depending on how close you are.

Most hotels in the downtown Phoenix core are within reasonable walking distance of Footprint Center. Despite the desert climate, temperatures are typically manageable during the months of basketball season, and you might find a stroll from your hotel to Footprint Center to be downright pleasant at sunset.

One restaurant of note for the first-time visitor to check out is Majerle’s Sports Grill, a block to the north on Washington and 2nd streets. Owned by beloved former Suns player Dan Majerle, it definitely caters to the sports fan and is a popular hangout. Majerle’s, of course, is far from the only options in the general vicinity, which is full of restaurants and bars.

One other well-known pregame eatery — Alice Cooper’stown, operated by the shock rocker who is a very visible member of the Phoenix community — closed in 2017, but fans attending a Footprint Center event will discover that Cooper hasn’t completely exited the city’s culinary scene. More on that in the food and drink section below. 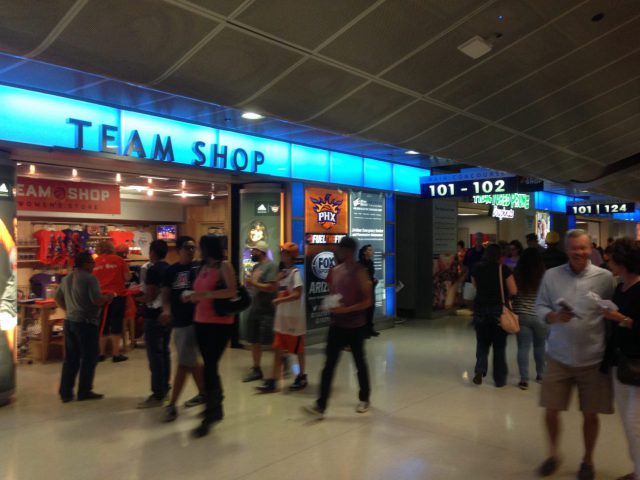 Watching a game at Footprint Center

Most people make their way in through the pavilion on the northwest side of the arena, on the inside of a large plaza that faces Jefferson Street. There’s also a big entrance on the east side, near an outdoor bar/patio and the set where the local Suns broadcasters do their pregame show. But once you’re inside, the arena looks like any other in terms of layout.

In the seating bowl, the intimacy of Footprint Center shines through. I had a seat right at center court, six rows up in the upper deck, and I felt like it was the perfect vantage point — you could see every play on the court unfold in front of you. But having sat behind the baskets in a couple previous visits a long time ago, I can profess it’s the same no matter where you are.

The spectator experience at Footprint Center events is enhanced by two large video screens, one behind each basket. The center-hung videoboard got a revamp with the latest round of renovations.

Interested in a suite at Footprint Center? Buy suite tickets on SuiteHop.

Food and drink at Footprint Center

It’s easy to see your food and drink options on the main concourse, and the upcoming renovations promise to improve this, as food court areas are set to be created, and a bar will be added to the main entrance pavilion.

A recent addition to the concessions lineup is Cooperstown — yes, run by Alice Cooper. His restaurant once boasted a two-foot-long hot dog named The Big Unit after former Diamondbacks pitcher Randy Johnson, and his arena stand evokes that with a foot-long Nightmare Dog that comes with a mountain of toppings.

Brand names that can be found around the arena include Carl’s Jr., Wetzel’s Pretzels and Benihana, with the latter serving teriyaki and poke bowls.

Upcoming Events
All times local
Why Don't We - The Good Times Only Tour
Friday, September 30, 2022
7:30 pm
Get tickets at Ticketmaster »

Disney On Ice presents Into the Magic
Thursday, October 6, 2022
7:00 pm
Get tickets at Ticketmaster »

Disney On Ice presents Into the Magic
Friday, October 7, 2022
7:00 pm
Get tickets at Ticketmaster »

Disney On Ice presents Into the Magic
Saturday, October 8, 2022
11:00 am
Get tickets at Ticketmaster » 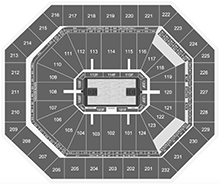