Our guide to SAP Center at San Jose includes information on events, tickets, parking, public transportation, nearby hotels and restaurants, seating and more. Read on to find out how to get the most out of your gameday experience.

Sometimes it’s easy to forget about SAP Center and San Jose in the sports and events landscape, despite the presence of the NHL’s Sharks.

Despite being the largest city in the Bay Area by population, San Jose sometimes gets short shrift in terms of perception compared to its neighbors, San Francisco and Oakland. A possible reason for this: San Francisco and Oakland are more prominently mentioned in the sports world, with both cities boasting multiple representatives among the major leagues.

San Jose has had some skin in the game for more than 25 years now, though, with the Sharks carrying the banner for the South Bay. And while there are undoubtedly fans of the Bay Area’s other teams in Silicon Valley, the Sharks hold a special place in their hearts because they actually play their games there.

The arena now known as SAP Center at San Jose has served the region’s hockey fans well for more than two decades, and in turn the team has rewarded the fans’ faith with a consistently competitive team, one that holds its own in a fierce rivalry with California’s other two hockey teams down south.

One thing that’s missing, though: a championship. The Sharks came tantalizingly close to the Stanley Cup in 2016, losing in the finals, but the playoff run only heightened the love for hockey around these parts. And the Shark Tank remains one of the more unique environments in which to watch hockey.

SAP Center is on the edge of downtown San Jose, separated from the district by the Guadalupe Freeway (Route 87) that cuts through on its way to the nearby Mineta San Jose International Airport.

The adjacent freeway makes it easy to reach the arena, though, as Route 87 connects with Interstates 280 and 880 and U.S. 101, all major freeways that run through San Jose.

The Bay Area’s well-known BART train system doesn’t reach San Jose, but the South Bay has its own rail transit system known as VTA. You can use it to get to SAP Center events from adjoining cities such as Sunnyvale, Mountain View and Milpitas; use the Green Line and get off at San Jose Diridon station, a block from the arena.

Once in the area, drivers will find a large parking lot surrounding the building and a few smaller ones nearby. Expect to pay $15 and up for parking in these lots.

Additional parking can be found in private lots and structures around downtown San Jose, and deals can be had ($5 and below) if you’re willing to walk a half-mile or more to SAP Center. Click here for more information on driving directions and parking.

Downtown San Jose has come into its own as a nightlife and entertainment district, and it certainly gets busy on days of SAP Center events with plenty of establishments to choose from.

To survey your options, try walking down Santa Clara Street east of the arena and the Guadalupe Freeway, where many high-end restaurants await. For cheaper options, try looking for spots along the light-rail route (near St. James Park) and close to the San Jose State University campus.

A few highly regarded options: Ike’s Love and Sandwiches, a wildly popular sub spot that originated in the Bay area; La Victoria Taqueria, a Mexican food institution near SJSU; Original Joe’s, an upscale Italian restaurant with a long history in San Jose; and Henry’s Hi-Life, a steak-and-rib joint a couple blocks from the arena.

Also, you can check out San Pedro Square, a shopping district that during hockey season is decked out in Sharks colors and hangs banners with the names and numbers of each player above the street. 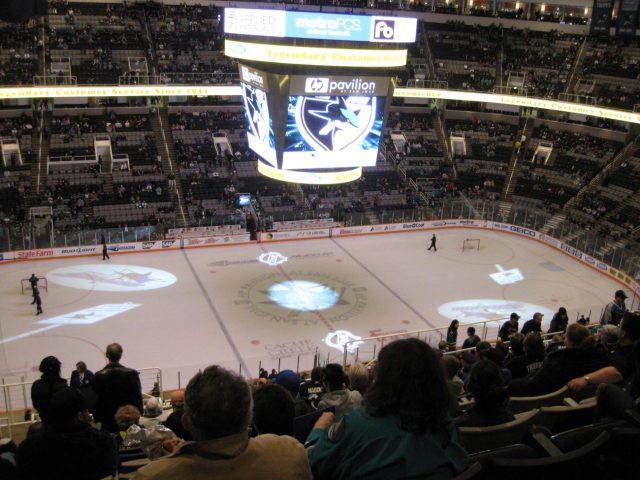 Watching a game at SAP Center

SAP Center remains well-maintained and modern despite nearing its three-decade mark, which for many arenas can mean the end of its usefulness.

Its glass atrium at the corner of Santa Clara and Autumn streets is the most popular point of entry for fans, who pass through into a well-lit lobby that leads to the main concourse via stairs and/or escalator.

And by “main concourse,” we mean “concourse,” because at SAP Center there’s only one. It’s one of those arenas where both the upper and lower seating bowls can be accessed via the same concourse, which can make for crowded passageways from time to time (ie. at game’s end).

But SAP Center’s design has an advantage in that the seating bowl doesn’t feel overly big, with good sight lines from even the uppermost rows — which aren’t very high at all in comparison to its contemporaries. (The press box seems to have been an afterthought here, though, as it’s perched in the rafters above the upper deck.)

That feeling prevails in other parts of the arena, too. You might feel as though SAP Center is tiny compared to its hulking contemporaries, and you wouldn’t be wrong.

As a result, there’s not a whole lot to explore around the building. It’s perfectly functional — go in, grab some food and beer, head to your seat and enjoy your event — but if you’re looking for an arena experience, SAP Center just doesn’t have much to offer in comparison to other arenas around the NHL.

Food and drink at SAP Center

But you can find a few gems on the menu, such as clam chowder in a bread bowl and Mission-style burritos, both Bay Area originals.

Be sure to look above you as you’re walking along, as there are food and drink stands above the concourse, accessible by stairs at two corners of the arena. 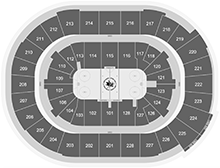