Our guide to Moda Center in Portland, Oregon, includes information on events, tickets, parking, public transportation, nearby hotels and restaurants, seating and more. Read on to find out how to get the most out of your gameday experience.

Moda Center serves as the primary events center for the city of Portland, Oregon, with plenty of seating, parking and amenities to accommodate a variety of events that pass through the region. It’s no surprise, though, that the arena’s primary tenant gets all the attention.

Portland has had a love affair with its NBA team for 50 years. In turn, the Trail Blazers have given the city plenty to remember, from the Bill Walton-led title team of 1977 to two Finals appearances in the early 1990s, a 21-season streak of playoff appearances and plenty of dramatics from the team’s current star, Damian Lillard.

On game nights at the team’s home, Moda Center, “Rip City” can be one of the most raucous environments in the league and a worthwhile visit for fans of home team and visiting team alike.

The Blazers’ home venue plays a big role in the franchise’s mystique. For many years, they played in the Memorial Coliseum, which had the league’s smallest capacity — meaning demand for tickets was always through the roof, fans were right on top of the action and the arena was consistently one of the NBA’s loudest.

Since 1995, the team has called the Moda Center (originally known as the Rose Garden) home, and while the move next door meant going from the NBA’s smallest arena to one of its largest seating-wise, the wild atmosphere remains.

For any NBA fan, a visit to Moda Center also means a visit to a jewel of a city in the Pacific Northwest, which is also part of the fun.

For more on visiting Portland, check out our Portland sports travel guide.

Moda Center sits just off the east bank of the Willamette River, which carves a north-south path through the heart of the city. Despite the river’s presence, it’s close to and easily accessible from downtown, the increasingly popular Pearl District and other neighborhoods on the west side.

Especially if you’re staying downtown, it’s worth it to take advantage of Portland’s public transit options to avoid having to rent a car and/or park at Moda Center.

The MAX light-rail system runs right by the arena — the Blue, Red, Green and Yellow lines all have stations at the Rose Quarter, the collective name for the area in which Moda Center and the Memorial Coliseum (which remains in operation) are located. The Rose Quarter Transit Center, which services three of the four aforementioned lines, is located just across the street from Moda Center.

Another transit option is the Portland Streetcar, consisting of three lines. Two of them, the A and B loops, run between downtown and the east side. Get off at NE Broadway and Ross and walk a block south to reach the Moda Center. (Note: a $5 all-day fare purchased at either a MAX or Streetcar kiosk is good for travel on both systems.)

If these options don’t work for you and you’d rather drive, the Rose Quarter is easily accessible via Interstates 5 or 94, which intersect about half a mile to the south. From I-5, exit at Broadway/Weidler Street and follow signs to the Moda Center, where you’ll find several parking structures and lots on the Rose Quarter campus, including one attached to the arena.

This being the environmentally conscious Pacific Northwest, biking to the game is a viable option. Moda Center operates a bike parking area near the south entrance, and nearly all of the nearby bridges have designated bike paths.

Though it’s not the downtown core, there’s still plenty going on around the Rose Quarter. A major shopping mall, the Lloyd Center, is located about a mile to the east, and numerous restaurants, bars and hotels are scattered throughout the blocks in between, many with Blazers paraphernalia on the walls and in the windows.

The area around the hotel, and downtown nearby, is a great starting point to experience all the weird and wonderful things to do in Portland, from tiny parks to haunted hotels.

Thanks in large part to its vibrant food cart scene, Portland has developed a well-earned reputation as a terrific dining city, and some of it can be easily sampled prior to events at Moda Center.

Some of the local favorites that have shops nearby are Burgerville, Sizzle Pie and Pine State Biscuits. A short transit ride away are the numerous food cart pods and brewpubs of downtown and the Pearl District.

Closer to the arena, there’s a brewpub called Dr. Jack’s (named after legendary former Blazers coach Dr. Jack Ramsay) that operates on game days. It’s in the plaza near the arena’s southwest entrance. 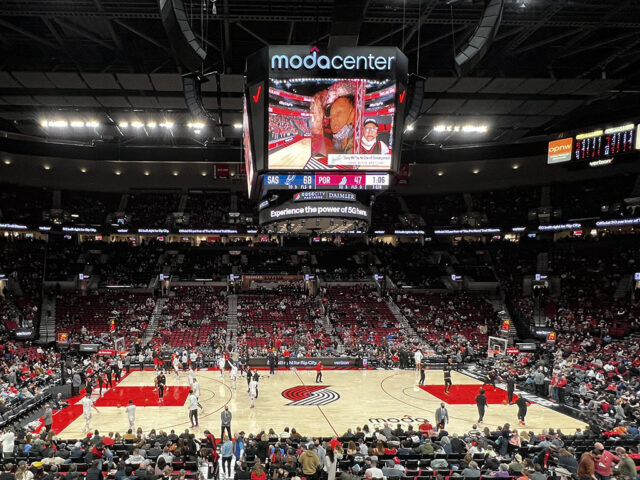 Watching a game at Moda Center

Moda Center is surrounded by a plaza that is plenty active on days of events. Don’t go inside without first checking out the “Rip City” sign, located near the south entrance next to a fountain between the arena and Dr. Jack’s. It’s missing the second “I” so that fans can stand on the sign and represent the “I” in photo ops.

After that, go on inside and check out the scene. Moda Center is a big arena with plenty of room to move around in most spots, including the seating bowl. The main concourse is plenty wide enough to handle foot traffic on most nights, and there are lighted displays honoring Blazers stars past and present near the tunnels to many sections.

Moda Center’s seating bowl consists of three levels like many major arenas, but the lower bowl feels larger than normal. Indeed, with a capacity of 19,000-plus for basketball, the building can feel cavernous overall, and save for the occasional seasons when the Blazers are winning and getting the region excited, don’t be surprised to see pockets of empty seats at any given game.

Upper-deck seats can feel a little removed from the action — after all, the atmosphere here can’t match the intimacy of the old Memorial Coliseum — but the arena has info boards — a LOT of info boards — along the perimeter of the ceiling area. Each side features a “Hustleboard” that keeps track of each team’s rebounds, steals and blocks.

There’s also the main video board that hangs over the court. While plenty serviceable, it’s not very large by the ever-growing standards being set by modern arenas.

Food and drink at Moda Center

The real star of the show at Moda Center is the concessions, which take a cue from Portland’s food scene as a whole.

Some of the local purveyors that operate stands within include Sizzle Pie (mentioned above), Killer Burger, Kama’aina (Hawaiian food) and Salt and Straw (ice cream). All are worth trying in their own right.

If you’d like a brew with your grub, you can stay regional there, too — beers from Pyramid Breweries, Portland Brewing and Laurelwood Brewing Company are all available. 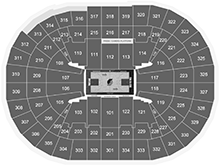