Our guide to Pepsi Center in Denver includes information on events, tickets, parking, public transportation, nearby hotels and restaurants, seating and more. Read on to find out how to get the most out of your gameday experience.

Built near the beginning of the ’90s-era surge in new stadium construction, Denver’s Pepsi Center — home of the Colorado Avalanche and Denver Nuggets — continues to stand the test of time.

The building has gone through improvements over the years to keep up with modern comforts but remains a functional but not flashy to watch a basketball or hockey game, from its amenities to its location on the edge of downtown Denver.

Pepsi Center has seen the Stanley Cup raised within its walls (by the Avalanche in 2001) and has also played host to the NHL and NBA All-Star Games, NCAA basketball tournament games (including the Women’s Final Four), the NCAA Frozen Four and more.

While the Avs and Nuggets look to ascend to the heights of their respective leagues, their home arena remains a great place to watch a game, whether you’re a fan of the home team or just visiting Denver.

Getting to Pepsi Center

Pepsi Center is located in a central part of the Denver region, just outside the popular district known locally as LoDo (shorthand for “Lower Downtown”) and near a lot of the city’s attractions. The home of the NFL’s Broncos, Empower Field at Mile High, is nearby, and Pepsi Center and Empower Field share several parking lots located between them.

A major thoroughfare, Speer Boulevard, runs by the arena, and the majority of fans driving in for games will access it from the nearby Interstate 25 to get there. If you’re heading east on Speer, turn right onto Chopper Circle to reach Pepsi Center’s parking lots, which are currently sponsored by Toyota and thus are all named after Toyota vehicles.

Expect to pay $25 for parking at Pepsi Center for Avalanche and Nuggets games, though rates are discounted by $5 for anyone paying with a credit or debit card. Parking rates are sometimes cheaper for other Pepsi Center events such as concerts.

Denver’s RTD light-rail service has a station at the arena’s doorstep, known as Pepsi Center/Elitch Gardens. Three lines (C, E and W) serve the station and it’s possible to take light rail the short distance from downtown’s Union Station, so it’s a viable option if you want to get out of the cold or simply don’t want to walk.

Things to do around Pepsi Center

Watching a game at Pepsi Center

Some of the “newer” arenas around the NBA and NHL can look like behemoths, especially from the outside, but Pepsi Center does not fit this description. It’s plenty big, but just not huge, which is perfectly fine.

From there, Pepsi Center’s layout is fairly standard-issue, with three seating levels numbered 100, 200 and 300 — the middle is a club level, and the arena’s suites can be found in between as well.

Pepsi Center’s upper deck seating rows don’t feel that high up — at least for the Avs game we attended, we were near the top but never felt far removed from the action. None of the 300-level seating sections at Pepsi Center go higher than 16 rows up. If you’re up high and have trouble seeing, you can always train your eye on the HD videoboard that hangs over the playing area, installed in 2013.

Food and drink at Pepsi Center 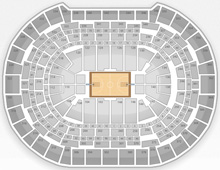