If you’re looking to see Major League Baseball’s spring training, you’ll have to head to one of two places. Both Florida, where the Grapefruit League resides, and Arizona, home of the Cactus League, are warm, sunny and full of interesting spring training stadiums to visit.

Indeed, seeing the spring training ballparks in Florida and Arizona can be just as fun and rewarding as taking a regular-season ballpark tour, and whichever state you choose, you’ll have less ground to cover as well.

In 2023, spring training will get off to an early start, with games beginning on Feb. 24 in Arizona and Feb. 25 in Florida. So whether you’re looking to get away from cold weather or just want to enjoy a leisurely few days of watching baseball, the opportunity to do so is fast approaching.

Read on for more about making the most of a visit to Florida for spring training in the Grapefruit League. For our perspective on the Cactus League, click here.

Stadiums of the Grapefruit League

The Grapefruit League is distinctly more spread-out than its Arizona counterpart in that it’s spread out the width of Florida and contains a mix of sites in or close to major metropolitan areas (Tampa Bay, South Florida) and small-town sites. It has also evolved in recent years with several franchise shifts.

In 2017, the Astros and Nationals moved into a dual complex in West Palm Beach, increasing the number of Grapefruit League teams that share sites. And in 2020, the Braves moved to the town of North Port, along the Gulf Coast south of Sarasota.

Here’s a list of stadiums for the 15 Grapefruit League teams, or you can pinpoint them in the map above. (Note: Click on each team name to see its 2022 spring training schedule and buy tickets via Ticketmaster.)

• The Ballpark of the Palm Beaches: Home of the Astros and Nationals. Located at 5444 Haverhill Road, West Palm Beach. 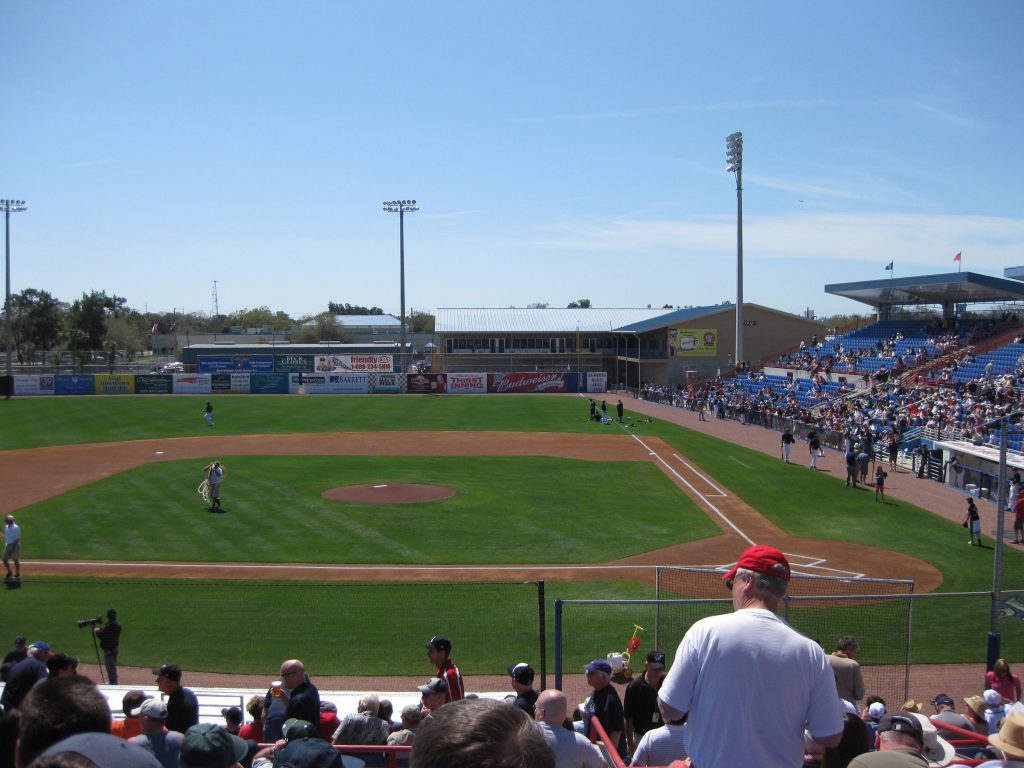 Getting around Florida during spring training

Traversing an entire state can be a bit of a challenge, so more so than in the Cactus League, a bit of planning is needed to get around the Grapefruit League.

You’ll need a sturdy car, of course, and a bit of patience, as Florida’s highways can get a little crowded in March with the influx of snowbirds, spring breakers and other vacationers joining the many baseball fans out there.

Here are a few tips for getting from venue to venue.

• The venues tend to be concentrated along Florida’s two coasts, the Gulf Coast on the west and the Atlantic coast on the east. Unless you want to be really ambitious or you have plenty of time on your hands, consider concentrating your time and energy on one side to reduce your travel time.

For reference, it would take more than two hours (a distance of about 135 miles) to get from the northernmost ballpark on the Gulf Coast (Dunedin) to the southernmost (Fort Myers); on the Atlantic coast, it’s about 50 miles between Port St. Lucie and West Palm Beach, though there are only five teams total training there.

• If you do want to cross from one side of the state to the other, plan on at least a 2½-hour drive — at least, that’s how long it would take to get from Fort Myers to West Palm Beach via “Alligator Alley,” aka Interstate 75 through the Everglades.

You can also take I-4 between Tampa and Orlando (a good route if you want to catch the Tigers in Lakeland) and then Florida’s Turnpike south toward the Atlantic coast venues.

• If you’re looking to stay in one place for the duration of your Grapefruit League vacation and still be in close proximity to many of the venues, the Tampa area is your best bet. Three teams (the Yankees, Phillies and Blue Jays) train in the area, and three more (the Pirates, Orioles and Tigers) have their bases within an hour’s drive.

Worth seeing in the Grapefruit League

• Many spring training stadiums in the Grapefruit League go out of their way to offer some of the same creature comforts that fans expect from their teams’ regular-season homes.

That’s most evident in the food offerings. For example, you can find cheesesteaks at the Phillies’ BayCare Ballpark, Fenway Franks at JetBlue Park, coney dogs at Joker Marchant Stadium and more.

• The creature-comfort thing extends to ballpark design as well — particularly at JetBlue Park, which comes complete with a Green Monster (and yes, has seating at the top of the wall) and is part of a complex known as “Fenway South.”

The Yankees’ Steinbrenner Field has the familiar frieze that distinguishes Yankee Stadium, and the Phillies’ BayCare Ballpark was built with the same dimensions as Citizens Bank Park (the two parks opened the same year, 2004). 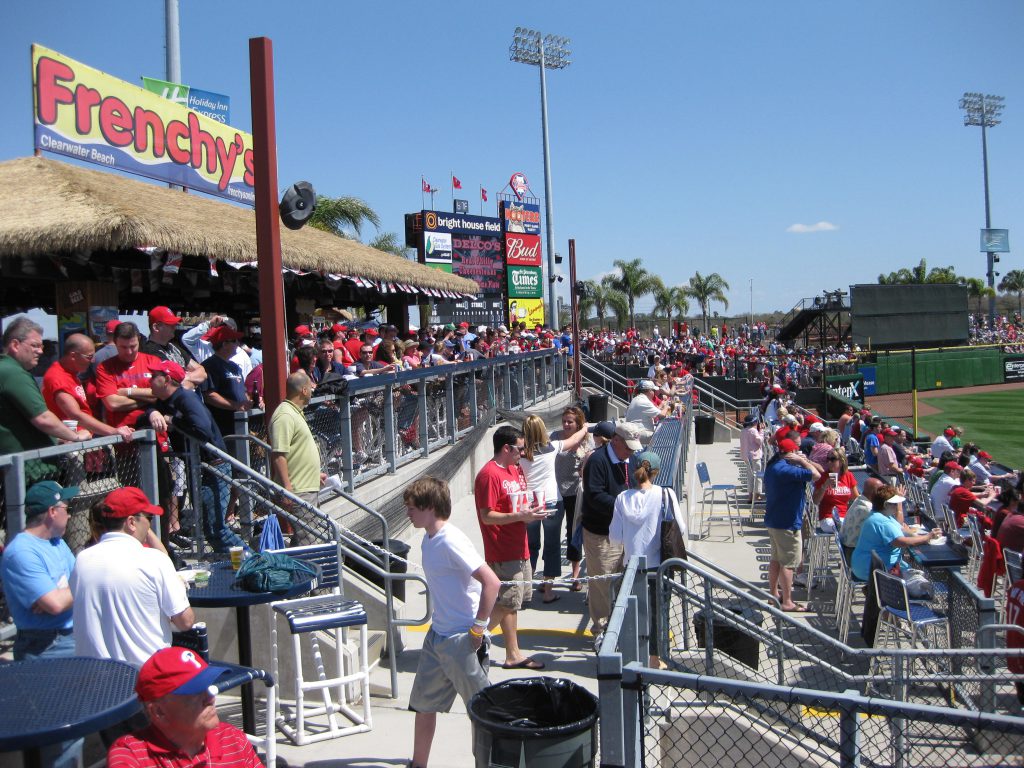 Things to do in Florida during spring training

If you do wind up in the Tampa area, there’s plenty to do, from hanging out along the Gulf Coast beaches to visiting Ybor City and Busch Gardens. For a more thorough rundown, check out our Tampa Bay sports travel guide.

For those whose travels will take them to Port St. Lucie, Jupiter or West Palm Beach, consider going a little farther south down I-95 to check out the Miami area. See our Miami sports travel guide for all the happenings there.

If you’re planning to see the Tigers in Lakeland, or simply intend to pass through, check out all the amusement parks the Orlando area has to offer. There’s Walt Disney World, of course, but also Universal Orlando Resort, SeaWorld, Legoland Florida and more. You can find a full list of Orlando-area amusement parks here.

You’ll have plenty of opportunities to see other sports during your Grapefruit League sojourn. Consider checking out the NHL’s Lightning at Amalie Arena in Tampa, the NBA’s Magic at Amway Center in Orlando, the NHL’s Panthers at BB&T Center in Sunrise (west of Fort Lauderdale), or the NBA’s Heat at FTX Arena in Miami.

The NCAA men’s basketball tournament is also coming to Orlando, with first- and second-round games to be held March 16 and 18 at Amway Center.