Our guide to LoanDepot Park in Miami includes information on events, tickets, parking, public transportation, nearby hotels and restaurants, seating and more. Read on to find out how to get the most out of your gameday experience.

Of Major League Baseball’s current collection of 30 ballparks, LoanDepot Park might be its most polarizing. Not many baseball traditionalists like the home of the Miami Marlins — not with its retractable roof and garish architecture, which flies in the face of the brick-and-steel formula most newly built ballparks employ.

Despite all that, there are things to like about LoanDepot Park (formerly known as Marlins Park until a 2021 name change), and plenty of reasons to see an event there. It’s a nice facility, especially on the inside, with plenty of features to keep you entertained as you walk around and as you watch the game.

LoanDepot Park does get used for other major events, such as the 2017 MLB All-Star Game and matches in the World Baseball Classic, not to mention international soccer matches and, for a period of time, a college football bowl game. 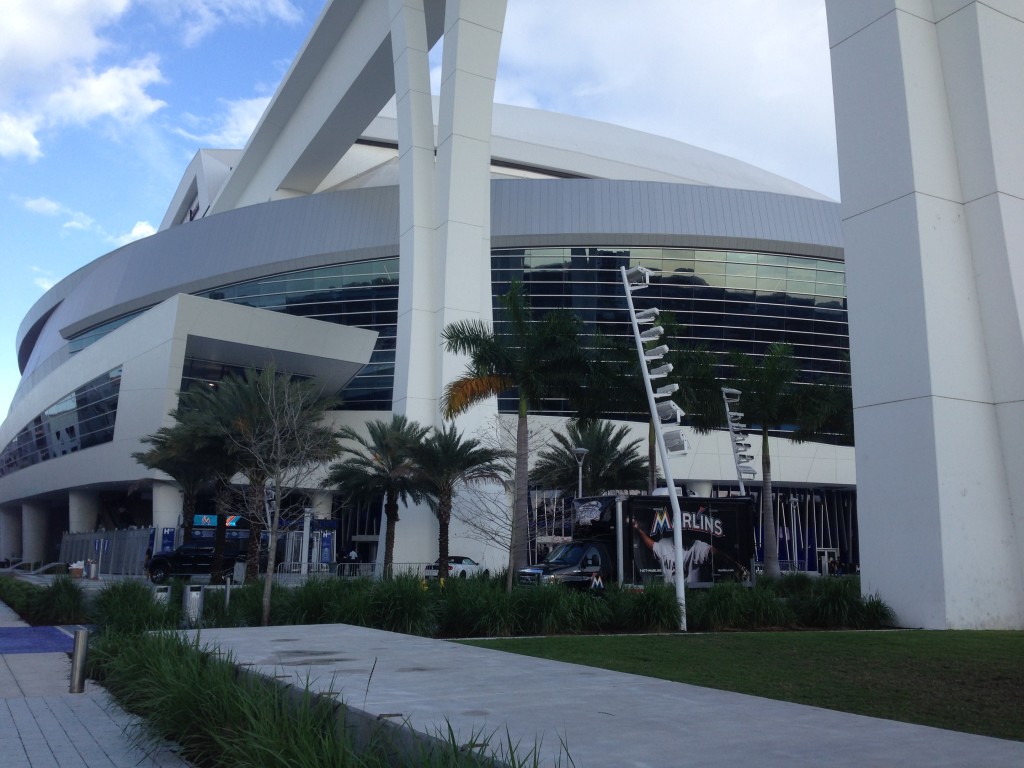 LoanDepot Park is visible for miles — nestled in a neighborhood just a few miles west of downtown Miami (technically part of Little Havana), it’s easily the biggest building around.

In short, you’ll have to plan ahead and leave early to see a Marlins game or any other LoanDepot Park event, especially if you think it’s going to be a well-attended one.

Parking lots dot the landscape among the residences and small businesses, but the most common and visible spots are the four parking garages that stand on the immediate perimeter of LoanDepot Park. There’s a chance they’ll fill up with each game, though, and the Marlins encourage purchasing a spot in advance through their website — expect to pay at least $15 if you go this route, as opposed to $20 and up for drive-up rates on the weekends.

If you’re visiting Miami primarily to see an event at LoanDepot Park, you’ll find it’s likely most convenient to stay in a hotel downtown. Cheaper lodging options can also be found at around Miami International Airport. Neither area is that close to LoanDepot Park, but there aren’t many hotels in the immediate vicinity, and those that are there aren’t really within walking distance.

And downtown Miami is a little more than two miles away, so if you’re staying in a hotel there, spending time nearby before making the drive over to LoanDepot Park isn’t a bad idea.

Before heading inside, take a moment to look at what appeared to be random letters embedded in the plaza — turns out they’re the original letters from the old “Miami Orange Bowl” sign. 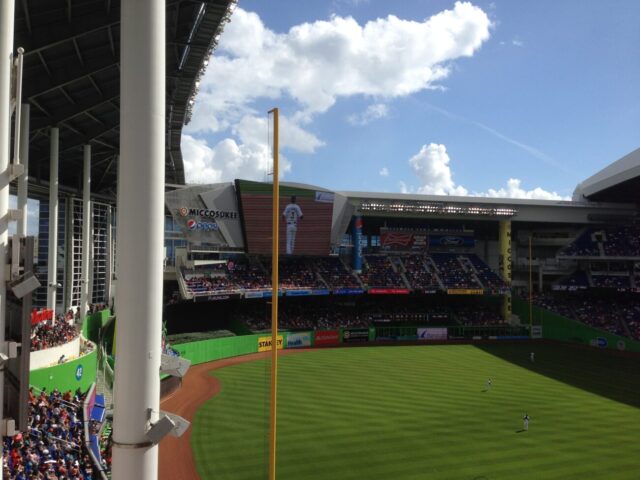 Watching a game at LoanDepot Park

Within LoanDepot Park you’ll find big, spacious concourses, a fairly cozy seating bowl as ballparks go and a few cool features, such as a bobblehead “museum” (really a large display full of bobbleheads from around the majors, complete with a vibrating case so that the heads constantly bobble) and a large mural paying tribute to the late, great Orange Bowl. You can also walk around the outfield concourse and get a glimpse at the panels that open up to let in air on not-so-hot days.

So yes, it isn’t that traditional baseball experience, but if you’re not having a good time at Marlins Park, you’re probably not trying. Befitting the Miami Beach vibe, there are a few club-like areas in which you can spend your time — a few spots are exclusive to season-ticket members, but some suites and club spaces are accessible.

Sadly, the Clevelander, one of Miami’s most famous clubs, decided to move out of Marlins Park after the 2019 season.

For the regular Joes sitting in standard spots, LoanDepot Park’s seating bowl offers little in the way of surprises. Despite having one of the smallest capacities among MLB parks, LoanDepot Park still has enough features to compel you not to linger in your seating area the entire game.

From good standing-room spots to party porches in the outfield, the ballpark promotes a social atmosphere. One of those standing-room areas was installed in left-center field, replacing the relocated home run sculpture.

Food and drink at LoanDepot Park

There’s plenty of good food options at LoanDepot Park, and it’s worth doing a little exploring to find something that fits your mood. As you can imagine, Cuban and other Latin dishes are plentiful at LoanDepot Park, including cuban sandwiches, tacos, tortas, ceviche, and more.

The Marlins have also introduced a lower-price concession menu, labeled the $3 o $5 Menu (305 being Miami’s area code). Standard stadium fare such as hot dogs, popcorn and pretzels cost $3, while 12-ounce beers and pork tacos are $5. Note that only two stands in LoanDepot Park offer these prices, on the Promenade (main) seating level next to Sections 13 and 37. 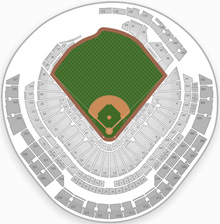