Venues Past: Looking back at Veterans Stadium’s final years 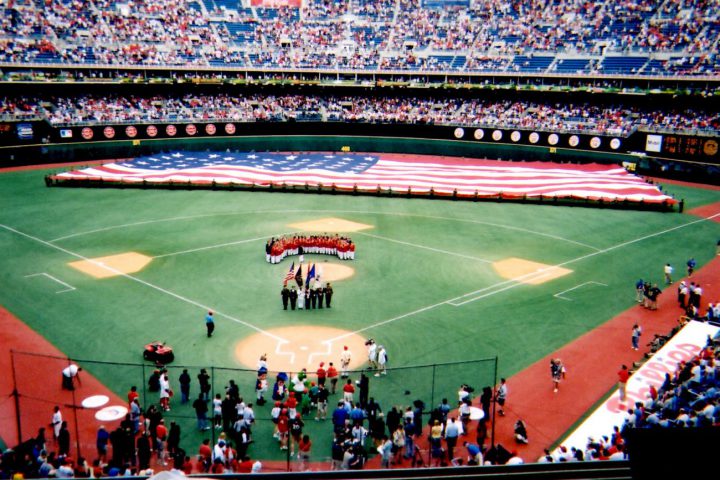 Mention Veterans Stadium to any Philadelphia sports fan with a long memory, and you’ll get a range of emotions. It’s likely that not all of them will be good, but you can bet that nostalgia will factor greatly into how that fan will feel.

Before the Philadelphia Phillies had Citizens Bank Park and before the Philadelphia Eagles had Lincoln Financial Field, the two teams shared Veterans Stadium. The venue was in use for 32 years from its opening in 1971, which doesn’t sound like that long a time — but it was plenty to pack in a lifetime of sports moments ranging from good to bad to just plain bizarre.

Willie Stargell hit a mammoth home run at the Vet. The Phillies clinched their first championship in a star-crossed history here. The Eagles got their fans’ hopes up here on many, many occasions, only to let them down each time.

The Vet became a prime example of why cookie-cutter stadiums were terrible, and why artificial turf was dangerous. By the end, the stadium was pretty roundly despised, and yet Philly fans were sad to see it go all the same.

I had a front-row seat to the final years of the Vet: as a young sports reporter for a local newspaper, I covered the Phillies and (sometimes) the Eagles here. I sat in its leaky press box many times, and watched games from the stands a few other times. I, too, thought the place was a dump, but as the new stadiums rose behind it, I started to understand why so many people would miss the Vet.

Recently, while digging through some old photos, I found a set of images that I took on Sept. 28, 2003 — the final Phillies game, and the final sporting event, at the Vet. Each image on this post is from that collection, and it’s a perfect excuse to revisit the stadium that, despite its many flaws, received as loving a sendoff as any sports venue out there. 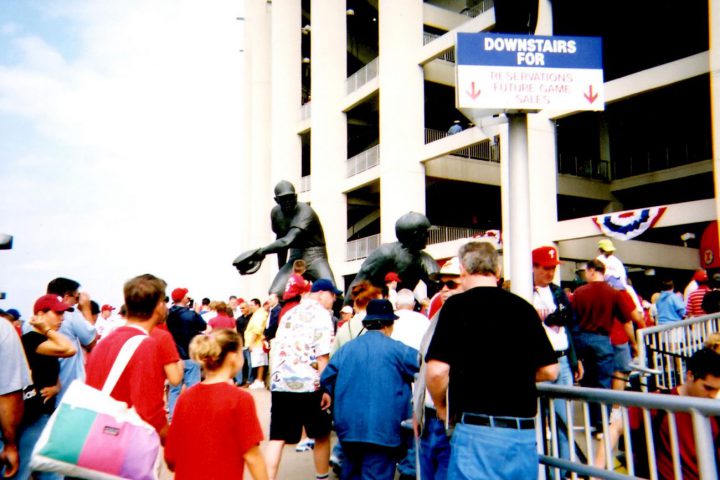 Like most of its contemporary sports venues, Veterans Stadium was concrete, it was round, it had tons of ramps, and it had artificial turf. And yet, there were were a few things about it that made it uniquely Philadelphia.

Maybe the most memorable thing about the Vet was how high the seating bowl rose. It had three tiers of seating, but both the lower and upper levels were further divided so that there were, in essence, seven seating levels, numbered 100 through 700.

The highest of these, the 700 level, is what most Philadelphia fans remember about Veterans Stadium. Other stadiums may have had similar numbering conventions that included a 700 level, but that term is ingrained in Philly sports culture — so much so that a popular and enduring sports blog took the name The 700 Level.

What made the 700 level memorable was that it was so high up, it was tough to see the action on the field — and, thus, tickets were cheap. And so the type of fan that sat in the 700 level was blue-collar and, shall we say, unafraid to speak his mind.

It’s probably fair to say that the reputation of Philadelphia fans as boorish and intimidating stems directly from the behavior of fans in Veterans Stadium’s 700 level, about which many stories have been told and written.

In the Vet’s later years, though, the stereotype of the misbehaving Philly fan became part of the negative reputation of the stadium, along with the dank hallways, leaky ceilings and infestation of rats, for which you’d often see a few cats who had supposedly been brought in to deal with them. 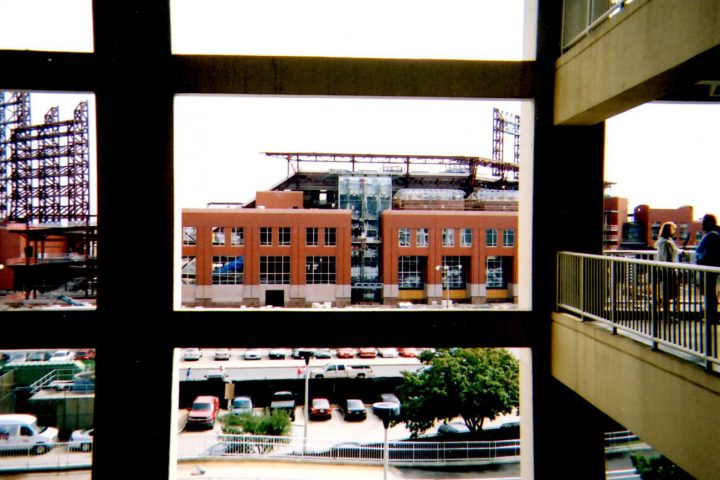 A newcomer’s view of the Vet

I admit that my perspective of Veterans Stadium is clouded slightly by the fact that I came into it late. By the time I moved to the Philadelphia area in late 2001, the new stadiums for both the Phillies and Eagles were already under construction, so everyone already knew the Vet’s days were numbered.

I was there for the final Eagles game at the Vet: the 2002 NFC championship game, in which the Eagles lost to the eventual Super Bowl champion Tampa Bay Buccaneers. Before that game, Eagles fans were as confident as I’d ever seen them: What better way to send off the Vet than by clinching a long-awaited trip to the Super Bowl? And no way the warm-weather Bucs, playing in below-freezing temperatures, would spoil the party, right?

But Tampa Bay did indeed ruin the storybook ending, and I’ll never forget descending the ramps near game’s end, as the Bucs had the game wrapped up, and seeing at least two Eagles despondent — yes, they were crying their eyes out. Just devastated.

That’s my lasting impression of Philly sports fans. Yes, they might be a little crude. But they care so damn much that it’s difficult not to have a soft spot for these guys, at least if you’re objective about it.

Eight months later, the Phillies closed up the Vet with their “Final Innings” series against the Atlanta Braves. They also had finished a season of high expectations — it was for the 2003 season that they had signed that winter’s marquee free agent, first baseman Jim Thome, to an $85 million contract — with some heartbreak, getting eliminated from playoff contention in the final week.

So the final three games were just playing out the string. On that final Sunday, with Citizens Bank Park rising in the distance, the Phillies lost to the Braves. 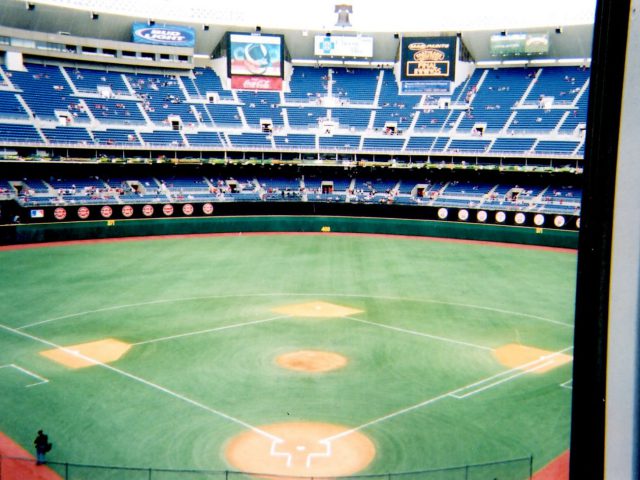 I spent a lot of the Phillies’ final game in the stands, collecting memories from fans for the next day’s story. Nearly everyone I encountered was not only pleasant but happy to talk, and reminisce. So were many of the Phillies legends who came out that day for the occasion.

While my memory of what was said that day isn’t all that clear, I can’t recall one person saying, “I can’t wait until they level this dump” or anything to that effect. Maybe that was out of respect. But it’s more likely that, as with many stadiums, the good times outweigh the bad.

After the game ended, the Phillies staged an elaborate ceremony in which the current players and legends all took the field for the final time, with beloved broadcaster Harry Kalas serving as emcee.

The most memorable moment was when former reliever Tug McGraw took the field to re-enact the final pitch of the 1980 World Series — at the time, the only championship the Phillies had ever won. It was also a poignant moment, for McGraw, who was suffering from brain cancer, would die less than four months later.

The lasting legacy of an old stadium

Veterans Stadium was imploded in March 2004, while the Phillies were in spring training prior to their first season at Citizens Bank Park. Meanwhile, the Eagles had already completed their debut campaign at Lincoln Financial Field, in which they would again reach the NFC championship game and lose.

More than 15 years later, the two franchises have made plenty of memories in their new buildings. The Phillies won the World Series in 2008, part of a glorious run in which they won five consecutive division titles. And the Eagles would finally win the Super Bowl after the 2017 season, setting off a sports celebration unlike any the city had seen.

As for Veterans Stadium, people in Philadelphia remember some of the drawbacks of the old stadium — but usually they come within the context of looking back fondly. It surely had its warts, but it was also undeniably Philly.

And most conspicuously, the large liberty bell that once hung over the 700 level at the Vet now stands near the new ballpark’s third-base gate, a reminder of the stadium that preceded it.