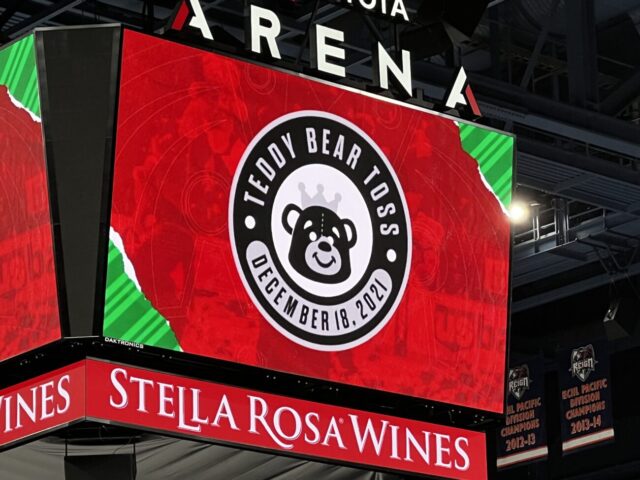 I’ve said this before: Of all the cool promotions in sports, minor-league hockey’s Teddy Bear Toss has to be one of the best.

If you’ve never heard of the Teddy Bear Toss, it’s basically one giant holiday toy drive. Fans are asked to bring a stuffed animal — or two, or ten — to the game in question. Then, at a designated point in the game, almost always when the home team scores its first goal, the fans toss their toys onto the ice, creating basically a storm of stuffed animals.

All of the toys collected are then donated to children’s hospitals and other charities to give as Christmas gifts to youngsters in need, which is why Teddy Bear Toss promotions are always held in December.

Teams in other sports also stage their own versions, but the Teddy Bear Toss is firmly ingrained in hockey culture because that’s the sport in which it began. Most minor-league teams have it as part of their promotional calendar (NHL teams aren’t permitted to hold them because the league tries to discourage having objects thrown onto the ice). 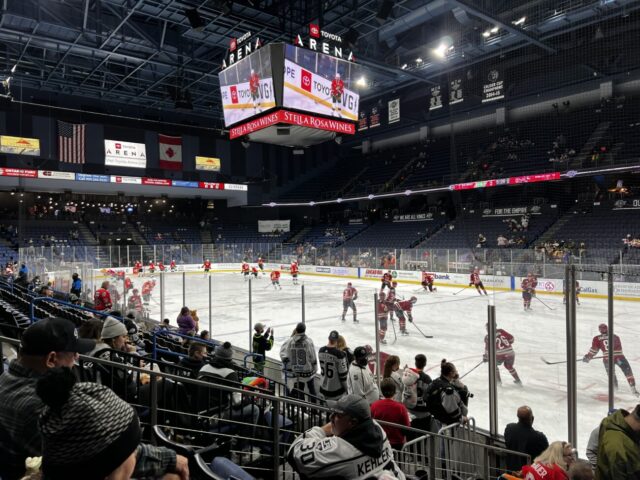 I think the thing that makes the promotion so much fun is the spontaneity of it all. You have no idea when the home team will score. It could be within the game’s first minute, or late in the game, or even never (if it appears the home team might get shut out, there’s usually a contingency plan to stage the toss during a timeout sometime in the third period).

The first time I attended a Teddy Bear Toss game, in 2019, the Reign didn’t score their first goal until late in the second period. As the game went on, you could tell fans were starting to get antsy waiting for the big moment.

For this game, though, I didn’t take it for granted. I warned my wife, Mrs. Fan, that the toss could happen pretty early in the game. When we arrived, we watched some of the pregame warmup, then she got up to get food while our daughter Little Fan and I stayed in our seats, clutching the five stuffed toys we brought collectively.

The ice was resurfaced, the teams came back onto the ice, the national anthem was played, the puck was dropped … and Mrs. Fan still hadn’t returned. I began to get worried that she would miss the toss, especially after the Reign generated a great scoring chance about a minute in (the net was pretty wide open but the puck was shot wide).

Finally, a couple minutes later, during a stoppage in play about three minutes in, she emerged and sat back down, telling us that the concessions lines were too long and she bailed without getting food. “I ain’t missing the toss,” she exclaimed, drawing a chuckle from the fan in front of her.

Her instincts would be proven right. A little more than nine minutes in, Ontario’s Martin Frk scored the first goal of the game. And that’s when the fun began.

The Teddy Bear Toss looks just as you’d expect it to look: A spontaneous shower of animals onto the ice. What’s funny is that it’s pretty hard to throw an object onto the ice from more than about 10-12 rows away, especially if the object is light as most stuffed animals are.

So if you’re sitting in the first 10 rows or so, you’re going to get pelted with bears also. Which was perfectly fine with me; I chose seats eight rows from the glass in part because I wanted this perspective.

The first time I went, I was in the first row of the second deck, which was fantastic for being able to see everything as it happened, but not great for ensuring that the toys you brought would make it to the ice on the first try.

This time around, I think that each of the toys I threw (two of my own and three more that landed at my feet, including one that struck me in the back) made it to the ice.

But to be honest it was hard to tell in all the chaos. A lot is happening, of course, so between wanting to take in the moment (and shoot video, as you can see above), throwing the toys we brought and helping along the others that wound up near me, watching to see where your throws went became somewhat of an afterthought.

It is also fun to sort of take in everything that’s going on, including: 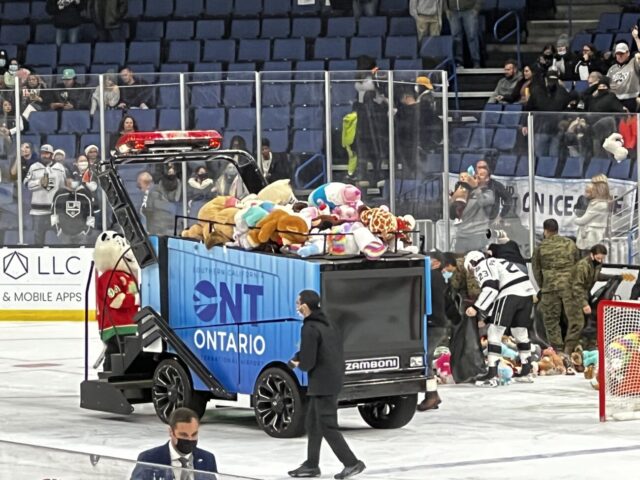 I’ll admit that once all that has happened, the toys have been taken away and play resumes, everything else from that point on is anti-climactic. You have to hope for a good game the rest of the way — and in this case it was a good one, which went to overtime before the Roadrunners beat the Reign.

But while getting to see a good hockey game is nice, let’s face it: When you go to a Teddy Bear Toss game, the game becomes secondary for the spectators on that particular night.

I personally think it’s something that all hockey fans should experience, because it’s hard to find another promotion that involves this level of audience participation — and, of course, it’s all for a good cause!

What I’d like to do is find a different team’s Teddy Bear Toss game to attend next year, just to compare experiences. Either way, just finding one is a treat and a nice way to spend a festive evening during the holiday season.