Our guide to Highmark Stadium in Orchard Park, N.Y., includes information on events, tickets, parking, public transportation, nearby hotels and restaurants, seating and more. Read on to find out how to get the most out of your gameday experience.

Over its long history, the stadium the Buffalo Bills call home has been through quite a bit.

From the team’s heyday of the early 1990s, when it reached four straight Super Bowls, to the lean years of the late 2000s and early 2010s, the stadium and Buffalo’s loyal fans have stood as a constant.

Now known as Highmark Stadium, the venue is also the answer to a trivia question involving a different sport: it hosted the first NHL Winter Classic, back in 2008, when the Sabres hosted the Pittsburgh Penguins.

In recent years, a number of renovations have gone a long way toward enhancing the spectator experience in what was already one of the more fun environments in the NFL.

Highmark Stadium is the latest name for a venue that recently went from New Era Field to Bills Stadium in quick succession. The facility has previously been known as Rich Stadium and Ralph Wilson Stadium in its long history.

Orchard Park, where Highmark Stadium is located, is a suburb about 12 miles south of downtown Buffalo. But the stadium is not far from Interstate 90, which cuts through the city, as well as Route 219 aka the Pittsburgh-Buffalo Highway. From Route 219, exit at either Milestrip Road (Route 179) if you’re heading south on I-90 or Big Tree Road (Route 20A) if traveling north, then go east toward the stadium.

If you don’t have a car, you can consider taking a taxi or rideshare, but from downtown Buffalo you’re looking at a rather hefty one-way cab fare. However, there is a shuttle service that runs to the stadium from various points around the region, including in neighboring Canada.

Yes, plenty of fans come from across the border to see Bills games, and it’s not uncommon to see many cars with Ontario license plates in the Highmark Stadium parking lots.

Highmark Stadium is surrounded by large parking lots on both sides on Abbott Road, the main drag on the stadium’s west side. Most of the outer lots are open to the public; as of the 2019 season, general parking costs $30. Be forewarned that traffic between the stadium and I-90 can get gnarly as kickoff approaches and after games.

There are also plenty of businesses near Highmark Stadium willing to offer up spaces in their parking lots for fans, with the usual discount getting steeper the farther away the lot is from the stadium. The westbound approach on Southwestern Boulevard has quite a few options, ranging from medical offices and restaurants to a tire store and a guitar store.

For visitors, there’s very little in the way of hotel and lodging selections near Highmark Stadium. You might find yourself better off choosing from one of the many hotels in and around downtown Buffalo, about 12 miles northwest of the stadium, or near Buffalo Niagara International Airport about 15 miles to the north, and then driving to Highmark Stadium on game day.

The lack of hotels and restaurants in the area also largely means a lack of foot traffic around Highmark Stadium, save for folks walking from their car to the stadium. That’s OK, because that’s a big reason why the tailgating scene is so strong before Bills games. 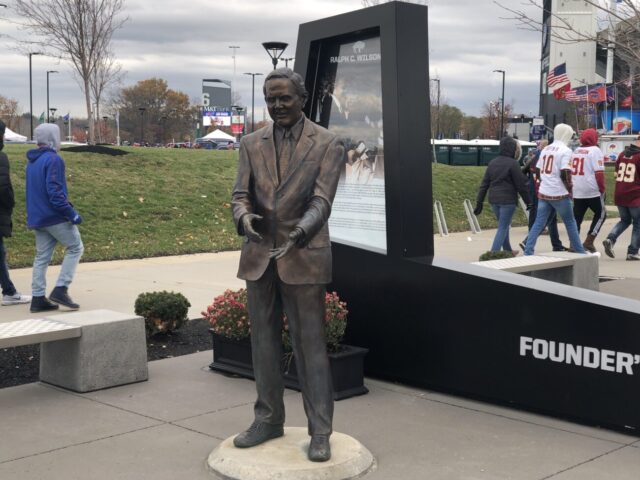 Watching a game at Highmark Stadium

It goes without saying that fans need to bundle up for cold afternoons in their seats, particularly as it gets late in the football season, but die-hard Bills fans never use the weather as an excuse for not having a good time at Highmark Stadium. So bring a nice, heavy coat, a scarf and a hat, and revel in what can often be a party atmosphere.

Highmark Stadium’s seating bowl itself has a similar feel to a college stadium, with aluminum bleacher seating in all but the lower bowl sideline sections. The benches at least have divided backs so that individual seats are more clearly delineated.

The upper part of the seating bowl is often where you can find Highmark Stadium’s most spirited fans, who are at their loudest when the Bills score and the stadium PA fires up the team’s own rendition of the song “Shout,” allowing them to scream out, “Let’s go Buffalo!”

Note that in the upper deck seating areas on both sides of Highmark Stadium, there is a concourse at the very top that have two sets of bathrooms each. There’s also limited standing-room viewing areas if you’re looking for a different vantage point or to stretch your legs a little.

Food and drink at Highmark Stadium

Highmark Stadium’s concessions options were also revamped as part of the renovation. Among the purveyors that can be found there are Tim Hortons (donuts and coffee) and Dinosaur Bar-B-Que. And it wouldn’t be a Buffalo venue if Buffalo wings weren’t available — Duff’s Famous Wings and La Nova operate stands around the stadium.

If you want to stretch your legs and get out of your seating area, you can head behind Highmark Stadium’s east end zone bleachers to the Miller Lite Brew Pub, which offers a sports bar atmosphere where you can watch the game for a bit.

Buffalo Bills vs. Carolina Panthers
Saturday, December 18, 2021
12:00 am
Get tickets at Ticketmaster » 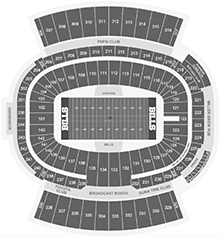