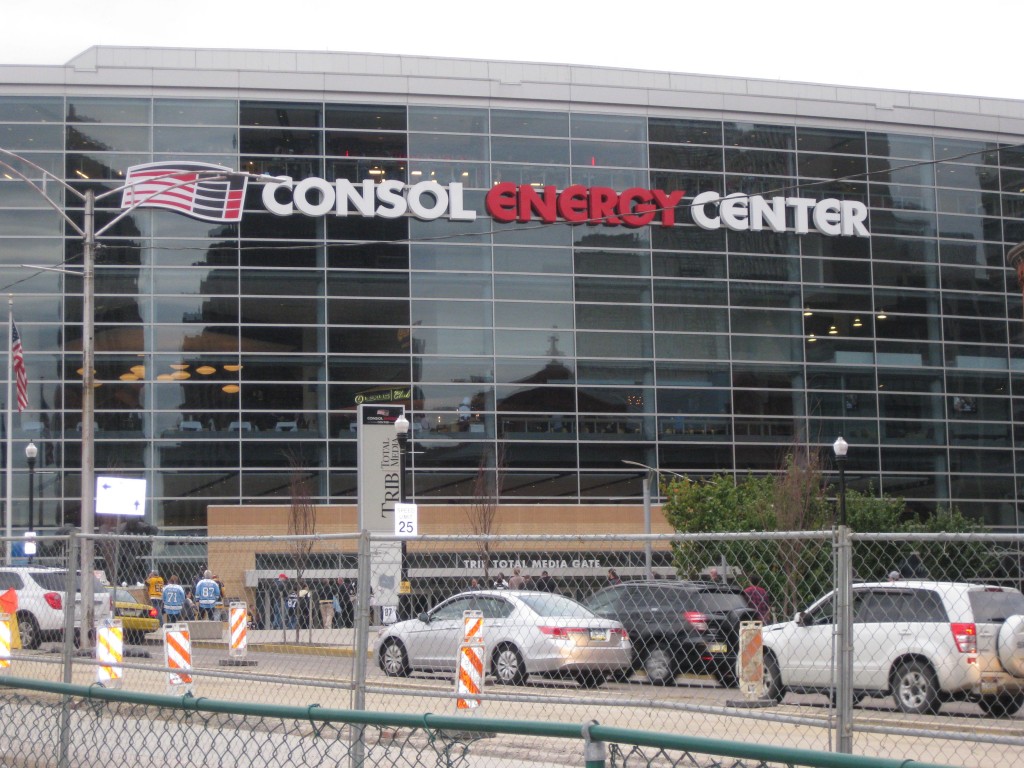 Even in a fervent sports town like Pittsburgh, it feels a little bit too easy to overlook the local hockey team. Not for the fervent sports fans of Pittsburgh, of course, but for the visitor to the city. Here’s why: Pittsburgh’s ballpark, PNC Park, and its football stadium, Heinz Field, stand just about next to each other in a prominent spot, just across the river from downtown; if you’re coming into the downtown area in a taxi from the airport, chances are you’ll spot one or both venues as you look out at the gorgeous scenery of the area (which we’ve gushed about before). Meanwhile, the Penguins’ home arena is tucked away in a less touristy part of the city, east of downtown and right next to Duquesne University; though there are a handful of prominent hotels nearby, its location makes it less likely that you’ll happen upon it while strolling about town.

But at the same time, we’re very likely underestimating the resourcefulness of hockey fans who know their way to the barn no matter what city they’re in. And once you find Consol Energy Center, you’ll find one of the nicest, sleekest buildings in the NHL, with plenty of modern amenities as well as nods to the team’s history and the region it calls home. And though it was “just” preseason, I was more than happy to have the chance to check it out when my own travels took me to the Steel City. 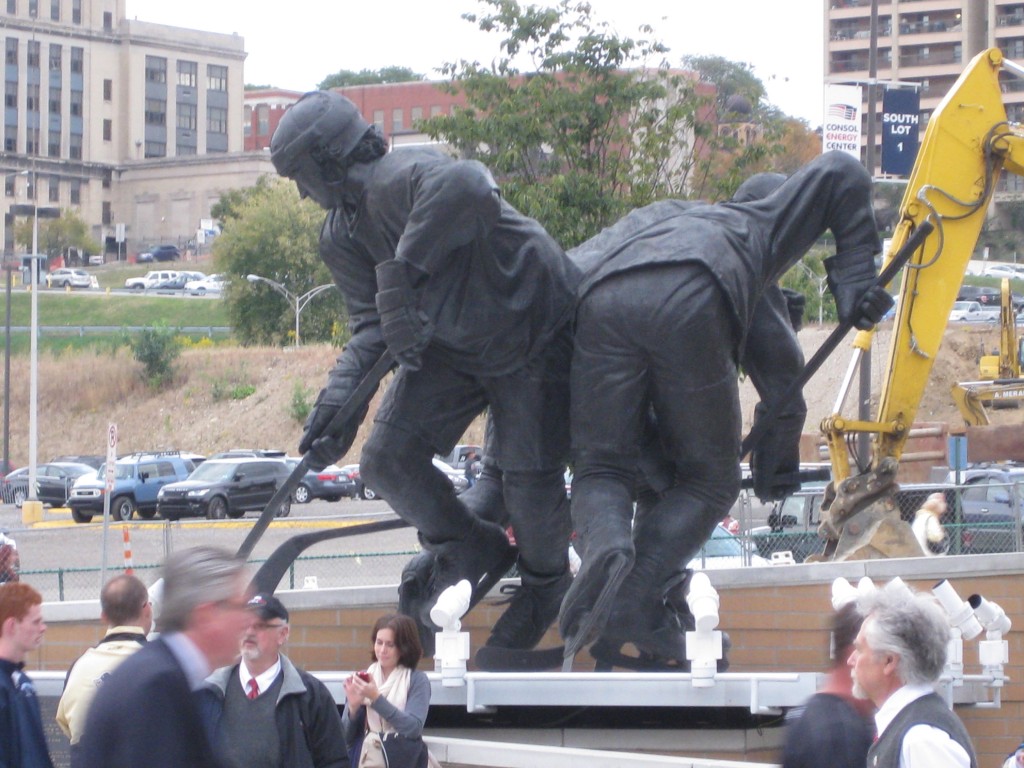 Consol Energy Center (by the way, the first word is pronounced “con-SAHL” — don’t make the mistake of saying it “console”) is located in what’s known as the Hill District, across the street from where the old Civic Arena once stood (the site is now a parking lot). You’ll know why it’s called the Hill District if you choose to walk to the arena from downtown — hope you have strong calves! — and the slope on which the arena sits makes for an interesting layout (more on that later). As mentioned early, it’s a vibrant area, just not necessarily one that the typical visitor to Pittsburgh would happen by if not a sports fan. However, both downtown and the ever-popular Strip District are within walking distance.

If you’re driving into central Pittsburgh from the outskirts, two freeways, Interstates 376 and 579, pass close to the arena. There can be plenty of traffic in the area, though, both from just the regular daily commute as well as when big events are taking place, so leaving early is always a prudent move — especially if you aren’t familiar with Pittsburgh’s street layout, which can be very confusing to the uninitiated. Parking in the area is plentiful, at least as long as that large swath of land north of Centre Avenue, across the street from the arena, remains undeveloped.

There is an alternative to driving in Pittsburgh — the city’s light rail system, known as the T. The closest stop to the arena is at Steel Plaza, a not-so-hilly three-block walk away. Taking advantage of park-and-ride using the T isn’t a bad option for any of Pittsburgh’s sports venues, Consol Energy Center being no exception. 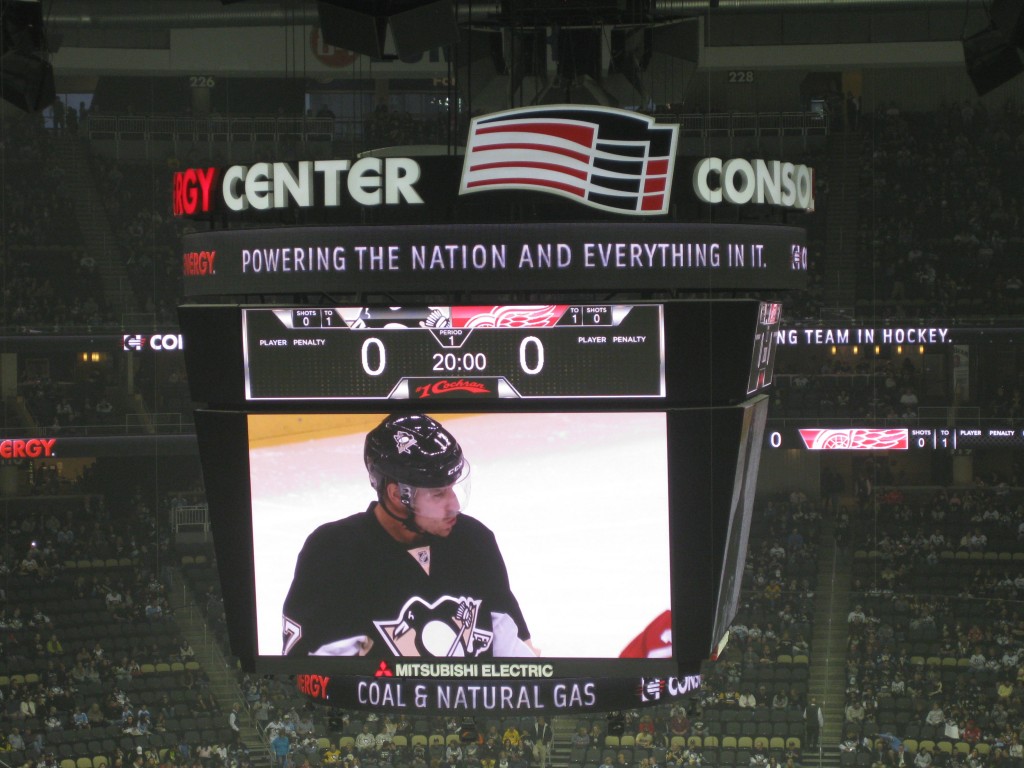 Not sure if this was because it was a preseason game and/or on a weekday, but the vast, vast majority of fans I saw outside the arena before the game were heading straight into the arena, nowhere else. That’s not to say there aren’t any options in the area, though. You’ll find the closest restaurants/bars along FIfth Avenue, across the street from the arena, and more spots can be found going into downtown.

If you don’t mind walking a bit or at least going out of your way — and it happens to be your first visit to Pittsburgh — then you might find a side trip to the Strip District worth your time. Some of Pittsburgh’s trendiest bars and restaurants sit on either Penn or Liberty avenues in this area, as does Primanti Brothers, one of the places people most identify with the Steel City. (Of course, for a sampling of Primanti’s or any other quintessentially Pittsburgh eateries, you can just wait until you go inside the arena. More on that below.) 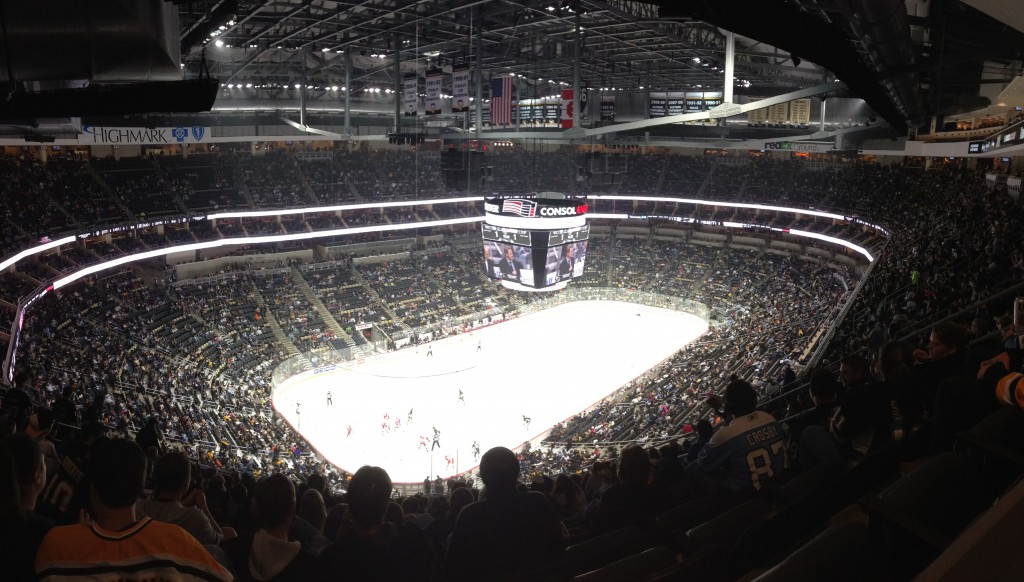 By all means, start your Consol Energy Center experience in the plaza along Centre Avenue. You’ll recognize it by the pretty cool statue of Mario Lemieux splitting two defenders (based on a famous goal from a 1988 game), and it’s a natural gathering spot for folks meeting at the game. But there’s another good reason for meeting there that I learned the hard way. Out of curiosity, I went around to the entrance on the corner of Fifth Avenue and Washington Place — a walk that, from the Centre Avenue gate, requires you go around a Catholic church that obviously was there well before the arena was and then down a hill. After getting my ticket scanned, the only way to go was up a long escalator to the event level, putting me right back where I came from: the entrance with the Lemieux statue in front of it. So I guess what I’m saying is, don’t go down the hill unless you have to.

Once inside, though, there’s plenty to see, starting with the pretty large “PensGear” team store right inside the main gate. It takes another trip up an escalator to reach the concourse level, on which you’ll find more souvenir shops as well as some cool displays (I particularly liked the one with jerseys from youth teams in the region; a lot of kids I saw fancied the giant goalie mask that they could walk inside and pose for pictures).

Also, if you’re coming this way, make a right turn off the escalator for your most immediate survey of food selections. There’s a row of food stands at one end of the rink, where you can choose from Primanti’s, gyros (readily available around Pittsburgh), specialty sausages and more. Also, popular local eatery Burgatory operates a stand not far away. But as tempting as burgers sounded, I was spending only one night in town, so the Pittsburgher from Primanti’s (basically a burger given the french-fries-and-cole-slaw-on-top treatment) was really my only choice. (Note: If you’re sitting on the upper level, get your Primanti’s fix before you head up, ’cause there’s only one stand in the arena.)

Other than the Penguins decorations and the Pittsburgh-specific concessions, though, it’s a pretty standard modern arena with good sightlines. I had upper-deck seats, in the first row behind the net where the Pens shoot twice, but I only stayed there for a period before staking out different standing-room only spots for the remainder of the game. The spots in the upper deck offer surprisingly clear views of the ice (the concourse is above the upper-deck seats, so you’re walking down to any seat on that level), but there are also good lower-level spots in the corners and behind the nets if you can get to them. Of course, during the preseason that’s no problem, and despite the Pens’ loss to open up the exhibition slate, I felt I got a pretty good taste of what life is like for the puckheads in Pittsburgh.