My triumphant return to live sports: A night at Dodger Stadium 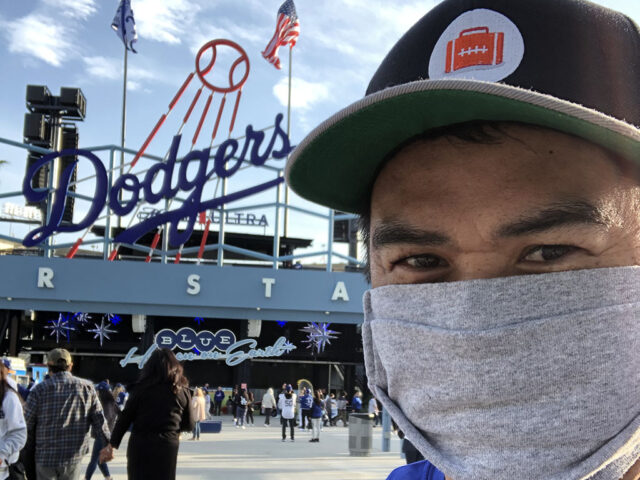 Last week, I did something that I had done hundreds of times previously but, at one point, was wondering if I would ever have the chance to do again: watch a live sporting event.

On the surface, there was nothing remarkable about my visit to Dodger Stadium on April 14. I live 10 minutes away — it’s the closest major sports venue to my house — so it was a quick drive.

Myself, my wife and my daughter sat in the reserve level and enjoyed a cool evening and a Dodgers win over the Rockies. I ate a Dodger Dog. We stopped by the team store and bought my daughter a toy bat and ball.

Just another night at the ballpark. And as we all know, it represented so much more.

Though other places have staged sporting events open to fans as far back as September 2020, last week marked my first chance to get back into a stadium since before the pandemic began.

I absolutely expected being excited about it, but I think I was quite surprised by how sentimental I got.

So no, it wasn’t just another night at the ballpark. It was an experience I’ll remember for a long time to come. 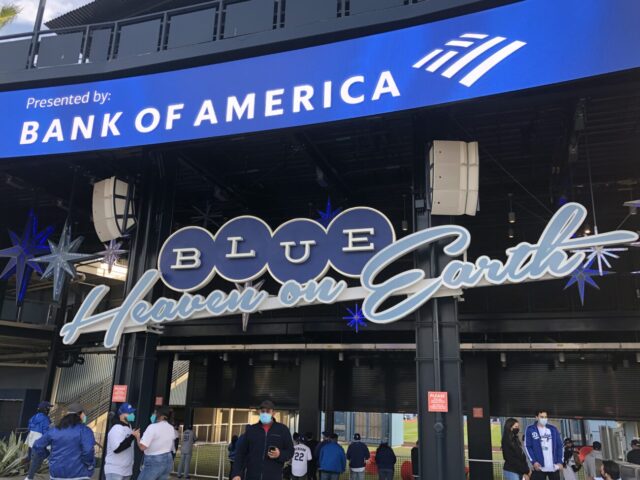 For me, and I imagine most Dodger fans, coming to the ballpark for the first time since 2019 meant a long-awaited chance to see the center-field plaza that was supposed to debut for the 2020 season — a year in which Dodger Stadium was set to host the MLB All-Star Game. (Now they’ll be hosting in 2022 instead.)

Why is this new plaza a big deal? Well, Dodger Stadium didn’t really have a central gathering point like most ballparks; fans arrived, entered at whichever level they had tickets for (because of how the stadium was built into the side of a hill) and stayed there for the duration of the game.

In essence, the plaza gives fans a starting point for exploration — a quality that all popular stadiums share. I made it a point to enter through the center-field gates, and just anecdotally, it sure seemed a majority of fans on this night intended to do the same.

The plaza itself is, surprisingly, something of a work in progress. It’s likely that some of that is due to COVID restrictions, as I’m sure they don’t want too many people congregating in the area.

Notably, a number of the concession stands in the area, including a Shake Shack, remained closed. But it’s still plenty worth it to see some of the exhibits devoted to the Dodgers’ long history, a statue of Jackie Robinson in mid-slide (moved from another entry plaza), a large display of the Commissioner’s Trophy commemorating last season’s World Series championship, and — my daughter’s favorite — a giant glove.

If your seats are in anything but the field level, you have a bit of a challenge getting to the appropriate level from center field. If you want to take an escalator or elevator, you’ll have to walk the field-level concourse all the way to home plate. Otherwise, there are stairs if you’re OK with hoofing it. 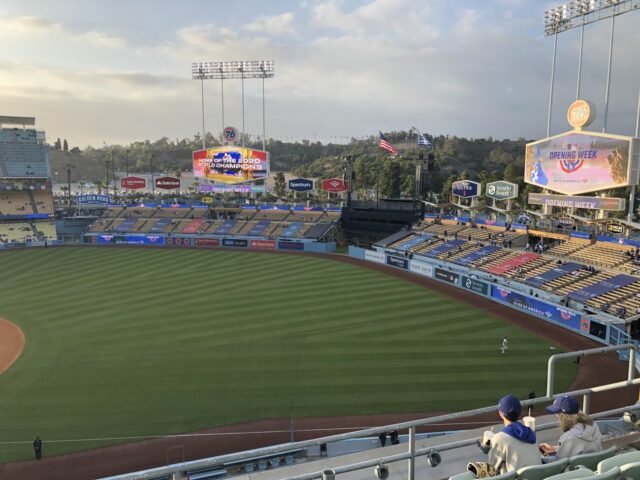 There were two particular instances in which I felt like this ballpark experience was different from any other: 1) Whenever I was aware of the mask I was wearing, which truthfully only occurred when I was lowering it to eat or drink something, and 2) while surveying the stands during gameplay and noting the less-than-random pattern in which fans were separated.

Of course, I had no perspective before this night about attending a game in a socially distanced stadium. I thought I would be more hyper-aware of it than I was, and I wondered how adversely it would affect the experience. Would I get annoyed if people got too close? Would I see a bunch of people throwing all protocols out the window?

After the fact, I can definitively say no to both those questions. Did people get within six feet of me? For sure, but only to pass by, and when you’re at a large-scale public event, it’s pretty unreasonable to expect everyone to keep their distance.

As for protocols, yes, people did not always keep their mask on when sitting at their seats. That may worry some fans, especially when something happens in the game that compels people to yell and cheer, but the distancing in the seating sections meant to me that there was no real concern about people getting too close.

Another touch that I did not expect but came to appreciate: Any seat that wasn’t ticketed was tied up with zipties, meaning no one could sit outside their pod even if they wanted to.

So basically, you’re sitting at a ballpark enjoying a game, with no one around you, allowing you to put your feet up on the seat in front of you and place your drink on the ground away from your feet. What’s not to like about that? 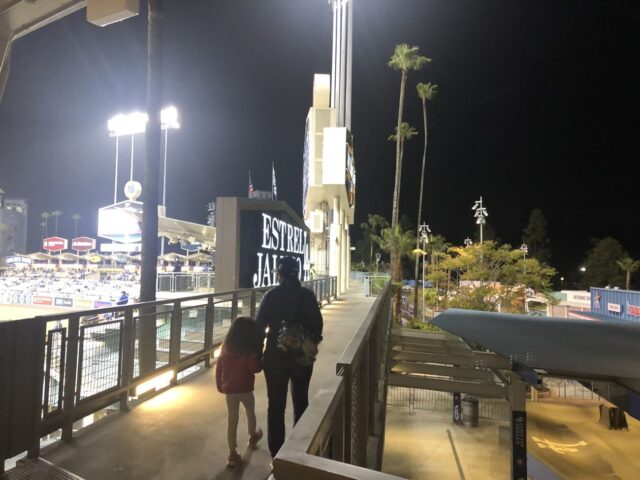 The game was entertaining — the highlight being Justin Turner hitting a home run into a plate of nachos, splattering a poor guy with processed cheese (though he did wind up with the ball, a couple gifts from the Dodgers and a whole lot of attention) — but, owing to having a 5-year-old in tow on a school night, we got up to leave around 9:30 p.m.

But on our way out, we made it a point to walk along the Boardwalk, a new concourse that extends behind the outfield pavilion sections. This is another significant addition to the Dodger Stadium ambiance in that, before, the pavilions were something of an excluded section — cheap seats, for sure, but if you had pavilion tickets, you didn’t have much access to the rest of the ballpark.

Walking along this concourse gives you a different perspective of Dodger Stadium, one that is readily available at a lot of MLB parks. I thought there would be standing-room spots that allowed fans to stand and watch the game, but alas, those are ticketed sections. Still, it was nice to see what it was like.

Also on our way out, we stopped by the team store and dropped some coin on souvenirs for my daughter, including the toy bat and ball mentioned above. And we admired the center-field plaza, this time in the dark.

And then we headed out into the night, happy to have experienced something we’ve done dozens of times before, yet felt as new and exciting as ever.