Our guide to American Family Field in Milwaukee includes information on events, tickets, parking, public transportation, nearby hotels and restaurants, seating and more. Read on to find out how to get the most out of your gameday experience.

So it would stand to reason that Milwaukee’s major-league ballpark would be a quaint, old-timey and cozy venue. But American Family Field, home of the Milwaukee Brewers, is far from that.

Once you get inside, though, it really doesn’t matter if the ballpark seems out of place for the city it’s in. The Brewers have made it their own, and the fans come in droves regardless. Though when the home team is thriving, it makes for a pretty spectacular atmosphere.

American Family Field, as most baseball fans know, was known as Miller Park for the first 20 seasons of its existence before the name changed in January 2021. Though there’s no denying that a beer company was the perfect naming sponsor for the home stadium of a team called the Brewers, it doesn’t stop American Family Field from rockin’ as usual when the home club is flourishing.

American Family Field might blend in more with its surroundings if it were situated downtown, but it lies a few miles west, past downtown and the busy district surrounding Marquette University. So, looking west from downtown, the ballpark dominates the landscape, sitting alongside Interstate 94.

The Milwaukee County Transit System (MCTS) runs a dedicated bus line from downtown to the ballpark, known as the Brewers Line, that begins 90 minutes before each game and travels back for 60 minutes afterward; the standard bus fare of $2.25 per ride applies. From downtown, the ride lasts about 20 minutes with stops.

Or, you can find a restaurant or bar that offers a free shuttle to the game, and there are a few of them. They all drop off patrons just steps from the ballpark’s main entrance — not far from where the bus drop-off is. If you’re staying in a hotel outside downtown Milwaukee or otherwise coming to American Family Field from a suburban starting point, this is a method worth considering.

American Family Field is surrounded by several large parking lots, many of which are named after past Brewers or Milwaukee baseball greats like Paul Molitor, Warren Spahn and Eddie Mathews.

Parking rates begin at $15 for general parking — though you can save $3 by purchasing your parking pass in advance — and rise to $20 for weekend games, Opening Day and games against the Cubs, for which many visiting fans make the 80-mile trek north from Chicago.

As previously mentioned, American Family Field is not downtown, and thus there isn’t much around in the way of restaurants, bars or hotels. Your best bet for pregame entertainment, food or drink is to hang out downtown or, even better, at one of those restaurants/bars that provides a free shuttle so that you can party and then not have to worry about driving yourself to the ballpark afterward.

But it’s a tradition in Milwaukee, too (does any state do tailgating better than the state of Wisconsin?), and even for midweek games it’s not uncommon to see folks in the American Family Field parking lot tailgating an hour and a half before first pitch. I mean hanging out on lawn chairs, grilling brats, throwing baseballs around, the whole nine yards.

So if you know a local, or aren’t shy about sidling up to a party and introducing yourself, you can get your tailgate on before a Brewers game. 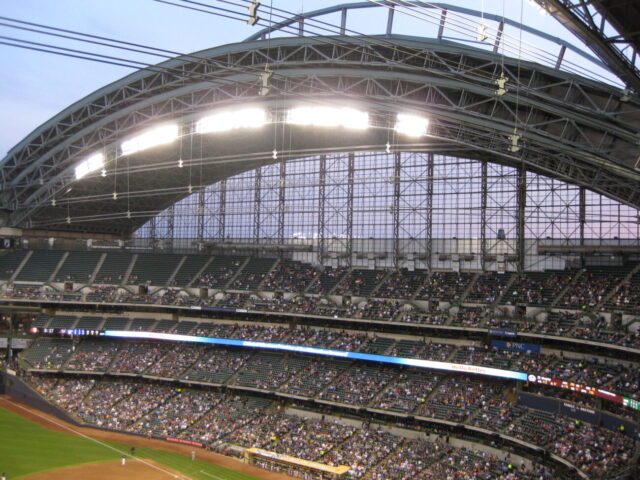 American Family Field is a big ballpark, as evidenced by a pretty sizable structure and a large seating bowl. So there’s a lot to see, starting outside the home-plate gate.

For my most recent visit, my seat was in Section 422, on the upper deck right behind home plate. Looking at the seating chart, those should be prime seats for the price, but what most American Family Field seating charts don’t tell you is that there are two very wide pillars in that area (Sections 421-423), and depending on your exact seat they could block views of semi-important things such as, oh, home plate or the mound.

Look up and you’ll see the pillars are very necessary, as they support the fan-shaped retractable roof right at its joint. It’s something to keep in mind as you plan your American Family Field visit, if you wish to find seating in the upper deck behind home plate.

The seats at the very top of these sections are known as the Uecker seats and if you sit there (the Brewers sell those seats for $1), you’ll be kept company by a statue of Uecker –though it’s typically guarded by a stern-looking usher who won’t let you take pictures while the play is in progress.

It pays to be observant during a Brewers game, so stay in your seating area as much as you can lest you miss all the fun at American Family Field. First, there’s the famous sausage race — do NOT plan on leaving your seat once the top of the sixth inning starts lest you miss it — it starts and ends pretty quickly.

Food-wise, Wisconsin is known for sausages and beer, and you can find those in abundance at American Family Field. In Wisconsin it’s hard not to automatically think bratwurst, and those are available at pretty much every other stand in the park. 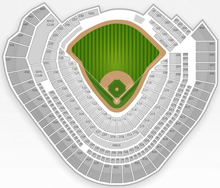