Our guide to Canada Life Centre in Winnipeg includes information on events, tickets, parking, public transportation, nearby hotels and restaurants, seating and more. Read on to find out how to get the most out of your gameday experience.

Canada Life Centre is one of the smallest arenas in the NHL capacity-wise, but fans of the hometown Winnipeg Jets probably don’t care.

When the team finally returned to the playoffs in 2015, the familiar “White-Out” that greeted the team in past playoff runs came back with it. And when Winnipeg advanced all the way to the Western Conference finals in 2018, the fervor that accompanied home games at what was then known as Bell MTS Place provided a glimpse of what things could be like if the team finally captures the Stanley Cup.

Whether the team makes the playoffs or not, the team’s barn in the heart of downtown has an atmosphere any NHL fan should check out. If anything, the curiosity of checking out a city that is largely unknown if not for sports for people outside Canada would make a journey to Canada Life Centre worth experiencing.

While Winnipeg itself isn’t an easy place to get to considering its somewhat isolated spot in the Canadian Prairies — at least if you’re coming from the United States — Canada Life Centre is easy to find once you arrive. It’s located downtown along its most well-known street, Portage Avenue. It’s also just a few blocks away from the city’s most well-known intersection, Portage and Main.

The arena estimates that there are 7,000 parking spaces within a five-minute walk of Canada Life Centre. A detailed map of parking options around downtown Winnipeg can be found here.

Given Canada Life Centre’s prime location downtown, there are many options for pregame eating and drinking. One is attached to the arena — Moxie’s Grill and Bar, a Canadian chain. Lots of downtown restaurants and pubs are good for watching Jets home games if you don’t have tickets to go inside the arena.

If you’re not Canadian, don’t be shy about trying one of the chains nearby, as the experience will likely be new to you. Some of the chains within a few blocks of Canada Life Centre include Boston Pizza and The Keg.

It goes without saying that during harsh winter evenings, you won’t find many people roaming the streets of Winnipeg prior to Canada Life Centre events. However, many of the more popular establishments will be plenty busy as people stay out of the cold for as long as they can. 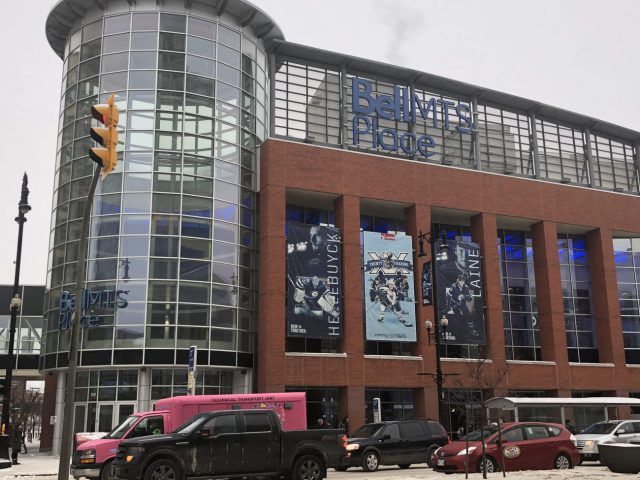 With a brick exterior and circular atrium at its main entrance point, Canada Life Centre appears to blend in well with the buildings surrounding it. If you enter at this point, you’ll pass the turnstiles and then climb up a set of stairs to reach the main concourse level, where the Winnipeg Jets team store, a bar and more await. The mood lighting, in Jets blue, covers much of this area and provides an interesting touch to the atmosphere.

Once inside Canada Life Centre, it’s cozy but not tight, not surprising given the size of the arena, and the seating bowl is pretty standard-issue for a hockey and events venue. Thanks to its relatively small size, even the uppermost seats don’t feel too far removed from the ice. Our seats were about 10 rows up in the upper deck, behind one of the nets, and we could see the entire rink without issue.

The Jets added a new high-definition video board above center ice for the 2015-16 season, as part of a rolling set of renovations planned for coming seasons. New railings and glass panes added to the aisles in Canada Life Centre’s upper seating bowl caused fans to complain about obstructed views, which the team has promised to address.

Concessions options at the arena include the presence of several chains, including Tim Hortons and Pizza Pizza, throughout the concourses. A hot chocolate and a box of Timbits seemed like popular options among the fans on the night we visited, based on the red cups we saw around Canada Life Centre’s seating bowl.

There’s also a sit-down restaurant on the event level called the Exchange Restaurant and Beer Market, open during Jets games and all other Canada Life Centre events. Reservations are required at least 24 hours in advance, and the restaurant is accessible only after guests have passed through the turnstiles.

Canada Life Centre’s management company recently chose to drop prices on some of its concession items, including domestic draft (C$7.50) and canned beers (C$7.00). While Anheuser-Busch brands are widely available, including options from Mill Street Brewery, based in Toronto. 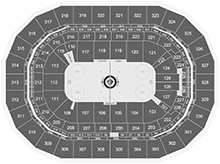