Our guide to the Mercedes-Benz Superdome in New Orleans includes information on events, tickets, parking, public transportation, nearby hotels and restaurants, seating and more. Read on to find out how to get the most out of your gameday experience.

In New Orleans, home of many iconic places and structures, the Mercedes-Benz Superdome — home of the New Orleans Saints — still stands out as an instantly recognizable building in the skyline of the Big Easy.

In the sports world, its legendary status is secure thanks to a history that includes eight Super Bowls, five Final Fours, countless important college football games and, of course, many New Orleans Saints games.

And you can no longer talk about the Superdome’s history without mentioning what happened during Hurricane Katrina in 2005, or how the rehabilitation of the stadium and the return of the Saints a year later helped revitalize a downtrodden city.

Whether your travels to New Orleans are sports-focused or are simply there to see everything the city has to offer, seeing the Saints or any other event at the Superdome is a worthy item to have on your Big Easy itinerary.

We took the time to check out the joint, which remains the world’s largest fixed-dome stadium, for a late-regular season New Orleans Saints game.

Getting to the Mercedes-Benz Superdome

The Superdome (originally known as the Louisiana Superdome before Mercedes-Benz bought the naming rights in 2011) is a huge structure that’s easy to spot from many angles when approaching the downtown area. And because it has been home to so many high-profile events, it’s easy to recognize whether you’re an avid sports fan or not.

Interstate 10 runs right by the facility as it makes a 90-degree turn while cutting through the city’s Central Business District — follow signs for nearby exits as you approach. (Coming from the west, the Superdome-Claiborne Avenue exit is most prominent, and the stadium is directly in front of you.)

If you’re visiting, chances are you’re staying in a hotel. Most of central New Orleans’ major hotels are located between the popular French Quarter and the Superdome — the closest one is the Hyatt Regency, practically next door — and are within relatively easy walking distance (read: a mile or less). Girod or Poydras streets offer the most direct access.

If you don’t feel like hoofing it, riding one of the city’s famed streetcars to the game is a viable option. The Loyola-UPT line runs along Loyola Avenue, just a couple blocks east of the stadium, and has several stops that are convenient.

The stadium is surrounded by a number of parking garages (most of which are attached to the building) and lots that service both the dome and the adjacent Smoothie King Center.

New Orleans hotels near the Superdome

Map of the Mercedes-Benz Superdome area

Things to do around the Mercedes-Benz Superdome

You’re in New Orleans! If there’s anything they do right, it’s partying, whether there’s a football game or not.

Just stroll down Bourbon Street on a gameday and you’ll find Saints colors, jerseys of that day’s opposing team and even a few random NFL jerseys. And the same goes for college football, college basketball or anything else happening at the dome.

If you’re looking for a good pregame option for eating or drinking, you have dozens if not hundreds of options in the French Quarter and Central Business District, including nearly all of the places you’ve likely heard of even if you’ve never been to New Orleans before (Mother’s, K-Paul’s, Pat O’Brien’s, Acme Oyster House and Cafe Du Monde, to name just a few). You can find a guide to French Quarter establishments here, and a list of popular gameday bars here.

Keep in mind that the deeper into the French Quarter you get, the farther you’ll have to walk to get to the Superdome for your event. If you are north of Canal Street, count on a walk of at least a mile; if you’re close to the Mississippi River, boarding the streetcar becomes an attractive option.

There are a handful of restaurants closer to the Superdome, including establishments that cater to sports fans and other patrons stopping in before Superdome events. But if you’re looking for “famous” eateries, you’ll have to head to the French Quarter.

New Orleans restaurants near the Superdome

Watching a game at the Mercedes-Benz Superdome

Despite fairly limited space for parking around the stadium, there’s still plenty of tailgating going on. For Saints games, they utilize a plaza just east of the Superdome, next to the Hyatt Regency, called Champions Square, for pregame parties and other events — admission is free and the festivities include live music, food and drink and more.

In addition, next door is a private party area the team has christened “Club XLIV,” in homage to the Saints’ lone Super Bowl championship, that is accessible to groups for a fee.

You’ll have to go up either steps or a ramp to reach the plaza surrounding the Superdome. Look out for the “Rebirth” statue that the team placed in the plaza’s southeast corner in 2012, depicting Steve Gleason’s famous blocked punt.

Once you’re inside the dome, you’ll be able to appreciate the sheer size of it. Any stadium that has a level of sections numbered in the 600s must be pretty big, and you’d be right to assume that the uppermost seating areas at the Superdome are both really high and really far away.

In fact, the Superdome’s highest rows are so high up that there are two concourses for the 600 level, and escalators are available for patrons seated in row 20 or higher so that you don’t have to hoof it up steep aisle steps.

The Superdome’s round shape means the highest seating rows are at least only along the sidelines, so what you lose in distance from the field you at least make up for in being closer to the 50-yard line. If you still have trouble seeing, at least you can catch some of the action on the gigantic new HD screens installed behind each end zone prior to the 2016 season. Meanwhile, the concourses are surprisingly narrow, even on the main level, leading to the crowded feel.

There are four different concourse seating levels at the Superdome, with the majority of the attractions being on the 100 level, including the Saints team store and Saints Hall of Fame (both between Gates A and B).

The stadium’s concessions options aren’t exactly diverse but do include a few New Orleans staples among the usual hot dogs and pizza. You can get alligator po’-boys, fries topped with roast beef “debris,” beer-can chicken bowls and Cubano sandwiches.

Upcoming Events
All times local
Battle Of The Bands: Battle of the Bands
Friday, November 27, 2020
6:00 pm
Get tickets at SeatGeek » 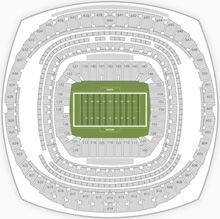