Our guide to Amway Center in Orlando includes information on events, tickets, parking, public transportation, nearby hotels and restaurants, seating and more. Read on to find out how to get the most out of your gameday experience.

The city of Orlando is known the world over for Walt Disney World and all the other amusements and family-friendly activities available there. With so much to do there, you might think there’s not much room for spectator sports on the agenda.

But thanks to the Magic and Amway Center, the NBA is a big draw and a worthy reason to get away from the theme parks for at least a few hours.

Over the years, the Magic have entertained their faithful with two distinctly notable eras built around two dynamic centers — first Shaquille O’Neal, then Dwight Howard — that each produced a trip to the NBA Finals, but neither resulted in a championship.

Though Magic fans are still waiting for that title, they can still watch an up-and-coming team in a beautiful, modern arena that’s part of a burgeoning district of downtown.

The Magic aren’t the only attraction at Amway Center, either — the Orlando Solar Bears minor-league hockey team plays home games there, and it’s a popular attraction for major concerts and other events.

For visitors, getting to Amway Center requires a bit of a detour from all the other touristy things going on in Orlando and throughout the Central Florida region. Find out more below.

Most of Orlando’s theme parks are located miles southwest west of downtown, and in Walt Disney World’s case, it’s more than 20 miles away and not even within the city limits (it’s located in a Disney-created town called Lake Buena Vista).

If family fun is part of the reason you’re in the area and you’re staying in one of the many hotels located near one of the amusement parks, getting to Amway Center requires a quick drive eastbound on Interstate 4 toward downtown.

The arena, located alongside I-4, is easily visible on the west side as the highway cuts through the downtown area. Exit at South Street to get downtown, and you’re at the arena’s doorstep.

The same directions hold true if you’re attending a convention in Orlando, another big draw for the city — the massive Orange County Convention Center lies alongside I-4 about 10 miles south of downtown, and many hotels are located near the convention center.

If you’re not coming from the theme-park area, Orlando’s SunRail train system is a viable option for getting to the game. The train runs a north-south route with a stop at Church Street, a block from the arena. One-way fares range from $2 to $4 depending on distance traveled.

Once you’re downtown, you can find ample parking around Amway Center. The Geico Garage located just south of the arena, across South Street, is accessible to attendees who purchase parking in advance via Ticketmaster.

General parking for Amway Center events can be found east of I-4, throughout downtown Orlando. There’s a large parking structure at the Church Street Marketplace shopping center, two blocks east of Amway Center, and numerous smaller lots and structures if you head north along Garland Avenue.

Rates typically begin at $10 and up depending on the Amway Center event. Click here for a map of downtown Orlando parking options.

Downtown Orlando, like many other downtowns around the country, has enjoyed an influx of new residents in recent years thanks to a building boom, and as a result there’s more nightlife and activity in the blocks near Amway Center.

The arena has its own restaurant that is open to the public on event nights. Called the Magic Grill, it’s located at the northwest corner at Church Street and Division Avenue.

Amway Center is next to what’s known as the Church Street District, a retail and entertainment district full of restaurants and bars. This area tends to take on a more upscale and sophisticated feel than the family-friendly chains that tend to proliferate near the theme parks.

Popular options for fans prior to Magic games or other events at Amway Center include Hamburger Mary’s and The Rusty Spoon, both located on Church Street next to the SunRail station.

The Parramore neighborhood west of Amway Center is a historic district that has seen an increase in development in recent years largely due to the opening of the soccer-specific Exploria Stadium a few blocks away. A handful of neighborhood bars and coffee shops can be found on Church Street, Central Boulevard and surrounding streets. 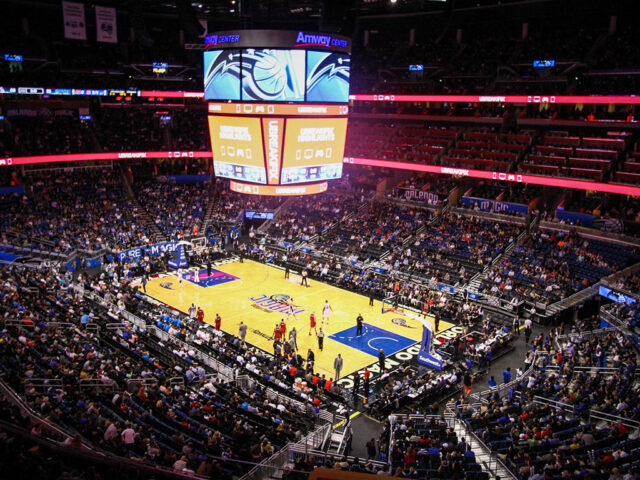 Watching a game at Amway Center

Amway Center is appreciably big for an NBA arena, much bigger than the building it replaced, the Orlando Arena — which once stood about a mile north of the current arena before being demolished in 2012.

The large glass facade that faces Church Street serves as the main entrance, accented by a spire at one corner of the arena that lights up in the Magic’s blue and silver colors on game nights. Church Street is typically blocked off to traffic as tipoff gets closer and gets turned into a plaza for pregame activities.

After entering, the first thing fans see is a grand, glass-covered atrium. The Magic’s team store is located at this level as well. From there, patrons must ascend stairs or escalators to reach the main concourse (known here as the Terrace Level).

Also notable at Amway Center is the number of sit-down restaurants, bars and lounges inside, throughout the concourses and seating bowl. Many are limited to fans holding club-level tickets, but one, the Budweiser Baseline Bar on the Terrace Level, is accessible to everyone and worth checking out — it opens up to the seating bowl and offers standing-room views of the game.

There’s also a lounge located at the top of the arena called the One80 Lounge, within the spire structure. It opens to all patrons at the conclusion of games or events and remains open until 2:30 a.m. every night.

Families haven’t been forgotten, though. Amway Center’s Promenade seating level includes a play area called Stuff’s Magic Castle — which gets regular visits from the Magic’s mascot, Stuff the Magic Dragon. Also on the Promenade Level is a food stand geared toward kids, with items like chicken nuggets and cotton candy available.

Going to Amway Center can take on a club-like atmosphere, but the game remains the centerpiece. Despite Amway Center’s size, sight lines are terrific throughout the upper seating bowl for all sports.

When the building opened, it boasted the tallest center-hung scoreboard in the NBA, though its size has since been surpassed by several arenas as large horizontal screens have come into vogue.

Food and drink at Amway Center

The concessions choices at Amway Center draw on local flavors and merchants. Check out the Gringos Locos stand on both the Terrace and Promenade levels for tacos and nachos, including the Double D’s (crunchy tacos wrapped with a cheese-filled soft tortilla).

Head to the Craft Beer Bar on the Terrace Level for a selection of beers. Kona Brewing Company has a handful of carts on both concourses. 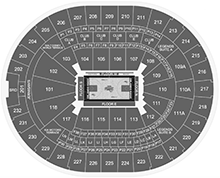